On Thinking....and Baseball....and Thinking on Baseball


"First principles. Simplicity. Read Marcus Aurelius, of each particular thing ask what is it in itself, what is its nature." -- Hannibal Lecter


I've seen The Silence of the Lambs a number of times, but I never understood the power of this borderline throw-away-line from Hannibal Lecter. Evidently it gets lost in Hannibal's neatly tailored prison jumper and psychotic unblinking gaze, but it's an idea worth chewing on...so to speak.

To me, first principles is about getting vertical with your thinking. The good doctor cites to Marcus Aurelius, but the credit more properly belongs to Aristotle. Adopting first principles leads to a simple shift in thinking, but one that unlocks an entirely new perspective. If you reason from first principles, then you are simplifying things down to their fundamental truths and then reasoning up from there. The more common style of reasoning is by analogy, which is a more lateral style of thinking based on existing similarities and things we know.

The importance of first principles is that it allows you to truly see underlying commonalities between seemingly disparate ideas and concepts. Things that on their face seem completely different, when boiled down to their basic elements, can suddenly seem connected by a common thread. That's a powerful thing.

Maybe it's what Albert Einstein was talking about when he said, "Everything should be made as simple as possible, but not simpler."

I'm not smart enough to truly know, but it seems like the Elizabeth Holmeses and Elon Musks (a First Principles proponent, by the by) of the world are ahead of the curve because they have both (1) the ability to see the commonalities between disparate ideas and concepts, and (2) the ability to see both the big picture and small picture at the same time and switch freely back-and-forth between the two.

In other words, they can see "the forest" and "the trees" at the same time. To put some meat on the bones of this analogy, let's make it a bit more literal. To start, let's take "seeing the trees," so imagine that you're traveling through dense jungle. You can't see more than a few feet in front of your face and to make any progress in your travels you have to hack your way through with a machete, breaking trail with every step.


You might be the best trail breaker in the world. People might come from far and wide to study your technique to learn how you swing the machete so powerfully, swiftly, and tirelessly. However, if you can't get vertical in your perspective, then your progress will always be limited by your vision.

On the other hand, let's take "seeing the forest," so imagine you are able to get above that dense canopy jungle and see the big picture. If you can get vertical, then your perspective will change and you'll have the ability to see where to go and how to avoid obstacles to make real progress in your travels. You'll be able to effectively navigate the terrain, but you also have to know how to break trail in order to make progress.


The best travelers will be able to simultaneously see the forest and the trees, to excel at the machete swinging AND the land navigation. Those are the geniuses, the people whose brains clock at speeds the rest of us can't fathom. The people who can hold these two differing perspectives in their brain at the same time.

So, how does all of this relate to baseball?

When I read Moneyball, one of the many things I took from the book was that player names are just proxies for the probability of obtaining a certain level of production. Fans love the personalities, style, and individuality of the player, but front offices are merely trying to tap into that player's production. So, when Billy Beane went to replace a "Jason Giambi," he didn't try to replace the player, he tried to replace the aggregate production. So, he broke Giambi down into his component parts and tried to rebuild that production over multiple roster spots. That philosophy changed the way I look at players and production.

Similarly, I now look at teams as largely the sum total of their organizational decisions. If you look at it that way, then the primary goal of any organization should be to improve its decision-making process; to increase the probability of making a "correct" choice on every possible decision.

You can engage with an idea on a number of different levels. If you engage with it on its fundamental level, then you are more likely to be able to consistently identify it in the future.

A baseball example of engaging an idea on different levels can be found in hitting ability. At what level do you want to engage the idea of hitting ability?

Let's take a quick look at this handy pyramid of levels, representing a simplified evolution of hitting evaluation, before we get into the discussion of these levels. 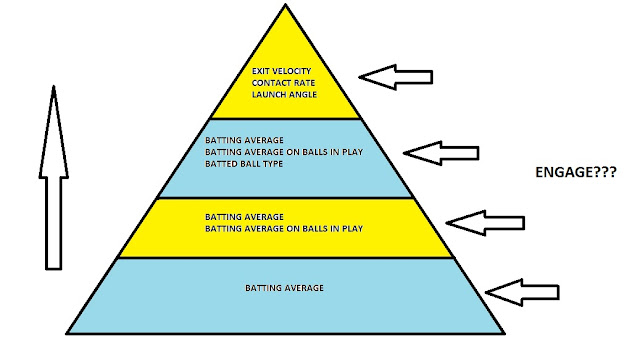 Henry Chadwick is credited with creating the box score and a variety of statistical measures. Chadwick felt that batting average was the best representation of a player's offensive skill and, for a lot of years, that view was reflected in the way teams were constructed and players were valued.

However, as we all now know, batting average is not the best representation of a hitter's ability, as it contains a great deal of fog that clouds a player's true performance level, including park effects, quality of opposing defenses, and random chance.

The next breakthrough in evaluating hitting ability came about when Voros McCracken discovered Defense Independent Pitching (DIPs) and the notion that a pitcher/hitter does not have true control over whether a ball in play results in a hit or an out. That discovery led to the use of Batting Average on Balls in Play (BABIP) to put batting average into context in an effort to strip out the "luck" component.

After that, the next step in the evolution of hitting evaluation came with the use of batted ball type, as certain types of batted balls were determined to be much more likely to result in a hit than others. So, batted ball type was added to BABIP in an effort to put batting average into even better context and eliminate a larger percentage of the fog surrounding true ability.

Currently, we have reached what may well be the fundamental components of hitting ability. Technology has enabled us to measure batted ball characteristics in ways that were previously unimaginable. At this point, we are beginning to measure hitting ability through (1) exit velocity, (2) contact rate, and (3) launch angle.

Given that hitting is largely a function of (1) how hard you hit the ball, (2) how often you hit the ball, and (3) the type of loft you get on the ball, we may have finally uncovered the fundamental truth of hitting ability and reached the top of the pyramid in the process.

The recent success of the Cubs under Theo Epstein and the Astros under Jeff Luhnow is revealing the only real "curse" in the game of baseball to be front office ineptitude. The fog generated by a lack of understanding of the fundamental truths of baseball has allowed narratives like "curses" to be introduced into the game. Those narratives are great for the fans, but they cloud the fundamental truths that should govern baseball operations. By harnessing the power of big data, both qualitative and quantitative, and converting it into an actionable form, organizations like the Cubs and Astros are riding stone cold rationality to a better understanding of "true" ability and player value.

Of course, there's also real irony to the fact that teams are employing complicated and convoluted statistical measures and data mining techniques in order to reduce baseball to its simplest, most fundamental truths.

If you want to know why front offices around the league are engaged in a race for brainpower, it's because the more intellectual horsepower in your front office, the more likely you are to uncover the fundamental truth of the components of baseball. And, if you uncover the fundamental truth before the opposition, then you have a real and exploitable competitive advantage.

In the end, the better your understanding of something's true nature, the more likely you are to value it correctly. Better understanding comes from getting vertical in your thinking.