All Under-Valued Team in Review

Well, time for the rubber to meet the road, so let's see how the all undervalued team panned out. Werth and Brian Wilson hit the biggest, while Harang, Barton, and Ensberg were the big disappointments. Unfortunately, injuries derailed Everett and Frandsen in 2008, and slowed Fernando Cabrera down early in the season.

I still have faith in everyone on this list, but I was expecting a bit more out of a few of these guys. Even so, Werth finally lived up to my expectations and Wilson demonstrated the kind of stuff that should make him a shutdown closer for years to come.

Anyway, here is how the guys fared in 2008 with links to preseason write ups.

2b) Kevin Frandsen - It was over before it began for Franny, as he blew out his achillies tendon and missed essential the entire season. He worked hard and the Giants rewarded him with a pinch hitting appearance in September. He saw three pitches and grounded out in that one at-bat. Unfortunately, Franny may have frittered away his best chance to claim a starting job at the MLB level.

It's odd just how often a player's career is aided or derailed by nothing more than timing. How many quality ballplayers missed their legitimate chance at an MLB career because they were blocked by a superior player? Jack Cust almost missed his window, because few teams recognized that he could be a quality MLB hitter. I have to wonder if that will be the case with Frandsen, as the Giants just signed Edgar Renteria to play short. That may make Emmanuel Burriss the front runner to play 2b and Frandsen the front runner to ride the pine.

Frandsen still has a Freddy Sanchez type skillset, a huge baseball IQ, and a tremendous work ethic. There is still a chance that he'll develop into a quality player, but he'll be 27 next year and the window of opportunity probably closed a bit on Frandsen's chances to be a starter at the MLB level. Still, the Giants love him and he does have skills, so 2009 could still be a breakthrough year for him. 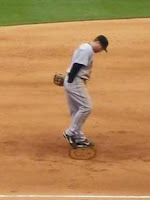 3b) Morgan Ensberg - Probably the most disappointing player on the list for me, as I really like Morgan. Even so, it's getting difficult to keep the faith on him. He'll be 33 in 2009, so he's still got time left in his career, but he needs to redevelop the swing and approach that made him so valuable in 2005.

It was clear that the Yankees were a poor fit for Ensberg, as he needs consistent playing time and unless your are an All-Star, you won't be a starter in the Bronx. Not surprisingly, he hit .203/.263/.243 and was soon out of the Yankees' plans.

I still think Ensberg offers an upside that includes a unique blend of batting average, power, and patience. In addition, he's a solid defensive third baseman. I still think he could be a player in line for a bounceback season and I'd be willing to give him a look if I were a GM. Ideally, he could get some consistent playing time at third base in a hitter friendly ballpark. Not many clubs fit that bill, but the Reds are one of them. Still, Morgan would have to earn a spot on the roster before he could even make a play for a starting job. I will continue to root for him and I still think he could get back on track. However, it's looking less and less likely that he will.

ss) Adam Everett - Like his double play partner Kevin Frandsen, Everett saw his season derailed by injuries. He signed with the Twins, but didn't play much as a shoulder injury made it difficult for him to throw. He just signed with the Tigers and will try to regain the health that enabled him to be the best defensive shortstop since Ozzie Smith.

The Tigers were undone last year by going for the sexy big names, regardless of how they fit in defensively. In 2009, they are going for top flight defensive players, even though they aren't much on offensive. I'll be hoping that both Inge and Everett can stay healthy, as they'll be epically good on defense. Still, offensive ineptitude and injury threaten to derail at least one of their seasons. 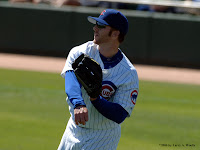 lf) Matt Murton - Murton continued an underwhelming streak of offensive performance. On his career, Murton is still at a respectable .288/.354/.438/.792, which may not seem respectable for a leftfielder, but when you add in his fantastic defense then the total package still seems undervalued. While his bat was disappointing in 2008, he defense was not.

In 2008, his combined Cubs/A's defensive performance in leftfield resulted in a 34.6 UZR/150 and a +3 over 123 innings. I still submit that given a fulltime starting job in leftfield, he could be the best defensive leftfielder in baseball.

Unfortunately, his bat lately hasn't lived up to his career line, which is about the floor of production that he'd need to justify a starting gig. Still, I love his glove and think his bat would play if he can maintain his career slash line. 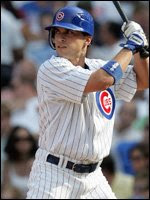 cf) Sam Fuld - Fuld was disappointing in 2008. However, I was surprised that he wasn't actually as bad as I remembered him being. In 2007, he posted a line of .287/.376/.395 between double-A and triple-A. Unfortunately, he lost out on the starting job with the Cubs out of spring training (though, he probably wasn't really given a shot), then cratered in 63 triple-A ABs. He then was demoted to double-A, where he posted a respectable .271/.366/.381.

I still think he could be the type of "free" minor league talent that could pay dividends to a team willing to roll the dice on him. He is rated as having the best plate discipline and being the best defensive outfielder in the Cubs system. Fuld is a favorite of mine from his college days, but I still hold out hope that he can be a sneaky good leadoff hitter and defensive centerfielder. Still, he'll need to take a step forward to catch the eye of an organization.

rf) Jayson Werth - After years of waiting for his massive skillset to emerge, it finally started happening in 2008. Werth possesses plus power, good speed, great defense, and tremendous baseball instincts. And, to top it all off, he's got tremendous on-base-skills. The most interesting thing about Werth is that he has not only the power and patience that you see in undervalued players like Jack Cust, but he also has tremendous defensive and basestealing skills. He's a very complete ballplayer, as evidenced by his 20/20 season. And, if he can prove that he can handle righties, then I wouldn't be surprised to see a 30/30 season out of him in 2009. That may be optimistic, but he's got the power and the speed to do just that. Still, it'll depend on his ability to hit the righties, which hasn't been his best attribute. Still, he had a great 2008 season.

Here's an article on just how valuable Werth was in 2008 and how valuable he could be in 2009 with more playing time.

sp) Aaron Harang - Harang suffered from the All-Undervalued Team curse, as he imploded after being used out of the bullpen in San Diego. He should rebound in 2009, but it's hard not to be disappointed and he certainly didn't prove that I was right about him being undervalued.

sp) Kevin Correia - Correia continues to be underwhelming, but I still like his chances. He's a prime example of a guy needing a change of scenery. He was bounced back and forth early in his career and between the rotation and bullpen later in his career. At this point, I think he needs to be put into the rotation and left alone. He's got good stuff and good movement, but he doesn't ever get a consistent chance. I still think he's undervalued and I'll be curious to see where he lands in 2009.

rp) Fernando Cabrera - Cabrera is back and healthy, which allowed him to demonstrate the type of stuff that got him on this list in the first place. In 2008, he posted a 9.8 K/9, but a concerning 5.4 BB/9. Even so, I think he's primed to take a step forward in 2009, as he's got dominant stuff.

cl) Brian Wilson - Wilson performed as well as I expected him, too. He racked up 41 saves with a 9.7 K/9. He needs to take his command up a tick, but he's primed to be a dominant reliever for a long time. He's got a filthy slider and the closer mentality that should help him get better in the future.
Posted by Lark11 at 10:05 PM