Well, time for my annual "picks to click" list. These are guys that strike me as being ready to take a step forward. Guys who are going to be better than their current valuation. It's easy to point to Albert Pujols and Roy Halladay and say that they're going to be studs in 2010. Barring injury, that's a virtual certainty. It's more fun and more valuable to focus on those under the radar guys who could step up in 2010. Guys who could be legitimate breakout candidates.

Well, I've written on Barton before, but this will likely be his last appearance on here. Either he breaks through in 2010 or not, regardless he'll either graduate from this list or fall off it entirely. So, be it from breakthrough or flop, this is it for Barton.

Still, I can't help but really like his chances for 2010. While it seems like he's been around forever, in actuality he is still only 24 years old. The reason I like Barton is that he has perhaps the best plate approach of anyone in baseball this side of Albert Pujols.

2. Barton makes contact at a 90% clip on pitches in the strikezone.

So, he rarely chases pitches outside the zone, he makes contact at a 90% clip on pitches in the zone, and when he does make contact he hits line drives 20% of the time. When you hit line drives at such a high rate, many of those balls in play will fall in for a hit.


In addition, Barton had Lasik surgery on his eyes this past offseason. If he does breakthrough in 2010, then people will likely point to that as a driving factor. However, through the miracle of modern technology, I watched basically every plate appearance Barton had over the final 5-6 weeks of the 2009 season. And, quite frankly, he looked good. He rarely chased a bad pitch, controlling the strikezone very effectively. When the pitchers worked him outside, he drove the ball with authority through the 5.5 hole on the infield. When he got a pitch on the inner half that he could handle, he did a nice job of dropping the head of the bat on the ball.

In September, Barton hit .310/.406/.488/.894 in 84 ABs. And, his performance could have been even more impressive, as he missed out on two additional homeruns by a grand total of about 4 feet. In a game against the Rangers in the Ballpark in Arlington, Barton hit a double off the top of the right-centerfield fence. If the ball was 2 feet higher, it would have been a homer instead of a double. Back home in Oakland for the next series, Barton was robbed of a homerun when Shin-Soo Choo jumped up against the rightfield fence to bring it back. Instead of 2 homers in September, he could easily have had 4 and maybe a bit more hype heading into the 2010 season.

Overall, I'm bullish on Barton for 2010. I think he's legitimately ready to pop. He controls the zone superbly and seems to have regained confidence in his swing. I'm not sure there is a better hitter in baseball at tilting the probability of success in an at bat in his favor. And, now he seems to have his refined his swing to enable him to better take advantage of those increased odds.

Rodriguez was acquired by the Tampa Bay Rays in the Scott Kazmir deal. He's flown under the radar a bit, but he's a very interesting prospect due in no small part to the thunder in his bat. He has a nice righthanded swing and serious pop. In 2008, he slugged .645 at triple-A and in 2009 he followed it up by slugging .608. Now, admittedly, some context is required, as he put up those numbers in a very friendly Salt Lake City ballpark. Still, even if you knock 100 points off his slugging percentage, Rodriguez is still doing impressive work. In addition to his power, Rodriguez also does a nice job of controlling the strikezone. He is a disciplined hitter who is more than willing to work the pitcher and draw a walk. For his minor league career, Rodriguez has a slash line of .281/.380/.501.

In addition, Rodriguez is a baseball lifer. His father, Johnny Rodriguez, bounced around various professional baseball levels for decades, raised him as a ballplayer as much as a son. One of the things that gives him so much value is his versatility. He has the skills to play just about any defensive position on the field and is more than willing to do so. Whatever it takes to help the team win, Rodriguez is willing to do.

Personally, I think Rodriguez should get a long look at the starting second base job with Zobrist shifting to rightfield. But, even if he doesn't win the 2b job, Ben Zobrist already blazed a trail in Tampa Bay to great effect for a super-utility type role, so the Rays are likely to be more comfortable using Rodriguez in that manner than other organizations. That may open up more playing time and more opportunities than he might receive in another organization.

Overall, Rodriguez strikes me as potential impact player in the making. He could be a 20 homer player with a .280+ batting average. And, he can hold down second base without difficulty. Whether he wins the 2b job or the Rays elect to use him as a super utility player, the Rays did very well in taking him off Anaheim's hands.

I'm surprised more people don't see the value in Dickerson. Even if he is never anything more than he was in 2009, he's still a plus defensive player in a premier defensive position who boasts elite on-base skills. That's a pretty rare combination, as finding a true leadoff hitter who can provide plus defense at an up the middle position is of great value. And yet, I do think there's a bit more projection left to his game.

In his MLB career, Dickerson has a slash line of .283/.383/.440 and a career line drive rate of 20.9%. Those are pretty impressive numbers, even if the slugging percentage is driven by his Ruthian performance during his 2008 cup of coffee.

I do think he has more power projection in his game than he showed in 2009. If he manages to crank even a few more homers in 2010, then he'll become a true impact talent. If I was a GM for a different organization, I would most definitely have tried to take Dickerson off Cincinnati's hands last offseason. Fortunately, he's still in the organization and the best should be yet to come.

Bowker is a guy I've seen more than a few times and every time I see him at the plate I just can't help but like him. Part of it exists on a gut level. I read John Sickels' Minor League Blog and he talks from time to time about subconscious pattern recognition, basically how, when he sees a prospect, he forms an opinion on some aspect of his skills without really knowing why. Basically, watching so much baseball over the years you start to subconsciously pick up on patterns and tendencies that you can't really explain. It's an attempt to explain away why we like certain players and not others, but one that may hold some merit. 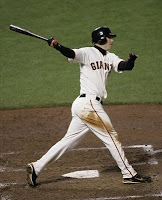 As for Bowker, he's got a unique swing. It's fairly short and compact, almost to the point where it makes him look like he's swinging with shorter arms, but is likely more the result of a somewhat abbreviated follow through. Despite the somewhat compact swing, Bowker still manages to generate substantial power. So, his swing path is quick to the ball, but the lack of length *should* make him a bit less susceptible to strikeouts. It's really an interesting combination.

To top it off, his swing generates line drives at a very good clip, as evidenced by Bowker regularly being up over 20% in his minor league days. So, his swing gives him a very good chance of popping the ball out of the park, but if it doesn't leave the park it still has a good chance of falling in for a hit. Overall, Bowker strikes me as being a good, well rounded hitter who needs an opportunity to show what he can do.

Another reason for optimism was his 2009 performance in the minors. For triple-A Fresno, Bowker posted a ridiculous slash line of .342/.451/.596/1.047. It certainly wasn't a sample size fluke, as he did it in 450 plate appearances, but the thing that really jumps out is his on base percentage. His OBP was over 100 points higher than his batting average, which is not the norm for Bowker. He's always been a good, intriguing hitter, but never an on-base maven. Still, it'll be interesting to see if he sustains it to any real degree. I suspect he was hitting the ball so well that pitchers worked him very carefully, issuing a lot of walks of the unintentional intentional variety. So, it remains to be seen whether his performance represents a breakthrough to a new level of discipline and controlling the zone. I am typically skeptical of the ability of players to make substantial improvement in plate discipline, as I tend to view it as a tool rather than an improvable skill.

Bowker's defensive skills relegate him to leftfield and first base, but his bat is rather intriguing and should be more than enough to carry him in an offense-first position. Unfortunately, the Giants brought in so many mediocre veterans that they may have blocked Bowker for 2010, which is unfortunate because he deserves a look. Even so, he's ripping the ball in spring training and on the verge of forcing his way into the Giants plans.

The Marlin defense did him no favors, but 2010 should be a breakout season for Nolasco. 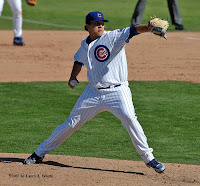 Gallagher has long been a favorite of mine. He features good velocity and life on his fastball and a plus curveball that is a real swing and miss pitch. During both his Chicago and Oakland days, Gallagher was plagued by a lack of opportunity and a lack of health. However, now that he has landed in San Diego, it could be the perfect situation for him. He now resides in the ultimate pitcher's park and should be completely healthy.

When healthy Gallagher strikes out roughly 7.5 per nine and walks roughly 3.5. He may not break camp as a member of the rotation, but may not be long for the bullpen as San Diego doesn't have many better options in the rotation. Early in his professional career, Gallagher failed to take advantage of his opportunities, but could be poised to do just that in 2010.
Posted by Lark11 at 11:51 PM