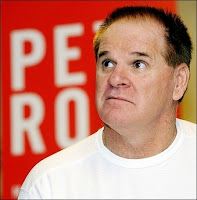 I don't usually discuss Pete Rose, because it has always been such a hot button issue for Reds fans. However, given the Reds struggles these days, there isn't much else to discuss right now, so let's toss some gasoline on the fire.

The bottom line is that I just do not have much respect for the man.

No one is perfect. I'm certainly not and I don't expect anyone else to be. But, I don't think it's too much to ask someone to be accountable for their mistakes and, if necessary, make amends.

Obviously, that isn't the way Rose chose to handle his mistake. Instead, he spent~15 years denying the allegations until he was "Red" in the face. He told anyone who would listen that he was innocent. He lied for over a decade and called into question the character and integrity of both Bart Giamatti and Fay Vincent.

The old Seinfeld joke is that sports fans root for clothes. If a player is on your team, then you love him. If he's traded, then you hate him. Basically, players are interchangeable. But, that's just not the way it's ever been for me. I've always liked players more than teams. When I was younger, I had teams that I loved. However, as I got older my interests narrowed and the Reds were the only team in which I really retained a passionate rooting interest. The Reds are the one team that has really remained "my team".

That's part of the reason why I get excited when "my team" (Reds) adds one of "my players" (i.e. Bellhorn). Not only do I think "my players" could help the Reds, but it also makes rooting for the Reds even more enjoyable for me.

I only mention it because it is that perspective that makes it hard for me to understand how fans can root for certain players. Personally, I cannot fathom how Giants fans can root for Barry Bonds. Not only is he an unrepentant cheater, but by all accounts he has treated almost everyone like dirt throughout his entire life. His arrogance has led to a belief that he should not have to play by the same rules as everyone else. Unfortunately, everyone has always been so in love with his abilities that they have consistently allowed him to play by his own rules. At this point, he has contempt for all and respect for none. How can you root for someone like that?

I must admit that I wonder the same thing, albeit for different reasons, about Pete Rose. How can people still actively root for someone like Rose? Just because he is (or, in this case, used to be) clothed in the colors of my team, certainly does not make him someone for whom I wish to root.

I certainly don't begrudge anyone their opinion and I do realize that this is likely a minority opinion among Reds fans. I know many fans look at Rose and see Charlie Hustle and a gritty style of play, but all I see is a man whose oversized ego found 15 years of telling falsehoods preferable to simply telling the truth and being accountable for his mistakes. I see a man who only admitted to his mistake when he came to realization that it was in his own self-interest to do so. Not to mention, his admission was made in a forum that enabled him to profit from it and was likely only made because the clock was running on his chances to get elected to the Hall of Fame.

If Pete Rose would have simply admitted his mistake and apologized when it happened, then not only would he still have my respect, but he would more than likely be in the Baseball Hall of Fame.