Kyle Lotzkar: Change the Mechanics, Save the Career?

The recent injury to Kyle Lotzkar, which thankfully turned out to be a hamstring injury rather than another arm injury, got me to thinking about the best way to minimize his injury risk going forward. Now, in the interests of full disclosure, I'm not a physiologist, kinesiologist, or biologist. When you add in the fact that there is still a measure of fog clouding the relationship between pitcher injuries and pitching mechanics and this post necessarily becomes equal parts speculation and educated guessing. With that out of the way, let's get back to Lotzkar.

Now, obviously, the 800 lb gorilla sitting in the room with Kyle Lotzkar is the high back elbow in his arm action. I've written about it in each and every one of my Kyle Lotzkar prospect profiles, as have many others in the blogosphere. And, unfortunately, Lotzkar has already suffered a significant arm injury early in his professional career. So, the issue becomes whether the Reds should consider tweaking Lotzkar's mechanics. Obviously, the goal would be to reduce the injury risk, but the downside is a potential decline in performance. It's not an easy decision for the Reds front office, so let's try to help them out.

Before we come to any conclusions, let's take a quick, cursory look at the problem. After breaking his hands, Lotzkar utilizes an arm swing that includes bringing his elbow above the the shoulder. When you use the high back elbow, it makes it very difficult to get the arm up into an over-the-top throwing position. To drop the elbow from the high position and bring the ball up into an over-the-top throwing position requires an almost lasso-type arm action. And, I think it's important to understand that it is this lasso-type arm action that is the real cause for concern and the real creator of heightened injury risk for pitchers.

Even just sitting at your computer, if you take a break from reading this to mimic the arm action, then you can feel the unnatural motion required to throw with the high back elbow and over-the-top arm slot. Throwing a baseball is unnatural enough as it is, but adding in this type of arm action makes it even more so. But, whenever a kid picks up a baseball for the first time he automatically throws it a certain way. And, the repetition of each throw over the course of his baseball development reinforces the muscle memory. Muscle memory is "a form of procedural memory that involves consolidating a specific motor task into memory through repetition, eventually allowing it to be performed without conscious effort."

So, if you naturally use a high back elbow, then you'll constantly reinforce it with each throw in your career. Not surprisingly, that's what makes attempting to change a pitcher's mechanics when they join an MLB organization so challenging, as you are working against years and years of muscle memory. For whatever reason, as difficult as it is to change the arm swing, anyone can pick up a baseball and throw without difficulty from an over-the-top, side-arm, or submarine arm slot. So, the release point is easily changeable, but the arm action up to that point is not.

As a result, I would avoid working against well over a decade of ingrained muscle memory by trying to alter the high back elbow. If the Reds forced him to do that, then they would risk a decline in performance to such an extent that he wouldn't be productive enough to pitch at the highest level. So, they *might* effectively reduce his injury risk, but end up with a healthier pitcher who simply isn't effective enough to maintain his prospect status.

However, I really think it's worthwhile to drop Lotzkar's arm slot. To me, that would seem to be the best way to manage the twin risks: injury and performance. The lower arm slot will eliminate the problematic lasso arm action, reducing the strain on the arm, but minimize the performance risk by not forcing him to completely retrain the muscle memory in his arm action.

However, two current pitchers do come to mind, one with a significant track record of durability and another with a limited track record but who strikes me as having a manageable injury risk. The former is Phillies pitcher Aaron Heilman and the latter is White Sox pitcher Chris Sale. But, what do they have in common?

Both pitchers undoubtedly feature the high back elbow that plagues Lotzkar, but also feature something that may help them avoid the injury risk typically associated with that arm action: namely, a lower arm slot.

Here's a look at their high back elbows and their respective arm slots: 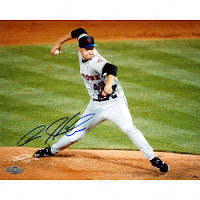 Since 2003, Heilman has thrown 65.0 or more innings 7 different times and 630.0 total innings. Additionally, he's thrown 437.2 minor league innings. And, despite all the innings, he has largely avoided significant arm injuries. He has the repertoire to start and spent most of his time in the minors in the starting rotation, but has spent most of his MLB career in the bullpen.

Obviously, Heilman is just one player and accordingly can't be definitive evidence of anything, but he is something of a rarity as a high-back elbow pitcher who has logged a significant number of innings without major arm problems. 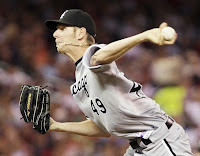 Sale is the pitcher I wanted the Reds to draft, which is surprising because I usually blanch at the mere sight of a high-elbow pitcher. But, with Sale, I just didn't see it as a red flag in part because of the lower arm slot, as that should offset some of the strain on the arm. Obviously, Sale is still young and in the early stages of his career, but so far the results are good and the injuries are non-existent. Of course, as with any pitcher, that could change on any given pitch, but so far the results are positive.

At this point, it's worth mentioning one of the alleged drawbacks of a lower arm slot. There is a school of thought out there, most visibly preached by Keith Law, that a lower arm slot frequently leads to struggles against opposite side hitters. And, to an extent, I agree with Law. Opposite side hitters get a longer look at the ball coming out of the pitcher's hand, so a pitcher will need to find a weapon to effectively nullify that advantage or else be relegated to a bullpen role. However, there are examples of lower arm slot pitchers who find success in the rotation, with Justin Masterson being the latest example. Still, it's definitely something that would need to be taken into account in dropping Lotzkar's arm slot.

One Final (and Perhaps Telling) Example

Now, I think discussing one more pitcher is instructive. Ordinarily, I would hesitate to cite this pitcher as an example of...well...just about anything, as he defies just about all the rules and is about as unorthodox as they come. Even so, for our present purposes, Dan Quisenberry is an interesting and relevant case study.

To  me, Quisenberry effectively drives home the point that it's not the high back elbow alone that is cause for concern in a pitcher's mechanics, but rather the lasso-type arm action that comes from the combination of the high back elbow and an over-the-top release point.

Here are three photos that tell the story better than I ever could. First, the obvious use of the high-back elbow: 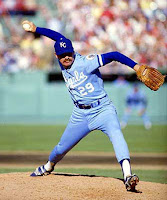 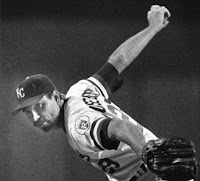 If you look at those photos, you can imagine the type of lasso action that he would have to use to get from this position to an over-the-top arm slot. Fortunately for his arm, he didn't have to use such an arm action.

In this third photo, you can see the lower arm slot that precludes the typical added stress on the arm that the lasso-action necessitates: 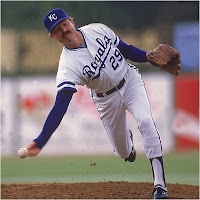 Personally, I'll go with the lower arm slot. There are no hard and fast rules with pitching mechanics and injury risk. Pitchers are have different physiologies and abilities to handle stress on the arm. But, I do think there is enough data out there to support the notion that the high-back elbow leads to heightened injury risk.

Given that Lotzkar is still in low-A and has a lot of development left before he reaches the majors, I don't think rolling with the status quo is the best option. If he was knocking on the door, then maybe it would make more sense to run him out there "as is" to try to get some years of production before injury (potentially) strikes. But, it seems like we are just waiting on the other shoe to drop on the injury front.

To me, the best option is the middle course. Lower the arm slot, reduce the injury risk, and work to combat any potential decrease in performance level. You have to wonder if Lotzkar's career can survive another significant arm injury, which would be a shame because he has a lot of talent and a seemingly strong work ethic. Fortunately, the injury isn't a certainty, but it would be a shame to see his career end before it begins.