Well, we are still in Phase 1 of the rebuilding process, which focuses on improving the revenue stream. However, we took a big step forward in Step 1, so this step will have dual purposes: increasing revenue and building the Reds brand.

One of the most positive trends to whip through Major League Baseball over the past 60 years is the increasing number of minority and foreign born players. The diversity is not just great for the game of baseball, but also for the business of baseball.

By and large, I'd like to see the Reds focus their international scouting efforts in Latin America, where the best values are typically found. However, oddly enough, this step focuses on the other end of international free agent spectrum: making a big splash with an elite Japanese prospect.

In the past, whenever someone has suggested that the Reds should pursue one of the big name Japanese free agents, I always oppose the ideas. Looking over the recent past, it frequently seems that the Japanese prospects fail to live up to the hype. From DiceK to Kosuke Fukudome to Kaz Matsui to Hideki Irabu, the production is frequently outweighed by the cost. 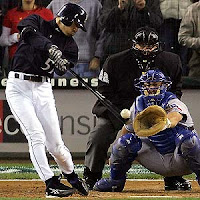 However, that was looking at things from purely a baseball standpoint. That was the old way of thinking, not the new Big Red Machine train of thought. Now, we are thinking big in order to rebuild this organization into something great. To quote Bull Durham: "Think classy, you'll be classy." The move I'm advocating here is much more of a business decision than a pure baseball decision. However, in the best case scenario, it would work out in both respects.

Now, sitting at home, I could scarcely fathom how it made sense for the Red Sox to spend the equivalent of the Kansas City, Tampa Bay, or Oakland payroll simply for the right to negotiate with DiceK. Of course, the answer is that it didn't. At least not from a purely baseball standpoint. As evidenced by his performance at the MLB level, DiceK was not worth the cost to acquire him. However, that deal had much less to do with performance than it did revenue. The purpose of the deal was for the Red Sox to build their brand by making inroads into the Asian market.

In 2001, Ichiro's first season with the Mariners, sales of Seattle Mariners' MLB-licensed merchandise increased 60% in Japan. In addition, the Mariners were able to negotiate a better local broadcast deal after signing Ichiro, as ratings increased for Mariner games.

In 2003, during Hideki Matsui's first season with the Yankees, international licensed merchandise sales went up 30%. And, of course, in 2007, DiceK's arrival created a 15% increase in international merchandise.

Also, MLB has been able negotiate agreements to broadcast games in Japan, which has brought in significant revenue.

Now, it should be mentioned up front, that there isn't much direct financial benefit to signing Japanese stars. The increased revenue, wherever collected worldwide, is distributed equally among the 30 teams. So, if the Red Sox sell a ton of DiceK jerseys, they still only get 1/30th of the revenue. International broadcast revenue is also divided equally.

However, that's not to say that signing a big name Japanese free agent is without financial value. While MLB teams cannot enter into their own licensing deals, they can contract for sponsorship deals. If you watch a Mariner, Yankee, or Red Sox game, often times you will see advertising for Japanese companies. These companies want to take advantage of the increased Japanese viewership of the team created by the new free agent.

In addition, the excitement generated by the new international free agent typically leads to increased ticket sales, as foreign tourists and hometown fans alike have an interest in seeing the new player. Also, the excitement could lead to better television ratings, which would allow the Reds to charge more for advertising on the team owned Regional Sports Network.

So, there is significant financial incentive to signing a big name Japanese free agent.

In addition to the financial benefits of signing a premier Japanese free agent, there are ancillary benefits to be reaped by the organization. Namely, building the brand.

Over the last decade, the Reds have sunk to new lows. In fact, they have sunk so low that they are in danger of sliding right past incompetence and hitting bottom at irrelevance. Over the past months and years, I've increasingly heard the Reds organization and players being disparaged and made the punchline of jokes. The Reds have lost a great deal of respect around Major League Baseball and have been relegated to also-ran status. In short, the Reds simply don't "move the needle" in the world of baseball.

The last time the Reds made a big splash was when they acquired Josh Hamilton in the Rule V draft. The Reds were the toast of the town when Hamilton turned his life around and flashed the potential that made him the #1 overall pick in the draft. That's the only time in recent memory the Reds were discussed in positive, borderline glowing, terms around baseball. It's time for them to do it again.

By signing an elite Japanese free agent, the Reds would be announcing to not just baseball, but to the world, that they are an organization with which to be reckoned. That they are serious about building the organization into a first class winner.

Well, it just so happens that there is an elite Japanese free agent on the horizon. Young, fireballing righthanded pitcher Yu Darvish has been on the radar for the past couple of seasons and he is likely the next big import from Japan. Darvish throws from a three-quarter arm slot and is reported to feature a 93-97 mph fastball with a nasty slider. Like many Japanese pitchers, he also features a wide array of offspeed offerings. He is already coveted by many teams in the game, but there's no reason why the Reds cannot compete for his services.

It remains to be seen when, or if, Darvish will head to the States to play pro-ball, but the odds are good that it will happen in the near future. When it does, the Reds could make a bold statement by beating the competition to the punch and acquiring his services. There has been some question of whether Darvish would have to go through the posting system, but it might be advantageous (though expensive) for the Reds if he did. After all, the negotiating rights that go to the highest bidder are exclusive, so Darvish would have to sign with the team that won his rights or not at all.

By making a big splash with a signing of Yu Darvish, the Reds would be increasing their revenue and refurbishing the image of the entire organization. The Reds logo would become a popular and recognizable symbol in Japan and the team's games would be watched by Darvish's fans back in Japan.

It's also the type of bold action that could "move the needle" and make the Reds relevant once again in the United States. The national media would be forced to sit up and take notice. Not to mention, ESPN might actually televise a Reds game again. The Reds would again be discussed in a positive manner around Major League Baseball.

This is also the type of move that would improve the image of the organization in the eyes of players around the league, which would make attracting free agents easier and would allow the Reds to attract talent without having to overpay for it. Darvish could be a "loss leader" of sorts, which could lead to an improved product on the field.

In short, this is the type of move that the Reds need. And, the increased revenue generated by the Regional Sports Network could give the Reds the financial resources to get just such a move done.