Ok, the Reds season has gone down the tubes, so it's time to revisit our old friend Adam Dunn. During his time in Cincinnati, The Big Donkey was the biggest lightning rod in all of baseball for the simple reason that he personified the divide between traditional scouting and statistical analysis views of the game. Traditional scouting types hated him, statistical analysis fans loved him.

And, one of the first things I posted on this blog was a blurb about the likelihood that Adam Dunn would suffer an early decline. Dunn's game has always been predicated on the old-player skills of power and patience. And, Bill James first postulated that old-player skills were more susceptible to aging than the young-player skills of speed and batting average. The theory being that the loss of a step or the slowing of the bat would cause a player lacking young-player skills to fall off the cliff. For example, which player is better suited to survive a slowing bat and the loss of a step, Adam Dunn or Ichiro? Dunn is at the bottom of the acceptable spectrum in both outfield range and contact rate, while Ichiro is at the top. So, a slowing bat or loss of a step could be devastating for Dunn's production, while easily manageable for Ichiro. Anyway, I bought into that philosophy, which was a big reason why I was opposed to locking Dunn into a multi-year extension that would take him well into his 30s.

Now, that said, this year has been an utter nightmare for Adam Dunn. It's been so bad that it almost defies description. I still buy into the old player skills argument, but it's difficult to imagine the wheels completely and utterly coming off the wagon like this. Is it possible? Sure, in fact the old player argument expects an earlier and faster decline, but I would have thought he would have gone from ultra productive to mediocre to massive struggles. Instead, he skipped the intermediate step and went right to the massive struggles. Regardless, I'm going to take a swing at helping the Donkey out. Once a Red, always a Red.

There are countless possible reasons for Dunn's struggles. The change in leagues and resulting unfamiliarity with the pitchers, the change from playing in the field to being largely a DH, potential injuries, the weight of the contract and the corresponding expectations. It could be one or all of those factors. The more potential variables that exist, the harder it is to pinpoint the specific cause of the struggles.

But, to me, the first thing that I see is a subtle change in his swing mechanics.

Below are two At Bats against one of the toughest pitchers in all of baseball: Justin Verlander. The games are 11 days apart in 2011, but Dunn does the same exact thing in each of them. It looks to me like Dunn has simply fallen into a bad habit in his swing. It's easy to do and occasionally difficult to both identify and fix. But, Dunn utilizes a much more extreme bat waggle/hand position with the ChiSox than he did during his time in Cincinnati and Arizona.

If you watch this video (I suggest pausing it at the 2 second mark and again at the 26 second mark), look at how long it takes Adam Dunn to get his bat up into hitting position. He lays the bat on his shoulder, actually past horizontal and somewhat pointing to the ground. And, he maintains that position for a LONG time. In fact, Justin Verlander gets past the apex of his leg kick before Dunn begins to bring the bat up into a more vertical position. Verlander is probably the hardest throwing starting pitcher in baseball, but Dunn waits until Verlander is unpacking his leg kick and beginning to drive to the plate before bringing his bat up.

If you are slow to get the bat up into hitting position, then you are going to be slow to the ball. And, against MLB pitching, you can't afford to be even a fraction of a second late. In this instance, Dunn makes it work (in part because he gets an 89 mph offspeed pitch), but I really don't think that bat position is a recipe for success.


And, below, here's another At Bat against Verlander, this time almost 2 weeks later, but the same bat waggle and delay in getting into hitting position. This time, Verlander gets the better of him. Stop the video at the 32 second mark and look at how far into the windup Verlander has gotten compared to the bat position of Dunn. How can Verlander be unpacking the leg kick and Dunn still have the bat parallel to the ground??? How can you hit like that??? Being slow to get the bat up into proper hitting position will very likely make him slow to the ball, but it also likely means that he is now moving his hands into hitting position at the very same time he is moving other parts of his body to trigger the swing. At times, it almost seems as if the barrel of the bat is still moving up and in towards the plate when the body begins moving forward to meet the pitch. The simultaneously moving parts to his swing could also help explain his struggles.

Now, let's take a look at a few of Dunn's At Bats while he was with the Reds.

First, here's a battle with one of the best starting pitchers in baseball, C.C. Sabathia. Look at Dunn's bat position against C.C. You can see that he doesn't rest the bat on his shoulder and he never gets past parallel. Also, he brings the bat up to a vertical hitting position before Sabathia begins to unpack his leg kick. So, he's a hair quicker in making his move to bring the bat up into hitting position and he has a shorter distance to travel to get into that position.

(For whatever reason, MLB.com isn't properly embedding the older Reds video clips, but if you click on the black box it'll open up the videos in a new window)


And, finally, here's a look at Dunn against Wandy Rodriguez. If I was Dunn, I'd use this video as an example of what my swing mechanics should be. The bat position is much higher and only occasionally is it horizontal to the ground. And, when Wandy is at the apex of his leg kick, you can see Dunn's bat is in ideal position. In this At Bat, he hasn't rested his hands on his shoulder and is never past parallel or pointing the bat at the ground. To me, this hand position makes him significantly quicker to the ball and puts him in better position to drive the ball.


Maybe Dunn has succumbed to the curse of Old Player Skills and an early career decline. Maybe he was right all these years when he told everyone that he didn't want to play 1b or be a DH, but rather was a leftfielder. Maybe he's just scuffling with the change in leagues. 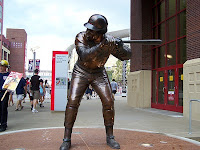 But, if there was one thing I'd like to see Adam Dunn do over the final month-and-a-half it would be to stop resting the bat on the shoulder and pointing the barrel at the ground. Dunn isn't Rod Carew. He's not a handsy singles hitter who is going to slap and slash singles to all fields. Carew could afford to hit with a horizontal bat wrapped around his body. Dunn is a power hitter and needs to take a big swing to get his money's worth.

It's possible that Dunn has lost a bit of bat speed, but at the very least he hasn't gotten any faster. And, as he gets older, he should be trying to get quicker and use a more direct path to the ball, but instead Dunn has gone the other way. He has dropped his hand position, forcing him to travel farther to get into proper hitting position and meet the ball. Dunn needs to go back to the hitting position he used in the Wandy Rodriguez and CC Sabathia At Bats. Stop holding the bat horizontal to the ground and get it up into hitting position earlier. When a pitcher is running it up there at 95+, you simply can't wait to get your hands into hitting position until after the apex of the leg kick: that's just too late. Get quicker to the ball. Maybe that will get him back on track this year and it will certainly become more important as he ages and loses a bit of bat speed, as he doesn't have all that much margin for error at the plate.

This change might be part or all of what's ailing Adam Dunn. At the very least, if he went back to what worked in Cincinnati and Arizona, then he could cross the new hand position off the list of potential explanations for his struggles. Whatever the reason, the baseball world is just a bit more enjoyable when the Big Donkey is launching the ball into the stratosphere, so let's hope he gets back to doing just that...and soon.