Over the years, I have gained a greater appreciation for motor sports. In the ability of drivers to push their cars to the limit, where peak performance and peak danger coexist. To drive right on, but not tip over, the edge. To maximize speed without the loss of control.

I remember watching a Formula 1 race back in the heyday of Michael Schumacher and team Ferrari. Schumacher was leading the race, but still had to make an additional pit stop that the cars trying to run him down didn't need to make. His team, which knew that the pit stop would take roughly 10 seconds, got on the radio and informed Schumacher that he needed to post a specific lap time over each of the next 20 laps in order to win. In essence, he needed to improve his lap times by roughly half a second over the next 20 laps in order to build up a 10 second buffer to ensure that when he exited his the pits he would still be ahead of the teams behind him. Anything less would see him reenter the race track outside of the lead, looking at tail-lights with little chance of passing to win the race. The team calculated the lap times needed to win and Schumacher delivered those lap times, exiting pit lane just ahead of the cars that were trying to run him down. He needed more speed and knew just how to wring it out of the car. The ability to just "go faster" when needed, to outperform teams who spent hundreds of millions of dollars to best him, was a testament to the car developed by Team Ferrari, but also to the pure skill that enabled Michael Schumacher to drive at the absolute limit of the car's capabilities.

One of the main keys to driving a race car at the limit is controlling those forces (resulting from braking, accelerating, and cornering) that act on the car. Basically, controlling the balance of the car. When a car is balanced, you maximize the tires' traction. The more traction the car has, the more control the driver will have and the faster the car will travel around the track. If you don't push hard to the limit, then you'll be slow and noncompetitive. If you push too hard and exceed the limit, then you'll be slow and noncompetitive because the tires will break away, losing grip, and start to slide. You can be uncompetitive by not generating enough power and you can be uncompetitive by generating too much power and exceeding your ability to control the car. In short, you can generate all the power you want from the car, but it will be ineffective in improving racing performance without the ability to balance the car. If you can't balance the forces acting on the car, then you will struggle to maximize performance.

A hitter can fail to maximize performance by not pushing hard enough, not generating enough power. Perfect balance of minimal power doesn't maximize performance. (An example of this might be David Dahl, who I rated third on my last draft write-up wish list, but one potential red-flag was that he seemed to be largely an upper-body hitter. He had perfect balance, but limited force to his swing). A hitter can also fail to maximize performance by failing to balance the forces generated by the swing, basically exceeding the limit. Too much power, not enough control. (An example would be a hitter who takes a big cut, but is out of balance or, in the extreme, falls down during his swing).

The power in a hitter's swing is generated substantially from the core, not the hands, wrists, or forearms. More specifically, the rotation of the hips is what powers the swing. Once the plant foot lands, the hips rotate rather than slide forward. The mental image is that a hitter standing in a barrel wouldn't touch the sides of the barrel with his hips during his swing. In order to generate power through hip rotation, the hitter has to effectively cock the hips via the stride. To properly fire the hips, the hitter needs a proper foundation. That foundation requires a firm front leg, which Albert Pujols ably demonstrates here: 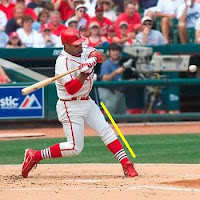 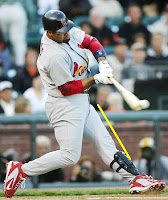 The hitter cocks his hips to build up potential energy, but to properly and efficiently unleash it requires a firm front leg. If the front leg isn't firmly planted, then the swing is inefficient and the power generated bleeds out of the swing instead of being transferred to the baseball.

All of these thoughts were in my head when I undertook to answer a question that has been bothering me:

Ackley seemed a pure hitter with very little development risk when he was drafted out of North Carolina. He had bat speed, hand-eye coordination, pitch recognition, the ability to barrel the ball, solid power potential, and a good grasp of the strike zone. It was almost inconceivable that he wouldn't hit. And yet, to date, he really hasn't.

This offseason, I've been reevaluating hitters and hitting mechanics to better understand what makes a good hitter. So, answering the Ackley question was a natural extension of this process. It didn't take long for a possible explanation for Ackley's struggles to emerge.

If you look at the following photos, the aspect of the swing that catches my eye is the front leg. 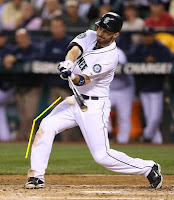 Unlike Albert Pujols, Ackley does NOT consistently hit against a stiff front leg. The severe flex in his front knee is fairly surprising, as it not only seems wholly unnatural, but it may also be indicative of a number of problems. As was mentioned above, potential power bleeds out of the swing when the hitter does not utilize a firm front leg. Ackley's position in the above photos significantly limits hip rotation and may lead to the hips sliding forward to compensate for the lack of rotation. It's simply not possible to fire the hips from this type of foundation. Further, hitting in this position may lead to the eye-level dropping, creating difficulties in tracking the pitch. Overall, it's simply not a proper foundation for hitting.

While this flaw jumps off the screen, it's not one from which Ackley suffers all the time. He does show flashes of a stronger, more efficient foundation. Here's a look at Ackley doing it right. If you watch his front leg, it straightens out, rather than his knee getting almost outside his front foot. This allows his hips to rotate properly and efficiently unleash the power he has generated.


To me, the above video reveals a much stronger set of hitting mechanics. At the 00:36 second mark, you can see a stronger foundation, which permits both better generation of force and better balance of those forces. So, he certainly is capable of this type of swing.

However, while Ackley clearly doesn't suffer from the flaw all the time, he does frequently fall into the bad habit of not hitting with a stiff front leg. The following video, despite resulting in a double, is a prime example of this flaw in his swing:


At the 00:29 second mark, there is a great view of Ackley's swing. You can see him hitting against a flexed front knee, though he still manages to drop the head of the bat on the low pitch and muscle it into the right-center gap with his arms and upper body. At the 00:35 second mark, there is a great super slo-mo view of his hip rotation. There is a point where you can see the hips stop rotating and his swing become upper body driven. In fact, at the moment he makes contact, you can actually see his hips actually reverse-rotate back towards home plate. So, as his shoulders continue to rotate clockwise, his hips actually start to rotate counter-clockwise against his shoulder rotation. While, in this instance, the final outcome is good, the process is bad. And, relying on a flawed process to produce good results is a recipe for inconsistency and failure.

It remains unclear exactly when and why Ackley falls into this habit. At first I thought it was his way of handling low pitches, but if you look at the Ackley photos above, those aren't exactly down in the zone. So, that's not it. Next, I thought it might happen on offspeed pitches where he's fooled and trying to slow down his swing to keep the bat in the zone longer, however the following video reveals that not to be the case:


Facing Franklin Morales, Ackley's swing falters as his front leg badly breaks down, but this happens against a straight 94-mph fastball. So, it's not a swing flaw brought about by being fooled by an offspeed pitch. There's a great view of the swing flaw starting at the 00:25 second mark. You can see how the flaw leaves him with an arm and upper body swing, as the front leg position limits hip rotation, causing instead the hips to slide forward. The flaw saps the swing of substantial power. If I was the hitting coach of the Mariners, then this is the first change I would make to Dustin Ackley. He needs to firm up his front leg and avoid breaking down. The flaw creates massive inefficiency in the swing and saps his ability to drive the ball consistently.

Hitting is both creating power and balancing the forces that generate that power. Dustin Ackley's flexed front knee leaves him unable to properly balance those forces. As a result, his swing is inefficient and bleeds potential power. It's possible that this flaw has already been pointed out to Ackley, as sometimes correcting a flaw is far more difficult than identifying it, but if I was the Mariner hitting coach this is where I would want Ackley to expend his energies. He has far too much natural ability to not be an impact hitter at the MLB level.

In reflecting on hitting, I think it really IS the hardest thing in sports to do well. It's also one of the most difficult to properly evaluate. What makes a good hitter? It's harder to identify than I previously thought. It involves both swing mechanics and reactive abilities. As for the former, it shares similarities with other sports, particularly properly balancing the forces you generate to ensure efficiency and peak performance.
Posted by Lark11 at 4:22 PM