One of the obvious trends that has emerged in baseball over the past few years is organizations valuing prospects more and more. The main reason is just how cost effective it can be. As free agent salaries continue to escalate, the low cost of homegrown talent in the first six years of their careers becomes more and more valuable. In addition, the low cost of young talent makes it easier to replace them if they get injured. If you are relying on a $15M player and he gets hurt, then there is less flexibility to replace him. On the other hand, if you are relying on a young player who is making less money, then he is easier to replace because of the original cost savings.

Obviously, there are benefits to young talent, however it bears mentioning that young talent is high risk and often times simply doesn't pan out. So, there are times when trading away prospects is a good idea, especially when it becomes so valued around baseball that it risks becoming overvalued. You have to follow the value, whether that means keeping prospects or trading them away. 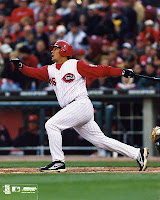 Below is a spreadsheet that examines the Reds performance in the draft since 1985, which was the year Marge Schott took over and Barry Larkin was drafted. I only included up to 2004, as the draft classes after that still include prospects who can make the show. The 2004 class could still have a few prospects who will make the show, but 2004 seemed a good cutoff date.

Also, I highlighted from 1985 through 1998 because that was the Marge Schott era and I wanted to see how her scorched earth policy in regard to scouting and player development impacted the Reds drafts. It's difficult to draw any significant conclusions from the data, but obviously the Reds have had very little success in acquiring impact talent in the draft during this period and have had some stunningly bad drafts in general.

It's difficult to imagine a worse draft in history than the 2001 draft, as the Reds didn't have a single player make the majors. Jeremy Sowers made it, but he never signed with the Reds and made the majors with the Indians. The 2000 draft class was almost as bad and 2002 would be a disaster if not for the emergence of Joey Votto.

Even in the best years, the Reds only had a handful of players make the majors. And, the true impact players only come along once every few years...at best. So, while it's great to develop homegrown talent, it's also important to keep the high flame-out risk rooted firmly in mind. Not every player in the system is destined for greatness and sometimes it makes sense to use them to acquire the veteran talent.

Ultimately, the purpose of an organization's farm system is to support the MLB team. However, there are different ways for an organization to make the best use of the farm system. A good contrast of styles is the Oakland A's and the SF Giants. Over the years, the A's have typically focused on developing homegrown talent, while the Giants have frequently traded away young prospects for established veteran talent. While the philosophies differ, each has resulted in a great deal of success for the organizations at the MLB level.

Fortunately, the Reds have made some strides in improving the farm system, which is a must for the success of the small to mid market team. Homegrown talent is vital to MLB success, but that talent can be utilized in a variety of ways.
Posted by Lark11 at 10:41 PM