Homer Bailey is extraordinary. He's an enigma wrapped in a riddle.

First, why would a pitcher voluntarily adopt the nickname "Homer"? Maybe it's high time he makes the switch back to David. Second, I'm not sure anyone in baseball gets less with more than he does.

While his problems seem somewhat clear, it's still mindboggling that he has as little success as he does. 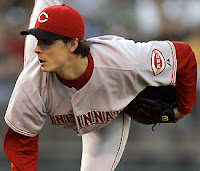 Given his less than impressive 4.65 BB/9 mark on the season, it's easy to see that control is not a strength. Still, I'm not sure that stat quite illustrates the problem. As problematic as his control has been, it pales in comparison to his command.

Obviously, Homer is plagued by both.

Homer REALLY struggles to hit his spots inside the strikezone. That may even be too kind. In fact, I'm surprised Ryan Hanigan doesn't strain his arm with the amount of reaching he does to catch Homer's pitches. Hanigan is always reaching a LONG distance to corral Homer's pitches. It's not exactly a rare occasion to see Hanigan set up on one corner only to have to reach all the across the plate to the other corner to catch the ball.

How rough is his command? Well, homeplate is 17 inches wide. So, when Hanigan is reaching from corner to corner, he's reaching a foot-and-a-half or more. Great pitchers miss their spot by only a couple of inches either way. Homer misses by a foot or two. Suffice it to say, it's difficult to be effective with that type of command.

Many of the pitches that Homer throws are a complete waste. They are so far off the plate that they are easy pitches to take for the batter. As soon as the ball leaves Homer's hand, the hitter knows it's off the plate and he can take it. Not only are those pitches worthless in and of themselves, but they also fail to do anything to setup the next pitch. They are so far off of what Homer is trying to do that they prevent Homer from effectively sequencing his pitches.

As the saying goes, "Hitting is timing and pitching is upsetting that timing." It becomes much more difficult to upset that timing when you can't setup your pitches.

How bad is it? Well, he actually walked Bengie Molina twice in the same game last week. That's bad. Really bad. And, frankly, not easy to do.

The other problems that leaps out at me on Homer is that his offspeed pitches simply aren't consistent or effective. All to often his once hyped power curve rolls and hangs. The vaunted splitter is used too infrequently and doesn't always have the nasty bite that it needs.

Still, it's not all doom and gloom. 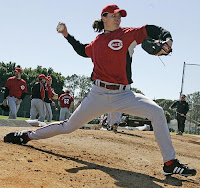 There are a number of positives that actually give me reason for optimism. In fact, I'm more hopeful about Homer than I have been in quite some time.

In the past, Bailey didn't demonstrate the type of electricity you expect to see in elite pitching prospects. In 2009, he has flashed it a bit.

Another positive that really jumps out at me is the changes in his mechanics. There were reports that he was refining his mechanics in the minors and I really like the results. Homer has eliminated the stabbing motion from his arm swing.

Before the change, Homer would stab at the ground with his pitching hand after breaking his hands. Now, Homer has a much more fluid and fundamentally sound arm swing. After breaking his hands, he uses a fluid half-circle arm action. He breaks his hands and swings his arm down from above his left thigh, past his right hip, and then up into the throwing position.

And, of course, he still has the free-and-easy arm action. He has a loose and easy throwing motion, which makes it look like he's not a max effort type pitcher.

Finally, and most importantly, he's still a light-switch guy. He has the type of upside that could make him really special once he figures it out. Unfortunately, he hasn't done it yet, but it could still happen at any time. At this point, he is clearly struggling with his arm slot, but perhaps that is not unexpected given the overhaul of his mechanics. It's not easy to make changes to the throwing motion you've used your entire life, so maybe he just needs more time to get comfortable and find a consistent arm slot. If he can do that, then he could start to unlock his true potential.

At this point, the best hope for the Reds is that Homer Bailey is the next Edwin Jackson. Some guys simply take longer to figure it all out and put it altogether. Jackson was a very highly regarded pitching prospect in the Dodger organization, but didn't put it together until this year in his age 25 season. Edwin was similar to Homer. Big time power stuff, but no ability to command it. Hopefully, Bailey can follow in Edwin's footsteps, but do it before he changes organizations twice.