Well, first pitch is just around the corner, so I'll keep this short and sweet.

First impression of the match-up against the Phillies: ugh. Obviously, the Phils are cream of the NL crop, so any of the other options would have been preferable. Given that the Giants finished at 92-70, while the Reds finished at 91-71, you could argue that the Reds decision to rest the entire starting lineup against a very weak Astro team was shortsighted. Featuring a triple-A caliber lineup, the Reds couldn't push across a single run against the Astros, ultimately losing 2-0. Still, the Reds managed to go 4-2 in the final week, so it's tough to be TOO critical. Still, it would have been nice to push past the Giants to earn the right to face the Braves, instead of the Phillies. But, we now have to play the hand we've been dealt. Unfortunately, the Phillies are currently holding 3 aces, which complicates things for the Redlegs. 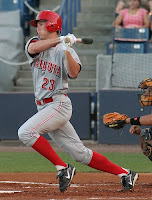 Roy Halladay, Roy Oswalt, and Cole Hamels loom large, especially in such a short series. The Phils won't have to use a 4th starter, so the Reds will see nothing but this elite troika. Obviously, a big key to the series will be the Reds ability to get into the Phillies bullpen. While the high leverage relievers, Brad Lidge and Ryan Madson have been good this year, the bullpen is obviously the soft underbelly of the Phillies. This is especially true of the middle relievers. However, to get to the bullpen, the Reds have to either drive the troika from the mound or grind away ABs until their pitch count gets too high.

Unfortunately, the Reds simply don't have the type of relentless, grinding type hitters to force these pitchers to really work. I've long been a fan of late-count hitters and this is a prime example of where disciplined, patient hitters are invaluable. Given their inability to really grind ABs, the Reds lineup will likely have to scratch out some runs against the Philly starters, especially a strike-thrower like Halladay.

For me, the key player for the Reds in Game 1 will be Drew Stubbs. Joey Votto and Jay Bruce have had successful seasons and are big keys to the Reds production against righthander Roy Halladay. However, the Reds will need some production from their complimentary players and Stubbs seems a likely candidate. Stubbs hit a robust .311/.406/.578 in September, so he's bring a white hot bat to Philly. Additionally, Stubbs has the type of secondary skills that could loom large in a low scoring battle.

Stubbs has game changing speed and defensive abilities, which could pay huge dividends in high leverage situations for the Reds. Whether it's stealing a key base to get into scoring position or cutting off a ball in the gap to prevent extra bases, Stubbs could be a real asset in a game where a single play could make the difference.

A player who could play a huge role in this entire series is Aroldis Chapman, as the Phillies are a somewhat lefthanded heavy lineup, so having a 105 mph southpaw coming out of the pen could be a big deciding factor. The last time the Reds won a World Series it was on the back of the Nasty Boys, hopeful they can rekindle some of that nastiness with the presence of Chapman. If Chapman can find the strikezone, then he may be able to shutdown down the big swinging Phils in high leverage situations.

If the Reds starting pitchers can keep the games close (admittedly, a fairly large if), then the performances of Chapman and Stubbs in high leverage situations may be the key to the Reds' chances for success in this series.

Anyway, first pitch is just about here, so time to get settled in.