Juan Francisco has power that stacks up favorable with almost any prospect in the game. A select number could certainly out-power him, including recent #1 overall pick Bryce Harper, but Francisco can really lay the lumber when he gets a hold of one. Of course, his struggle to make consistent contact means that it doesn't happen as often as we would like.

Additionally, Francisco's offensive game lacks secondary skills (i.e. speed, on-base skills, etc), so his game will be driven largely by his power production. Fortunately, his home park accentuates his strongest attribute, so if he can stick in the majors for an appreciable amount of time, then he might be able to make some noise. Of course, while the power would be nice, his lack of both defensive ability and on-base skill will always serve as significant drags on his overall value as a player. 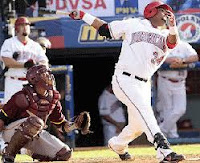 His season was hampered by an appendectomy, which cost him roughly two-months of the season. Despite this bump in the road, Francisco managed to log 59 PAs at the MLB level. In those plate appearances, he hit .273/.322/.382 with 1 homerun and a 20/4 K/BB ratio. His BABIP was an unsustainable .412, which was mildly alarming when paired with his lackluster 14% line-drive rate. In short, his batting average, which was the only acceptable part of his slash line, was driven largely by luck.
On the plus side, Francisco did show some capacity to work counts. As an aggressive hitter, you don't expect to see him in many 4+ pitch At Bats. Nevertheless, Francisco worked the count to 3-0 in 7% of his plate appearances, which is quite strong when compared to the league average mark of 5%. Obviously, it's a small sample size and the deeper counts still didn't translate into walks, so the ability to work counts may not have much tangible value and may not even be sustainable. Still, it's mildly interesting and certainly worth of note. However, his contact rate in two MLB seasons remains a disturbing 65%, which falls substantially below the MLB average of 79% over those two seasons. In fact, Francisco's contact rate falls well below Adam Dunn's career 71% contact rate, which is obviously cause for concern. The lower the contact rate, the higher the strikeout totals and the lower the batting average. Adam Dunn's contact rate has always hovered around the lowest acceptable rate for a productive hitter, so Francisco's inability to surpass Dunn's mark is disconcerting. Additionally, Dunn manages to offset his struggles to make contact by drawing a massive amount of walks, which Francisco simply does not do.
Swing Mechanics and Offensive Profile
Francisco has an unorthodox pre-pitch setup. He uses a wide-spread, open stance and a significant bat waggle. He stands tall and holds his hands up next to his left ear. While waiting on the pitcher, Francisco moves his bat in a circle and also from vertical to down past parallel to the ground. He has a very loose, active pre-pitch stance. 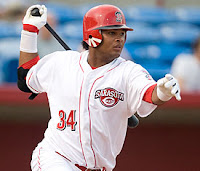 Francisco relies on a two-step stride to generate load and transfer his weight to meet the oncoming pitch. His first stride moves his foot in towards homeplate to close up his stance and cock his hips. A wide-open stance prevents a hitter from utilizing the hips to generate power, as you can't fire the hips if you are already in an open position. So, open-stance hitters who want to generate power need to develop a mechanism to cock the hips and generate load for the swing. The interesting aspect of Francisco's stride is that once his first step closes up his hips, he taps his toe and then immediately opens up again. The second step in his stride is a move to open right back up to the pitch again.
In short, he closes up his stance by striding towards the plate, then taps his toe and immediately opens his stance up again. In fact, if you look carefully, when his stride foot lands Francisco completely opens up his foot by pointing his toe directly at the pitcher. He isn't rolling over on the foot when he fires the swing like some hitters, but rather opens up before he fires the swing.
Given his light-tower power, it's undeniable that his stride effectively cocks his hips and allows him to generate substantial power. But, his open stride and early firing of the hips makes me question his ability to cover the outer-half and handle offspeed pitches that upset his timing.
As for his swing, he drops his hands into proper hitting position and gets a very strong bat-throw through the zone. He generates good bat speed and does a nice job of squaring the bat on the ball. He still has length in his swing, which explains his difficulties in making consistent contact. He uses a slight uppercut in his swing, which generates good loft on the ball.
After whipping the bat through the zone, Francisco uses an abbreviated follow-through during which he never really releases the bat, rather cuts it short a la Fred McGriff.

A couple of years ago I thought the most comparable MLB player to Juan Francisco was Mike Jacobs. Basically, a defensively challenged player relegated to the low end of the defensive spectrum who possesses good pop but very little on-base ability. And, even now after Jacobs has really started to slip, it still feels about right. Francisco probably hits for a higher average than Jacobs, but flashes even less on-base ability.
If Francisco manages to stick at the hot corner, then his best comparisons are probably Kevin Kouzmanoff or Pablo Sandoval. Both have an early-count, low-walk approach, but Kouzmanoff is the superior defensive player while Sandoval is the more pure hitter. There really is no perfect comp for Francisco, because he strikes out like a late-count hitter but walks like an early-count hitter. It's an unusual combination and one that really drags down his value. In short, his approach generates the worst outcome of each of the two different plate approaches.

On the defensive side, the Reds are convinced that Francisco can hold down the hot corner. In fact, they have arguably alter the development path of Todd Frazier to accommodate Francisco. Frazier profiles best at third base, but the Reds have used him in a super utility role in part because Francisco is on a similar development time-line and has always been locked in a third base.

So, the Reds have actually gambled a decent amount on Francisco's ability to handle third base. His biggest problem continues to be his range, as he simply doesn't move all that well laterally. Unfortunately, he also struggles to convert those balls he reaches into outs, as his fielding percentage is a cause for concern. When he does get his hands on the ball, his plus arm allows him to make more plays than might be expected.

The Reds got a huge boost from Scott Rolen in 2010, but he is aging and will lug around significant injury risk for the rest of his career. As a result, Francisco possesses one of the most important things a prospect can have: opportunity. The Reds will need to have someone spell Rolen at times this year and will need to have someone lined up to replace him in the future. Francisco will likely get first crack.
Final Thoughts
Thus far, Francisco's career serves best as a cautionary tale about the difficulties of both reaching the Majors and thriving when you get there. It is not easy. Even though Francisco has been labeled one of the Reds top prospects for a couple of seasons, that's not a guarantee that Major League success will necessarily follow. Even among the very best prospects in baseball, there is still a significant risk of flaming out. It's easy to dream on prospects, but there is something to be said for established MLB talent.

Francisco's power will always be his calling card and his main value driver. If Francisco can earn the job of Scott Rolen's caddy this year, then he could surprise. In fact, if he can get an extended bit of playing time, then I wouldn't be surprised to see him have the type of small-sample size power surge in Great American Ballpark that really excites the fan base. Actually, for whatever reason, I'm somewhat expecting it. In addition to his power and friendly home park, I suspect Francisco would get some early count fastballs (which, we know he'll jump on) before pitchers develop a proper "book" on his weaknesses. At that point, he'll need to make adjustments and demonstrate the ability to cover up the weaknesses in both his approach and swing, which will be a difficult challenge.

For now, Francisco's plus-power when coupled with the Reds continued faith in him are enough to land him at #9 on the list. I remain wholly unconvinced about his ability to handle the hot corner, but Francisco will always be an offensive-first prospect, so he needs to hit (and hit a lot) to justify a spot on the 25-man roster.
Posted by Lark11 at 11:11 PM