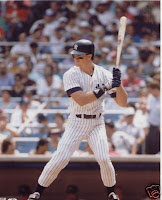 After watching Dunn continue to pile up the numbers, despite his low batting average, I thought that I'd give the Dunn bashers something that might actually justify their constant worry.

When I see a player like Adam Dunn, who is very big and not especially agile, I always thought this is a guy who is going to age poorly. People get bigger and less mobile as they age, so I think these types of players are going to be especially susceptible to the effects of aging. Mo Vaughn, Cecil Fielder, and Carlos Delgado are some of the players that I thought would be more susceptible to the effects of aging, as they don’t have much margin for error in the mobility and defense departments. Basically, I’ve always thought that big lumbering guys weren’t good bets to be of value later in their careers.

As such, I've pretty much always thought that Adam Dunn shouldn't be brought back much after the age of 30. At that point, he’ll be very expensive and his game seems unlikely to stand up to the test of time. I’m a huge Dunn backer, but I’m not sure that even I want to see him in GABP at first base or in leftfield at the age of 33.

In that same vein, I recently came across a book which contained a Bill James wrote an article wherein he discussed what he called “Old Player’s Skills” and “Young Player’s Skills”. I found it to be rather interesting, as James breaks down the issue much further, and I couldn’t help but think of a player that we all know and love (well, not all of us ;)).

In essence, James considers power and drawing walks to be “Old Player’s Skills”, as the majority of players tend to improve their power and walks as they age (I don’t necessarily agree much with the improved walk rate, but that’s a discussion for another day ;)). And, he considers speed and batting average to be “Young Player’s Skills”, as batting average and speed decline over time.

Now, here’s the part that directly relates to the Reds. James believes that young players who succeed primarily on the basis of “Old Player’s Skills” will peak EARLIER in their career and age FASTER! I’m sure we can all think of a particular Reds player who fits this mold.

I won’t get into their specific details, but James performed a couple of studies in which the players with “young player’s skills” did indeed have substantially longer careers than those who relied primarily on “old player’s skills”. Not to say that those players who relied on “old player skills” didn’t have good careers, but rather that they peaked earlier and didn’t last as long.

Recently, the writers at Baseball Prospectus recently used James’ theory to explain the remarkable career of Kevin Maas. For those of you who don’t know, was at one time the hottest thing since sliced bread. came up in 1990 at the age of 25, which is a bit old for a prospect, and hit 21 homers in 254 At Bats. exploded onto the scene that summer and was compared to everyone from Will Clark to Roy Hobbs. Maas still holds the MLB record for being the fastest player to reach 10 homeruns, which he managed to do in 77 At Bats. He captured the imagination of much of the baseball world, including me.

was a good prospect before hitting the majors, but he was one who relied on “old player skills”. He had a strong OBP and good power, but a knee injury and poor genetics robbed him of speed and agility, which made him a poor defender. He also never posted a great batting average in the minors, but likely deserved to be called up before the age of 25. After his meteoric rise, it didn’t take long for to struggle and his career flamed out at an early age.

Now, is an extreme example, but I think James may have been on to something with his theory. Now, that’s NOT to say that having a YOUNG player on the team who succeeds by virtue of “old player’s skills” isn’t a good idea, but rather that one should be wary of keeping him on the team for too long.

In other words, giving Dunn a HUGE contract after his current one expires may not be the best idea in the world, as he may well peak earlier and fade away faster than expected. And, having a big dollar contract tied up in a player of that kind could be crippling to this franchise. In James’s view, Dunn’s batting average won’t get better as he ages, but rather it’ll worsen. And, Dunn will become even more lumbering, as he adds on the pounds that come with aging and loses the speed that goes with it.

How much worse can Dunn’s batting average and defense get before it outweighs his walk and power production? At some point, the immense power and walk benefits that Dunn provides will be outweighed by his defensive, mobility, and batting average problems.

It won’t happen this year or next year or even the year after that, but it’ll likely happen SOONER than we think. Hopefully, the front office takes that into account when considering the next contract for Adam Dunn. Enjoy Dunn while it lasts, as he might not be around as long as we should hope.