Kyle Lotzkar's 2008 season was probably one of the least surprising in the entire system, in fact he did almost exactly what I thought he'd do. Of course, that description carries with it both positive and negative connotations. On the plus side, he demonstrated the flashes of brilliance that we have already come to expect from his young right arm. Unfortunately, on the downside, he suffered a not altogether unexpected arm injury, which prematurely ended his season.

It's still too early to tell, but his 2008 season may be indicative of his entire career. He has the ability to be a top of the rotation starter, but he also has some issues with his mechanics that increase his injury risk and could prevent him from reaching his impressive ceiling. For Lotzkar, it will continue to be a battle between high performance upside and heightened injury risk. Hopefully for Reds fans, the former will win out over the latter.

After a very strong 2007 debut, the Reds opted to keep Lotzkar in extended spring training to start the season. Given his age, they likely didn't want to throw him right into the mix against more advanced competition, but he was also dealing with a sore neck which ensured that the Reds would be cautious with him. Lotzkar stayed and worked out in extended spring training until the beginning of June when the Reds sent him him to low-A Dayton Dragons.

For the Dragons, Lotzkar demonstrated the kind of high-end performance that makes him a very intriguing pitching prospect. He made his Dayton debut on June 13, which was the first of 10 starts he'd make on the season. Lotzkar pitched 37.2 total innings which of course works out to only 3.2 innings per start. Given his high walk and whiff rates, it's not surprising that Lotzkar never worked past the 5th inning, as both of those outcomes require a lot of pitches. In his 10 starts, Lotzkar posted a 3.58 ERA, 1.41 WHIP, 5.7 BB/9, 12.0 K/9, and a 0.74 GB/FB ratio. And, a look at his component stats indicate that he was as good as his ERA indicates. His FIP was 3.65 and his BABIP was .321.

Unfortunately, when Lotzkar toed the slab on August 3rd against the Quad City River Bandits it would be his last outing of the season. He worked 2.2 innings before injury struck and he was forced to leave the game with a small stress fracture in his elbow.

Fortunately, Lotzkar's stress fracture was a small one, even so it's a rather unusual injury for a pitcher.

In short, a stress fracture is an overuse injury that is frequently seen in athletes. A fracture, or broken bone, is typically caused by very high force that causes the bone to break. However, a stress fracture is caused by a much lower level of force that happens repetitively over a long period of time. What makes it an unusual injury for Lotzkar is that stress fractures are most often seen in the bones below the knee (i.e. shin bones, bones of the foot, etc). Stress fractures in the upper body are rare because the weight of the body is not supported by the arms the way it is by the legs. A good example of a lower body stress fracture is fellow Cincinnati Red Chris Dickerson, whose 2008 season ended when he had to have surgery to remove a piece of bone from a stress fracture in his left ankle.

Stress fractures are usually seen in athletes who increase their level of activity over a short period of time. In Lotzkar's case, he was working his first full professional season and throwing more than he ever had in his baseball career. Typically, bones will adapt to increased workload by becoming stronger in the high stress areas, but a stress fracture may result if the bone cannot maintain the pace of the repetitive work. The typical treatment for a stress fracture is rest, but more serious fractures can require corrective surgery.

Recently, former Baltimore Oriole pitching prospect Adam Loewen was forced to give up pitching after suffering a recurring elbow fracture. Loewen originally suffered the stress fracture in 2007 and had corrective surgery that inserted a screw to stabilize the joint. Only recently tests revealed that he had reaggravated the fracture, which had widened again. Ultimately, Loewen decided not to have another corrective surgery which would keep him out until 2010, but to instead give up pitching to focus on converting to the outfield.

Seattle Mariner pitching prospect Cesar Jimenez is another prospect who suffered a stress fracture of the elbow. He opted for surgery and missed most of the 2007 season. Upon his return, the Mariners shifted him to the bullpen in part due to questions about his durability. Even so, he is throwing the ball well and should have the opportunity to pitch out of the Mariner bullpen in 2009. 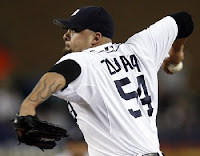 Fortunately, Lotzkar's stress fracture, which only required rest, was not as serious as Loewen's career ending injury. After resting his elbow for just a month, Lotzar was throwing again without pain. All in all, this could be nothing more than a very minor bump in the road for Lotzkar, but it certainly bears watching. Hopefully, there won't be a recurrence of the injury, because, as Adam Loewen demonstrated, it can pose a serious threat to a pitcher's career. 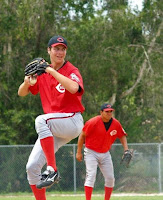 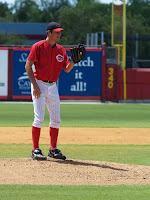 Lotzkar features three quality pitches: a 90-93 mph fastball with good movement, a biting curveball that he has tightened up, and a developing change-up. He has a good feel for pitching, which helps his pitches play up a tick, and he's comfortable throwing all of his pitches. His biggest problem is his control, as he issues a lot of free passes, which really isn't surprising given his age. Fortunately, that's a problem that can be corrected with experience and improvement would really unleash his potential.

As for his mechanics, Lotzkar still has a red flag in his delivery. He has a fairly loose arm action, but he brings his pitching elbow up above shoulder height after breaking his hands (see Zumaya photo, who shares both the high pitching elbow and "coincidentally" the stress fracture injury), which can increase the stress on the arm. Given the heightened risk of injury created by his delivery, it's not surprising that he suffered an arm injury during his first full season. Hopefully, it's not a sign of things to come.

Overall, the only real drawback on Kyle Lotzkar is the risk of injury. Outside of that, he's got the body type that scouts dream on, the pure stuff to be a dominant pitcher, and a good feel for pitching. In addition, he seems to have good makeup and a strong work ethic, which are underrated attributes in prospects.