That's the only question that matters at this point. We'll take the usual spin through his attributes and circumstances, but it all comes down to those three little words.

Billy Hamilton has development risk centered on his hit tool, but he lands at the top of the list because the only competitors in the system for the slot are pitchers, who carry their own bundle of risks, both development and injury. And, none of the pitchers are as freakish as Hamilton. In the last few years, the Reds have acquired and developed two physical freaks, Aroldis Chapman with his 105 mph fastball and Hamilton with his off-the-charts running speed.

Uniqueness and scarcity drive value. And, there is no prospect more unique than Billy Hamilton, which elevates him to the top slot on this list.

The Reds selected Hamilton with the 57th overall pick in the 2nd round of the 2009 draft. It may ultimately prove to be the best value pick of the draft. Hamilton was drafted out of Taylorsville High School in Mississippi, where he was a three sport star, and the Reds managed to sign him away from a football scholarship to Mississippi State.

His pre-draft reports all rated his athleticism as plus, but his polish as raw. The fact that he split his time between three sports meant less experience on the diamond. That, coupled with the football scholarship, caused him to slide down draft boards, enabling the Reds to land him in the 2nd round.

Hamilton started off the 2012 season at high-A Bakersfield. During his time with the Blaze, Hamilton established himself as a potential impact player, whereas prior to the season he was more curiosity than top prospect.

In light of Hamilton's offensive profile, that of table-setter and speed merchant, the most impressive aspect of Hamilton's 2012 season was his Isolated Discipline (IsoD), as his OBP was 90 points higher than his batting average at Bakersfield and 120 points higher at Pensacola. That is an extraordinary rate for the simple fact that pitchers have all the incentive in the world to keep Billy Hamilton off the bases. Given his limited power and unlimited speed, pitchers should be looking to pound the strike zone all day long. Even if he puts the bat on the ball, it's unlikely to leave the yard, so there is little danger of mistakes being punished. On the other hand, if he gets on base, he'll wreak havoc. So, the fact that he drew walks at such a high clip at two separate levels is impressive.

I have to think a significant portion of it has to do with pitchers being unable to consistently throw strikes, which won't be the case at the higher levels, but Hamilton deserves credit for embracing on-base percentage as a necessary means of utilizing his speed. It's very rare to find a player with elite speed. It's almost inconceivable to find a player with elite speed who reaches base at a good clip. Hamilton obviously qualifies as the former, but it's looking like he has a real chance to be the latter.

Hamilton is a natural righthanded hitter. The Reds converted him into a switch-hitting when he joined the professional ranks in order to capitalize on his speed. Oddly enough, I actually slightly prefer his lefthanded swing mechanics.

Here is a great look at Hamilton, courtesy of BullpenBanter on YouTube:


From the right side, he utilizes a slightly wider than shoulder-width stance and a high back-elbow. In his pre-pitch routine, he uses a small bat waggle and, as befits his high energy, always-on-the-go style, constantly grips and re-grips the bat.

As the pitch is delivered, he flexes his elbows inward, which brings the barrel of the bat into a more vertical position. He then utilizes a two-step stride. The first step is a toe-tap, picking his foot up and placing it back down, which enables him to shift his weight towards his back foot and serves as a trigger for drawing his hands back into hitting position. As he draws his hands back into position, he raises his back elbow up even higher, to the point that it's above shoulder level. That high back elbow could add length to his swing path, making him slower to the pitch. The toe tap also serves to cock his hips. After a slight pause to generate load, he strides forward to meet the pitch. This second step of his stride leaves him in a fairly spread out hitting position. One potential problem with his longer stride is that his head drops significantly, which means that his eye level is not consistent throughout the swing. This lack of a consistent eye level could lead to problems with pitch recognition. 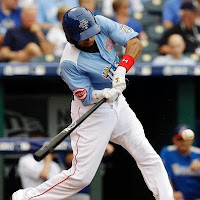 At this point in the swing, there is inconsistency. Hamilton occasionally restricts his hip-rotation (see video: swing at the 4:24 mark resulting in weak ground out), which generates most of the power in the swing, by not getting up on his back toe. The limited hip-rotation leaves him with more of an upper-body driven swing, which at times appears to give him some push to his swing. While this limits the power in his swing, he still has the ability to drive the ball.

The restricted hip-rotation also restricts his follow-through, as by not coming around on his back foot, his body doesn't release as completely as it otherwise would. So, frequently, his upper-body continues to rotate in his follow-through, while his hips stop prematurely. Again, this limits rotational force to impart on the ball, but it may make him slightly quicker out of the box. I'm not convinced the benefits of the latter outweigh the detriments of the former, but it's worth noting.

When he doesn't restrict his hip rotation, his ability to drive the ball increases (see video: swing at 5:14 mark resulting in a triple). His hips come around more effectively, he gets up more on his back toe, and his follow-through is less restricted.

From the left side, his unnatural side, Hamilton actually looks a touch more fluid (see video: swing at 5:44 mark resulting in a triple), though there are a number of similarities. He starts from a similar wider than shoulder-width stance and uses a bat waggle. He uses the same two-step stride, unweighting the front side, transferring the weight to back foot, and drawing his hands back into hitting position. Again, as he draws his hands back into hitting position, he raises the back elbow above shoulder level. However, one of the differences between his right and left handed swings is the location of the hands at hitting position. From the left side, his hand position is lower and farther back, whereas from the right side his hand position is higher up. The left side position is preferable, as the high position from the right side gives his swing, when coupled with his dropping head, a more downward swing plane and could add length to the swing leading to difficulty handling inside pitches.

His left side swing also occasionally restricts the hip rotation by not getting up on the back foot, which results in a lesser level of force generated. However, he has pop when he does effectively rotate his hips.

Overall, I think Hamilton has a solid set of hitting mechanics and the athleticism to make them work. There are a few issues of concern, including (1) the higher hand position from the right side and, from both sides, (2) the inconsistent hip rotation and (3) the dropping eye level. Even so, Hamilton's speed makes Ichiro his closest MLB equivalent. Hamilton could be successful using Ichiro's slap-and-dash style, but he also has power projection to his game that could bring him success without having to match Ichiro's ridiculous contact skills.

Oddly enough, Hamilton's elite speed also helps his power play up to an acceptable level. Hamilton will never have plus power, but his speed requires infielders to play in when he's at the plate. Not just the corner infielders, but also the middle infielders. The second baseman may have to cheat in to handle drag bunt plays, either fielding or getting over to cover first in time. Also, the shortstop may have to cheat in to handle ground balls in the 5.5 hole, as Hamilton will beat out many, many balls hit in that direction. The fact that the entire infield has to play in on Hamilton will enable him to drive the ball through the infield with greater ease. If they lay back, he can beat the play with his speed. If they play in, then he should have enough pop to drive the ball through the infield.

Another way in which Hamilton mitigates the risk in his hit tool is through effective use of the bunt. For Hamilton, it is a weapon unlike any other and he isn't shy about deploying it. Hamilton understands that his job is to get on base and he has embraced the bunt as way to do just that. Oddly enough, Hamilton seems more comfortable bunting from the leftside than his natural rightside.

On defense, Hamilton will likely be just fine in centerfield. As it stands, his reads are average at best, but his speed allows him to outrun any mistakes he may make. More experience will allow him to improve his reads off the bat, making him an above average centerfielder. For now, he's making progress.

As for his speed, it's obviously his calling card. And, frankly, he might be the fastest player in history. If not, he's in the conversation. That's not hyperbole. Not only is Hamilton fast, but he's very quick. So, he's up to full speed after only a step or two. He glides across the turf when he runs. Brian L. Hunter was the same way, but he glided across the turf with long, loping strides that just chewed up ground. Hamilton glides and is very light on his feet, but his strides are shorter and his legs are pumping very quickly. Just watching him move makes you think of fast-twitch muscle, as he's like a coiled rubber-band, always on the verge of exploding into movement.

Billy Hamilton is unique and has the chance to be special. He still needs some development time, probably a full season of triple-A. That would give him more ABs from both sides of the plate and allow him to gain more experience in centerfield. In this instance, I think patience would be a virtue, as rushing a prospect up the ladder can stall his development. Hamilton's relative inexperience and change of defensive position are reasons enough to delay his arrival at the Major League level. In reality, the Reds are in win-now mode with a centerfielder who has simply failed to do the job, which could result in Hamilton arriving sooner rather than later.

Overall, if things break right, Hamilton could be a special talent. He understands and embraces the offensive profile he needs to adopt to utilize his abilities, has the confidence and daring needed to be an impact baserunner, and has the plus athleticism to continue improving. There are a few red flags in his hitting mechanics that could be exploited by advanced pitching, but he has time to refine his mechanics and the athleticism to possibly overcome the flaws if he doesn't. For now, his elite speed gives him a very high ceiling, while his hit tool gives him a fairly low floor. He has a wide disparity in potential career paths, but his ceiling is enough to land him at #1 on the list.