To date, Kyle Lotzkar could be the poster child for TINSTAAPP. Coined by Baseball Prospectus, it's an acronym for There Is No Such Thing As A Pitching Prospect. The underlying idea being that pitching prospects bring so much inherent risk (in the form of both injury risk and development risk) to the table that their development cannot be accurately predicted or relied upon by their organization.

Due to their similarities, Kyle Lotzkar has always been linked with Josh Ravin in my mind. Both were/are high upside righthanded pitching prospects selected out of high school, Ravin in the 2006 draft and Lotzkar in 2007. Rather than send you careening through historical blog posts, I'll save you the time and tell you that I always preferred Josh Ravin.

They had similar stuff, Ravin the bigger fastball and Lotzkar the more refined offspeed offerings. They had similar physical stature, both standing 6-5, and the same handedness. It came down to Lotzkar's advantage in polish/pitchability and Ravin's advantage in mechanics. I (rightly) believed Lotzkar would struggle to stay healthy and (wrongly) believed Ravin's picture perfect mechanics would lead to improvements in command. Does that mean that proper pitching mechanics are more closely correlated with injury prevention than improved performance? Probably not, but something worth considering.

As for Lotzkar, his development has been derailed time and again by injury. To his credit, he continues to bounce back, but his projected ceiling and floor have fallen.

It seems like Lotzkar has been around forever. How long has he been around? The Reds selected him with the 57th overall pick in the supplemental 1st round of the 2007 draft. The Reds received that pick as compensation for losing Scott Schoeneweis.

Part of the reason why it seems like Lotzkar's been around so long is because he was so impressive when he first arrived, easily handling low-A hitters as an 18-year old in 2008. After that season, Baseball America called him "...the Reds most promising young pitcher...with the potential to have three plus pitches...who could become a No. 2 starter." Unfortunately, injuries have plagued his professional career and the list is long and distinguished.

In his minor league career, Lotzkar has suffered a stress fracture in his elbow (2008), required Tommy John surgery (2009), and strained a hamstring (2011). As a result, prior to the 2012 season, in which he logged 112.2 innings, his heaviest professional workload had been just 66.2 innings.

Despite being selected way back in the 2007 draft and making a professional debut that looked like he could rocket to the majors, Lotzkar has yet to climb past double-A.

For double-A Pensacola, Lotzkar posted a 5.21 ERA, 1.51 WHIP, .238 BAA, 0.71 GB/FB ratio, and 96/53 K/BB ratio over 18 appearances, including 17 starts, and 86.1 innings. Lotzkar seemed to tire in the second half and his workload was limited by the organization. He was capped at 80 pitches in most of his starts down the stretch. So, while he pitched a career high in innings, it must be noted that it was still a regulated workload. At this point in his career, it's somewhat disconcerting that the organization still feels the need to impose unique restrictions on him.

While the workload and strikeout rate were impressive, he certainly took his lumps. His FIP mark, 4.93, was better than his ERA, but not by much. It is encouraging that his K/PA was essentially the same at high-A (24.5%) and double-A (24.4%), but going forward he'll need to demonstrate that he can perform at a high level against advanced hitters and handle a heavier workload.

One of the first things that jumped out at me (and most everyone else) when Lotzkar joined the organization was the high back elbow in his arm action. He let the elbow rise above shoulder level on his arm swing. When you pair the high back elbow with either an over-the-top or high three quarter arm slot, then it necessarily creates a high stress lasso-like arm action. Many believe, myself included, that this lasso-like arm action significantly increases the risk of an arm injury. To eliminate the stress on the arm, I even suggested that Lotzkar might be wise to drop his arm slot rather than try to lower his back elbow. Either change would reduce the lasso-action, but the arm slot is easier to change than the ingrained muscle memory of the arm swing. Lotzkar opted to change the latter. 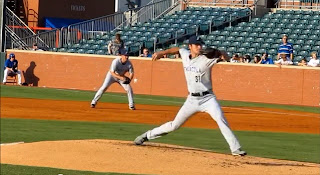 To date, Lotzkar has done a nice job of reducing the height of his back elbow (see above photo). He hasn't eliminated it entirely and it's still going to lead to increased stress on the arm, but he's reduced it to the point that it isn't the worry it once was. It's easier to imagine his current arm action holding up than the previous incarnation. Unfortunately, the arm injuries he has already suffered can't be similarly eliminated. Despite the wear-and-tear and changed mechanics, Lotzkar has maintained good stuff, an impressive feat on its own.

Here's a look at the newly refined mechanics of Kyle Lotzkar, courtesy of MetsgeekTV on Youtube:

As you can see, Lotzkar starts with a very small Rocker Step towards first base, allowing him to shift his right foot down onto the rubber before bringing his left leg up into a leg kick. His Rocker Step is so small that it gives his windup a very restrained and tentative look, a look exacerbated by the leisurely tempo of the delivery. Unlike most modern pitchers, Lotzkar brings his arms up over his head during the Rocker Step, but the arms don't seem as tied to the other movements of the body as expected, which gives his windup a looser look. His leg kick comes up past parallel and he incorporates some body coil by slightly wrapping his leg kick knee around his body at the apex of his leg kick. This wrapping creates potential energy in the tension of the spine that can ultimately be transferred to the baseball.

When Lotzkar reaches the apex of his windup, he starts his drive to the plate. However, as with his Rocker Step, his stride to the plate seems restrained and tentative. The tempo remains leisurely and the stride lacks aggression. While the stride is of a generally acceptable length, it seems short for a taller pitcher with a "power pitcher" profile. Further, his stride foot lands to the third base side, a closed off position (see photo below) resulting in a cross-fire delivery. His throwing arm has to work across his body in order to throw the pitch. 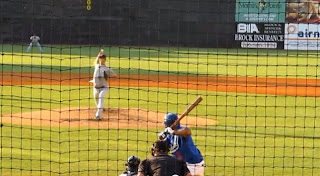 The combination of the shorter Rocker Step and Stride gives his delivery an upright, somewhat stiff appearance. The shorter, closed off stride also effectively limits his hip rotation, as it simply doesn't allow enough room for the hips to fire. As a result, there is a limited differential between his hip and shoulder rotations (see above photo, restricted hip rotation and earlier shoulder rotation), hindering his ability to generate force with his entire body. The limited hip rotation doesn't permit him to delay the rotation of the shoulders long enough to efficiently sum the force generated by the body during the windup. Force not generated by the body must be generated by the arm, which increases stress on the arm.

As for the arm action itself, Lotzkar uses a high three-quarter arm slot (see photo below) and repeats it consistently. 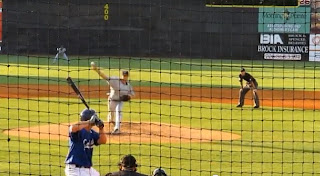 Finally, Lotzkar also does a solid job in the deceleration phase of the delivery, as the throwing shoulder is closer to the plate than the glove side shoulder at the release point, the arm pronates quickly after release (see below photo), and his throwing arm finishes down by his left hip as the body continues to rotate around the front hip. 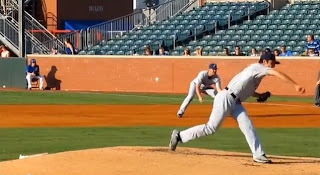 Overall, Lotzkar's mechanics have improved, as reducing the high back elbow alone is enough to warrant that label. However, potential issues remain. The back elbow is still higher than ideal, the drive to the plate lacks aggression (which limits the generation of force), and there is limited differential between hip and shoulder rotation (which hinders the transfer of force to the baseball).

Despite his injury problems, Lotzkar still features a 90-94 mph fastball, a hard curveball, and a fringy change-up. His curveball is hard biting and can generate swings-and-misses, giving him a true out pitch. Lotzkar's changeup is respectable, but doesn't offer much in the way of movement or deception. All told, Lotzkar's arsenal still ranks among the best in the system. He also has solid command, spotting his fastball and changeup well, and controls his curveball.

It's rather impressive that Lotzkar has retained the velocity on his fastball and bite on his curveball after all his injuries and reworked arm action. The repertoire remains intriguing and could still carry him to the big leagues, though he may now be better suited to working out of the bullpen. Working as a reliever may lessen his injury risk and allow his velocity to play up a notch. And, given the Reds crowded rotation, it may ultimately prove to be Lotzkar's best and quickest path to the majors.

It's lather-rinse-repeat with Kyle Lotzkar. He still has the arsenal, physical stature, and good makeup that made him easy to project as a potential impact arm. And, he still has mechanical issues and injury risk that could derail his career. Lotzkar refined his arm action without losing anything tangible off his performance level, which is an accomplishment in and of itself, but now he needs to get back on the right development track.

Pitchers have a finite number of bullets in the gun. This is especially true for pitchers with mechanical issues that heighten the risk of injury. After a slew of injuries, Lotzkar needs a speedy development path to the majors. If he has a finite number of pitches in his arm, then he needs to use them at the major league level. Where they'll count for something.

For now, Lotzkar lands at #15 on the list. The hour is getting late for Lotzkar. A strong, healthy season could see him climb his way to the majors or at least continue on a development path that will put him in the mix for a spot on the 25-man roster in 2014. Lotzkar still brings more risk to the table than most pitching prospects, so he's starting to resemble a long shot, but he's closer to making good on his potential than he has been in recent years.