Joey Votto is one of the best hitters in baseball. Eric Hosmer was reputed to be the next Joey Votto. It hasn't worked out quite that way. One of the main reasons for Hosmer's struggles is his inability to pull the ball with authority.

You can't be a complete hitter without the ability to hit the ball to all fields. On the other hand, you can't be an impact hitter without the ability to pull the ball with authority. A hitter like Tony Gwynn probably comes the closest, but when he used to talk hitting with Ted Williams one of the things Williams encouraged him to do was turn on inside pitches with power rather than keeping his hands inside the ball to flip it to leftfield. For Hosmer to reach his max projection he simply must pull the ball with power.

One theory for Hosmer's struggles with pulling the ball is that he loads his hands too high and too far back. By loading his hands in that way, he increases the distance his hands have to travel to get the bat to the point of contact. In essence, he can get tied up on the inner half because he has increased the length of his swing.

Personally, however, I think the problem has more to do with what happens after the point of contact. To me, the problem with Hosmer is that he has a tendency to not roll his wrists. I simply don't know how you can consistently hook or pull the ball without a strong wrist-roll.

To illustrate Hosmer's problem, here's a look at his swing in comparison with that of former NL MVP Joey Votto.


In this first set of photos below, both Hosmer and Votto are in good position. They have firm front sides, strong hip rotation driving them up onto the toe of the back foot, their back elbows are in close to the back hip to effectively sync up their hip rotation with their arms, and they have their heads down and on the pitch.


In the second set of photos, they both remain in good position. They have extended out through the point of contact and are now at the point where they need to roll the wrists. After this point, the swings begin to diverge.

Votto has started rolling his wrists, Hosmer has not. Votto's position is incredibly strong, Hosmer's is not.


In this fourth set of photos, you can further see the difference between the two hitters. Again, compare the positions of the top hand on the bat. Hosmer still has his palm facing the sky, while Votto's palm is facing the ground. Votto has rolled his wrists, Hosmer has not.

You can also see the obvious difference in the position and angle of their bats. Votto's bat comes around and over, finishing naturally, while Hosmer's bat does not come around and over, rather points towards the sky before finishing somewhat unnaturally. Hosmer's bat simply can't come around his body naturally because his chicken-wing is blocking the way, forcing his bat over-the-top into a more vertical swing path.


And, in this fifth set of photos, you can see the problem from a different angle. Again, the palm of Hosmer's left hand is facing the sky, while the palm of Votto's left hand is facing the ground. And, again, Hosmer is using the chicken-wing follow-through with his right elbow, whereas Votto's right elbow is pointed to the ground and in close to his body.

Votto has rolled his wrists, while Hosmer has not. Given his hand position in the below photo, it's difficult to imagine Hosmer being able to effectively pull the ball.

And, in this sixth set of photos, you can again see the difference between the swings, especially in the angle of the bats. Hosmer's points to the sky because he hasn't rolled the wrists, while Votto's bat is more level with the ground. Hosmer's up-and-over swing path simply doesn't lend itself to pulling the ball. 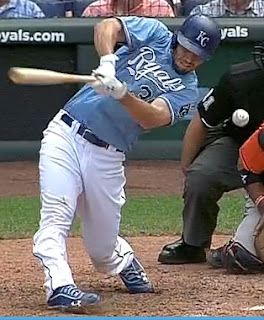 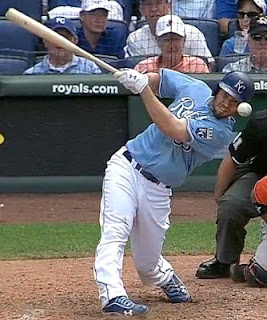 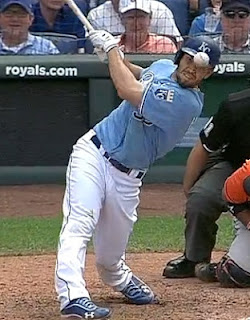 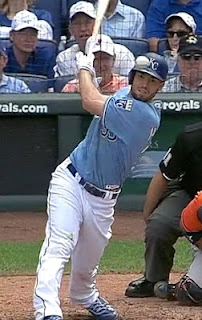 Again, he's not using an effective wrist-roll, instead he's pulling the swing through with a chicken-wing right elbow and letting the top hand come off the bat as the bat points skyward during the swing path. I mean, just focusing purely on his hands, the positions in which he puts them during his follow-through look really uncomfortable. You can also see, based on the flight path of the ball, that's he shooting this ball to the opposite field.

Now, on the plus side, Hosmer doesn't always use this follow-through. I haven't figured out exactly when and why he uses it, though I suspect it happens on inside pitches. It's likely his way of pulling his hands in on inside pitches, but it's certainly not conducive to pulling the ball and is likely the reason why he has stopped hitting home runs.


Curiously, on May 30th, the Royals replaced their hitting coaches, Jack Maloof and Andre David, with Hall of Famer George Brett. Now, I'm not sure if Brett has made an immediate, tangible impact (correlation or causation? I don't know), but it can't be denied that Hosmer has once again begun to pull the ball with power. In fact, he pulled two home runs to right field over the last week. Notably, those two home runs were hit with swings that more effectively utilized a wrist-roll.


Here's a screen shot of his homer to right field against the White Sox on June 21st: 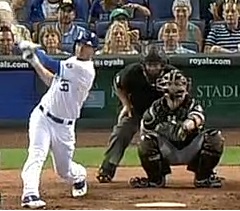 If you look at the top hand, then you can see the palm is facing the ground. In addition, the bat angle is flatter, rather than pointing directly towards the sky, and the chicken-wing is gone, as the right elbow is pointed down and is in close to the body. It seems like a swing that ensures better rotation and release, enabling him to pull the ball with power.

And, to further drive home the point, here's a screen shot of a homer he hit to right field on June 25th, this time against the Braves: 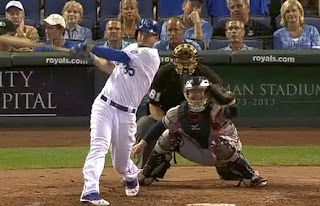 Even more encouraging, his bat angle is even flatter and the palm of the top hand is facing the ground to an even greater degree. His wrist-roll has also eliminated the chicken-wing right elbow follow-through. In fact, the above finishing position looks a great deal like that of Joey Votto in the sixth set of photos. If Hosmer continues to use this wrist action and follow-through, then his offensive production should improve going forward.

Hosmer has the ability and the bat speed to hit the ball with substantial power. Fortunately, it looks like he, possibly with George Brett's help, is getting back to using proper swing mechanics, which should unlock that power, especially to the pull-side, and move him closer to the impact hitter he was projected to be.

The moral of the story, kids, is to always roll your wrists in your follow-through.