In the past couple of years, the Reds farm system felt thin at the upper levels. Now, it feels thin just about everywhere. That's problematic because the Reds haven't been able to get over the hump at the MLB level and now face two division rivals who rival the Reds' talent at both the major and minor league levels. However, there a few prospects who could develop into valuable pieces for the Reds if they can manage their remaining development risk. One such prospect is Carlos Contreras.

The Reds have done a nice job of stocking the farm system with prospects signed out of Latin America. Curiously enough, aside from Aroldis Chapman, they have had better success with the inexpensive signings (i.e. Cueto, Gregorius, Corcino, Contreras, etc) than they have with the more high profile signings (i.e. Yorman Rodriguez, Juan Duran, etc).

If Contreras can step forward into potential impact prospect status, then it would really boost the farm system going forward.

Patience. That's what the organization has been with Contreras, who was signed by the Reds out of the Dominican Republic in 2008. The Reds were conservative during his first four professional seasons, sending him to various short season rookie leagues. He spent the first two in the Dominican Summer Leagues, the third season in the Arizona Rookie League, and the fourth with the Billings Mustangs in the Pioneer League.

Finally, in 2012, he was ready for full season ball and split time between low-A and high-A. Even in full season ball, he only logged only 60.2 total innings. To that point, he worked primarily as a reliever, but the Reds took the training wheels off in 2013. 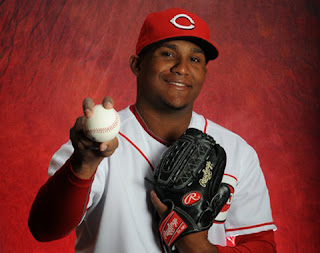 In 2013, Contreras moved into the rotation full-time. He started out in high-A Bakersfield, more commonly known as hitter's heaven, and more than held his own. He threw 90.0 innings over 18 starts in which he posted a 3.80 ERA, 1.23 WHIP, 4.1 BB/9, and a 9.6 K/9. Impressively, he maintained the high strikeout rate that he flashed out of the bullpen over longer outings in the rotation. He earned a bump to double-A Pensacola.

For the Blue Wahoos, Contreras actually found a bit tougher sledding. He actually dropped his ERA, but his peripherals took a tumble. He worked 42.1 innings over 8 starts, posting a 2.76 ERA, 1.35 WHIP, 4.5 BB/9, and 5.5 K/9. He'll need a return engagement at double-A, but overall it was a strong season and a significant step forward in his development.

Finally, in the middle of his 2013 season, Contreras made an appearance in the MLB Futures Game. During his appearance, Contreras worked exclusively out of the stretch. Of course, the first batter he faced reached base and there were runners on base the rest of the time, but he still started off the inning out of the stretch. Maybe not surprising given his bullpen background, but maybe reflective of a lingering reliever mindset.

He worked 2/3 of an inning and had to consistently work through some trouble. It's difficult to draw too many conclusions from such a short appearance, but his fastball seemed to clock in from 89-96. His change-up was very impressive, showing good tailing and sinking action. The bottom really fell out of it. The breaking ball was tougher to get a read on, as he threw a couple of mid-70s breaking balls that were loose and really rolled, but also some tighter, sharper breaking pitches in the low 80s.

Contreras starts with strong rocker step towards first base, allowing him to rotate his plant foot down and onto the rubber. That strong first step flows smoothly up into his leg kick, which subsequently flows into his stride. There's a real and natural fluidity to his mechanics. After the rocker step, he rotates his body and brings his leg up into the leg kick. His leg kick comes up a tick past parallel and includes some leg wrap, which generates tension in the spine through body coil.

At apex, Contreras maintains good balance and effectively stays over his plant leg to gather his momentum before driving to the plate. He has a fluid unpacking of the leg kick and solid stride length. His stride isn't quite as long as might be optimal, but it's long enough that it allows him to (1) effectively rotate the hips, and (2) effectively get his momentum out over the stride leg in the delivery.

As for his arm action, it's clean. He maintains his elbow in proper position relative to his shoulder throughout the delivery and gets his arm up into proper throwing position at foot strike. He uses a high three-quarters arm slot with a loose arm action.

After he releases the pitch, he enters into the deceleration phase. However, Contreras occasionally has a bit of recoil in his delivery. After his pitching arm comes down past his left hip, it occasionally bounces back up, instead of finishing low on his left side, a bit more than is ideal. This recoil occurs in tandem with an upright follow-through, as his upper body doesn't release and finish out over his plant leg, which restricts the ability of the delivery to dissipate the force.

Here's a look at Contreras in action, courtesy of ProspectNotes on YouTube:


The consistent knock on Contreras in the scouting community is that he's "long in the back", a result of a long arm swing, leading to inconsistency in release point. But, I'm not overly concerned about that. If there's anything that jumps out to me it's that he seems highly rotational in his delivery. Instead of driving his momentum directly to the plate, his momentum seems to rotate around his body a tick too much. The main reason for that is the shoulder rotation, which seems to happen earlier than I'd like to see. The shoulder rotation in combination with the lower arm slot and upright follow-through gives his delivery a rotational look.

If I was going to address the control problems, then I'd start by having him keep his lead shoulder tucked in longer. I'm not really worried about the longer arm-action in the back, but if he flies open too soon with the front shoulder, then he may consistently miss his spot to the arm-side with the fastball and may pull his breaking ball too far to the glove-side. If he drives his chest towards home plate a bit more, then it'll help delay the rotation of the shoulders a tick longer, give him a less upright finish in the follow-through, and improve the consistency of his release point.

Overall, Contreras has solid, functional mechanics. On one hand, there aren't any major red flags indicating heightened injury risk, on the other they aren't so impressive that they'll lead to increased performance benefits.

Contreras features a fastball that sits 92-94 and touches 97. His change-up has plus potential and very good tailing, sinking action. He also uses a slurvy breaking ball that sits in the low 80s, though I've seen a few slower pitches in the mid-70s, but needs to be tightened up to avoid inconsistency and rolling. His change-up is currently more advanced than his breaking ball, which means he is frequently more effective against lefties than righties. The change-up sinks and tails away from lefthanded hitters, while the breaking ball isn't always sharp enough to be effective against righthanders.

Another consideration is whether Contreras' height will allow him to succeed against advanced competition, as he'll struggle to get downward plane on the fastball, leaving him with a flatter fastball that lingers longer in the contact zone. However, fastball effectiveness is largely a function of (1) velocity, (2) movement, (3) command, and (4) downward plane. You don't need all four components to have an effective fastball, but you do need the right mix.

Tim Lincecum is a good example. He's also an "under six feet" righthanded pitcher, but his fastball helped him win two Cy Young awards because of its plus velocity and movement. Early in his career, it didn't matter that he lacked downward plane and it didn't matter that he didn't have Greg Maddux like command. However, now that he's in mid-career and has ~1400 MLB innings under his belt, his velocity has declined to the point that the lack of both plus command and downward plane has become problematic.

The component mix on Lincecum's fastball is out of balance and, as a result, he's struggling because he now lacks the velocity to overcome shortfalls in the other components. The result is that Tim Lincecum is more hittable than he used to be, as his fastball is now flat and slow. To take his game back to his previous performance level, he'll need to find improvements in fastball command or velocity.

The takeaway is that Contreras doesn't necessarily need significant downward plane to be successful as long as his blend of velocity, command, and movement is sufficient to overcome the flatter plane on his fastball. Currently, his velocity is strong, but he'll need to show improved command or movement to get away with minimal plane on his fastball.

While he has the right blend of components to have an effective fastball, he still needs to refine his breaking ball, as he can't work effectively in the rotation with just a fastball and plus change-up.

In a farm system that is short on both depth and upper echelon talent, Contreras makes for an intriguing prospect. He needs to refine his repertoire in order to avoid having a reverse platoon split, as he currently lacks a consistently effective breaking ball that moves away from righties. His change-up has very good sink and tails away from lefties, so as of now he's better suited to success against opposite side hitters, which is unusual. He also needs to refine his mechanics to take his command and control up a notch.

There is still some development risk with Contreras, as despite the slow march up the development ladder, he still has some work to do. Ideally, he'll develop into a viable starting pitcher, but a return to the bullpen is a legitimate fallback option. His fastball would play up in short stints and a limited repertoire would play better without having to face hitters two and three times a game.

Still, there are some intriguing elements to his game that could, if things break right, turn him into a valuable pitcher at the MLB level. Given that the Reds have locked in several players to long-term extensions and have several more on the verge of big paydays, they could use all the inexpensive homegrown talent they can find.