The Reds selected Jesse Winker in the supplemental first round of the 2012 draft. It's already looking like a very shrewd selection. Winker was drafted out of Olympia High School in Florida, the same school that produced notable players/prospects like Brad Miller, Walker Wieckel, and Mason Williams.

Despite his youthful age and limited professional experience, Winker already exhibits an advanced approach and good feel for hitting. The Reds have had tremendous success in drafting and developing homegrown talent over the last decade. They have developed position players and pitchers of all types and profiles, but one area where they have come up a bit short is in impact bats. Jesse Winker is the best bet in the system to develop into a pure, complete hitter.

Winker spent the entire 2013 season with low-A Dayton. For the Dragons, he posted a rock solid slash line of .281/.379/.463/.841 over 112 games and 417 ABs. He also posted an impressive 75/63 K/BB ratio, showing an impressive ability to control the strike zone, and flashed developing power, 18 doubles and 16 homeruns. For his professional career, Winker has almost as many walks (103 BBs) as strikeouts (125 Ks), which portends very well for continued success as he can work deep into counts to draw walks but has the hit tool and 2-strike approach needed to limit the strikeouts. Further, Winker's homerun spray chart reveals that he hit 4 to left field, 2 to center field, and pulled 10 to right field, so he does a nice job using the entire field.

Thus far, the Reds are keeping Winker on a deliberate and linear development path, with one stop per season and a one level advancement from season 1 to season 2. It seems like the appropriate development plan for Winker, a polished high school hitter who has yet to find a level he can't handle.

If the Reds hold true to form, Winker will start and finish the season at high-A Bakersfield. But, if Winker hits well against the more advanced competition, then he could jump on a faster development track.

In last year's write up, I talked at length about the unusual arm-bar he uses in loading the hands and the corresponding hand manipulations he is forced to use to overcome it. I also wrote that "a mechanical issue isn't a flaw until it demonstrably impacts a player's performance level." Winker's arm-bar hasn't yet proven to be a flaw because he continues to produce. So far, so good.

Even so, it's an issue worth mentioning again. At times, it seems like Winker has diminished the arm-bar action in his swing, but it's definitely still there. And, as with last year, I feel like comparing Winker to John Olerud, who owned a highly effective and yet very simple swing, at similar points in their respective swings effectively illustrates the point. 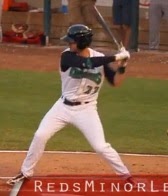 On the left, you can see John Olerud in action. His lead arm has more bend to it and his lead shoulder and hip have yet to open up. On the right, you can see Jesse Winker in action for the Dayton Dragons last season. Once again, Winker's swing places him in an atypical position, as his lead arm is barred and his back elbow is already tucked in close to the body. The position of his arms actually gives the appearance that he's going to come completely over the top in his swing. In addition, Winker's front hip is opening up earlier than Olerud's. But, to date, Winker's swing has yet to fail him, so this remains an issue merely worth watching, rather than a swing flaw. He obviously incorporates whatever in-swing hand adjustments necessary to make his arm-bar load functional.

Despite the deeper loading of the hands, as created by the arm-bar, Winker still manages to use a short, compact swing. His hand path to the point of impact is direct and efficient, which reduces the length of his swing and reduces the chances that he'll be tied up on hard, inside pitches, a typical concern with arm-bar swings.

Winker starts with a slightly wider than shoulder-width stance and a small bat waggle in his pre-pitch stance. He uses a high leg kick to transfer his weight forward to meet the pitch, which can occasionally throw off his timing when he gets fooled by offspeed pitches and has to slow his swing to try to make contact. As his stride foot touches down, he begins to draw his hands back to load up, triggering the aforementioned arm-bar issue, and starts to fire his hips. His hand path to the ball is short, which makes him quick to the ball. He brings his back elbow into his back hip, syncing his upper body to the power of the hip rotation. His hip rotation drives his weight up onto the toes of his back foot and he effectively firms up the front-side, allowing the force generated by the rotation of the hips to rotate around an anchored point.

In the below photo, you can see the very strong position that he gets into at the point of impact: 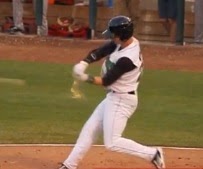 Winker gets good extension through the point of impact and uses good hand-eye coordination to consistently get the barrel of the bat on the ball. His swing seems short to the point of impact, but longer out-and-through the ball, which should give the valuable mix of contact ability and power production. I would like to see him hold off releasing the bat just a hair longer in the swing, maintaining a smaller angle between bat and left forearm for a longer period of time, to avoid any early casting of the bat head and maximizing the rotational power of the swing. IF he can delay the release of the bat head a hair longer, it may help him unlock his power potential going forward by generating a bit more leverage. Still, his good size should enable him to add more muscle/strength to his frame and it already allows him to generate good leverage in his swing.


Here's a look at Winker in action, courtesy of RedsMinorLeagues on YouTube:

Overall, there is a great deal to like with Jesse Winker. He has the pitch recognition skills and disciplined approach needed to control the strike zone and generate high walk rates. He has the hand-eye coordination and strong wrists needed to make consistent, hard contact. And, there's untapped power in his swing that could take his hitting to a whole new level. He also already has a mature approach, utilizing the entire field.

Currently, Winker is the best pure hitting prospect in the Reds system and the upside is both undeniable and tantalizing. If he continues on his current development path and adds a touch more power, then his offensive ceiling will be sky high. And, his current batting average and on-base skills give him a fairly highly floor.

On the defensive side of the game, Winker is likely to be relegated to left field or first base. Though, Joey Votto obviously presents something of a roadblock to playing time at first (understatement alert!), so left field is the likely home for Winker.

Ultimately, Winker's lack of athleticism will likely preclude him from ever being a plus defensive player, but he could be a solid, non-liability in left field. He'll need more innings under his belt to improve his reads off the bat and improve his comfort level out there. He's a prospect who takes pride in his defense and wants to be a well-rounded player, which bodes well for his development in this area.

Winker will always be a bat-first prospect, but he should have enough ability in left field to avoid having his defense act as a drag on his overall value.

When you are evaluating Jesse Winker, you are evaluating his hit tool. He's a bat-first prospect who will go as far as his hitting will take him. He doesn't have the speed or defense that drives the value of other prospects, so there is much greater emphasis on his hitting. That said, despite my lingering reservations about how he does what he does, I feel like there could be a significant breakthrough on the horizon for Winker.

Winker has already shown the ability to hit for average and control the strike zone, but there could/should be more power on the horizon. Power is frequently the last attribute to develop and there should be a power spike coming in the near future for the 20-year old Winker. When the power arrives, the Reds could have a very complete hitter on their hands, one who excels in all three components of the slash line and has a very high offensive ceiling.

Winker is an exciting prospect and one with a great deal of projection remaining in his offensive game. If he can tap into it, then he could be the best, most well-rounded hitter the Reds have developed since Joey Votto. My gut feeling is that Winker, if his development breaks right, could be a very special hitter for the Reds. I'm definitely bullish on his future, so for now Winker lands at #3 on the list.