Jake Lamb is a third base prospect in the Arizona Diamondback organization and one who is probably deserving of more respect. And, he'll likely be getting more this time next year if he simply manages to maintain some semblance of his current pace.

Lamb attended the University of Washington where he played three seasons before being drafted by the Arizona Diamondbacks as a junior in the 6th round of the 2012 draft.

Overall, it was a solid baseline of performance, but one lacking in any areas of standout production. MLB teams frequently want to see a carrying tool, something that can really drive a player's value all the way to the majors. Something rare, something scarce. Lamb was more of a well-rounded, jack of all trades type. Case in point, Lamb never managed to earn All Pac 12 Honors, but did wrangle Honorable Mention in all three of his collegiate seasons.

While the lack of a carrying tool may preclude being drafted in the first few rounds, it doesn't completely condemn a prospect's chances. It just means that he probably has a bit more work to do to get there, as he'll need improvement in an area or two to be Major League worthy. However, the well-rounded skills that already serve as his foundation could boost him into an impact player if he makes a key improvement or two. The Diamondbacks immediately got to work trying to make that improvement happen.

Lamb struggled to tap into his power potential when he was at the UW, but the Diamondbacks started working to refine his swing and unlock his power. After never cracking the .500 slugging percentage barrier in college with metal bats, Lamb immediately slugged .539 in 2012 with Pioneer League Missoula and again in 2013 with a .548 mark in a season spent largely with Visalia in high-A ball.

Lamb flashed more power with wood bats in the professional ranks than he did with metal in the collegiate game. And, he continues to demonstrate the ability to hit for average and control the strike zone.


His minor league performance is establishing him as a complete hitter who could be above average in any or all three parts of the slash line. Further, add in above-average defense at the hot corner and Lamb could be the type of player who provides positive value on both sides of the ball.

While the Diamondbacks made refinements to Lamb's swing, it's unclear exactly what they did. However, Lamb has taken a clear step forward offensively and I wonder if they adjusted the way he loaded his hands. His pre-pitch hand position is very high and it's not difficult to envision that position impacting the way he subsequently loaded his hands. If he was loading his hands too high and/or too far back, then he was adding length to his swing by increasing the distance his hands had to travel to get the bat to the point of contact. Further, such a problem could have sapped his power production by making it easier to tie him up on inside pitches and more difficult for him to pull the ball with power.

You can see the high hand position in the following Spring Training photo: 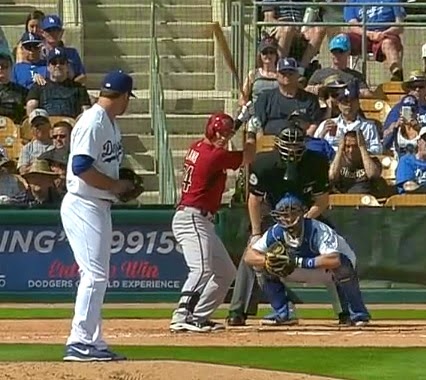 Given that he frequently starts from such a high hand position, proper loading of the hands becomes even more important because it establishes the starting point for his hands in the swing. His stellar minor league performance to date means that his hand load is working, though more advanced pitchers, featuring better velocity and command, might still prove problematic on the inner half of the plate. That bears watching but hasn't materialized yet.

Furthermore, after he loads his hands, Lamb takes a  very short, direct hand path to the point of contact, which serves to tighten up his swing and keep his body compact to maximize the rotational force generated by the firing of the hips in the swing.

Here's a look at his direct path to the pitch: 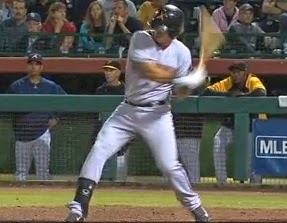 Lamb effectively utilizes "bat lag" in his swing, which is a positive component of the swing that involves the barrel of the bat lagging behind the hands. The longer the hitter can maintain that lag, the more power will be generated by the swing. When the bat emerges from the lag position, the barrel comes around and into the point of contact.

Lamb maintains a small "lag angle" (the angle between the right forearm and the bat) in his swing. Lamb's smaller "lag angle" gives his swing a steeper angle of attack, caused by his higher hand position and a more straight-line (rather than rounded) hand arc path. Due to his higher hand position, Lamb's hands move down towards the ground fairly severely in a straight-line-like direction before somewhat abruptly moving forward in a straight-line-like direction to meet the pitch. This less rounded hand arc path, and the smaller lag angle it creates, helps him generate good power by delaying the release of the barrel in the swing. It remains to be seen if the higher initial hand position and the subsequent steeper angle of attack will be problematic, but early returns are certainly good.

Lamb maintains a nice, compact upper-body position until he reaches a strong point of contact position, as seen below: 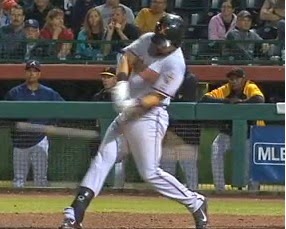 Lamb does a nice job of firming up his front side, which allows the force he generates to rotate around his body and be transferred through the bat to the ball. Overall, his position at the point of contact is strong and balanced and should allow him to sustain his new found ability to drive the ball, though his bat speed still seems something short of plus.

Here's a look at him in action, courtesy of minorleaguebaseball on YouTube:

Given that Lamb has solid swing mechanics and a disciplined approach, his success at the plate will now be be determined by pitch recognition and hand-eye coordination. He needs to identify pitches early and consistently get the barrel of the bat on the pitch. If he can do that, then his swing mechanics will typically take care of the rest.

In the field, Lamb has smooth movements, soft fielding actions, and a strong arm. He should be an asset at an important defensive position, giving him a solid boost to his overall value, as defense rarely slumps.

Based on his well-rounded game, swing mechanics, and the production he is putting up, Lamb seems like a prospect who deserves more hype than he's getting. However, he is bumping up against two common concerns in the prospect evaluation game: "draft position" and "age vs. level."

When a prospect is drafted in a middle round or late, then he constantly has to disprove that initial label. Highly drafted prospects get the benefit of the doubt, later drafted prospects just get the doubt. However, if Lamb continues to hit like he has, then he's going to start climbing prospect lists.

Overall, Lamb seems like an impressive prospect who should be getting better marks than he has to date.

Positives:
1. Lamb has multiple value-drivers (hitting, smart baserunning, and above-average defense)
2. Lamb's hitting profile is that of a disciplined-hitter
3. Lamb's power production is emerging, which is the carrying-tool that he lacked coming out of college

Concerns:
1. Higher hand-position, possible susceptibility to good velocity on the inner half
2. Bat speed seems more solid/average than plus
3. Strikeout rate, while respectable, is still worth watching as he climbs the ladder


In short, it seems like there are multiple avenues that will lead Lamb to a productive MLB career, even though there are still some wrong turns that need to be avoided on his development path. If he continues on his current offensive pace for the rest of 2014, then he'll undoubtedly be taking a significant jump up the rankings on those prospect lists.