"Optimal defensive positioning", well, that's what the Astros call it, everyone else knows it as "defensive shifting", is all the rage these days. And, one hitter who sees a ton of it is Jay Bruce.

The point of "optimal positioning" is to increase the conversion rate on balls-in-play. In theory, if you positioning your infielders where a hitter is more likely to hit the ball, then more plays will be converted into outs. In short, it's a way to reduce a hitter's "batting average on balls in play."

The league-wide increase in pitcher velocity is driving an increase in strikeouts. More strikeouts means fewer balls in play. So, that's one way to reduce offense, simply limit the opposition's ability to put the ball in play. The other way to attack offense is to improve your conversion rate on the remaining balls-in-play.

Increasing pitcher velocity and the increasing use of "optimal positioning" are two reasons why offense is in decline around Major League Baseball. The former reduces the number of balls-in-play, the latter improves the conversion rate on balls-in-play.

Of course, if a hitter manages to poke one the other way for a base hit to beat the shift, then the emotional reaction from fans will be swift. Fans are emotional. Fans are passionate. It's easier for fans to appreciate times when the shift doesn't work than those times when it does. Even so, on some hitters, it's an absolute no-brainer. Unfortunately, Jay Bruce is one such hitter.


Here's a look at Jay Bruce's spray charts, courtesy of BrooksBaseball, for the entire 2012 season, the entire 2013 season, and the first half of 2014, pay particular attention to the green dots: 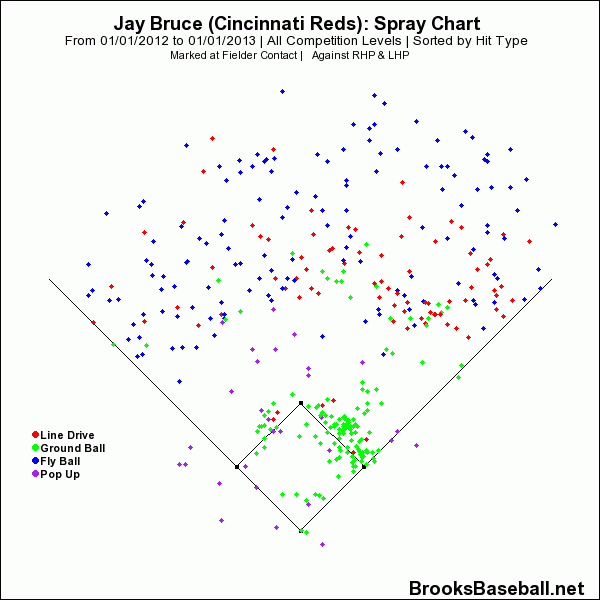 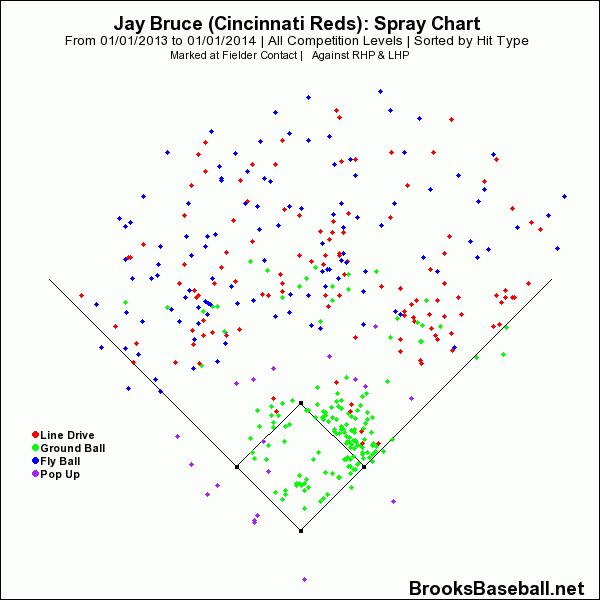 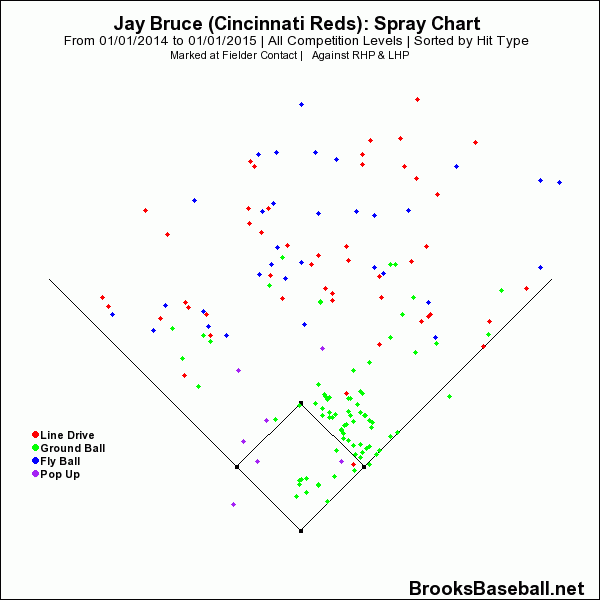 When you see the data laid out like this, it's abundantly clear why teams are constantly shifting on Jay Bruce. And, it's abundantly clear why organizations can brush off fan reaction to a few singles poked the opposite way to beat the shift. Also, you can see why the idea that Jay Bruce can drop a few bunts down the third baseline to encourage teams to stop shifting against him is a complete non-starter.

In fact, judging by the "green dot phenomena" going on in those spray charts, you could argue that teams could be MORE extreme in their shifting on Jay Bruce. The 2014 chart only represents half of the season, but it's eye-popping. Based on that chart, it looks like Jay Bruce has ONLY HIT 6 GROUND BALLS to the left-side of the field so far in 2014.

Why would you position your infielders on the left side of the field if he never hits it over there???

This begs the obvious question: just how significant will the hit be on Jay Bruce's batting-average-on-balls-in-play and, thus, his overall batting line?

There definitely WILL be a hit on his batting average, it's just a question of how BIG. Regardless, the ground balls hit by Jay Bruce are now the low-hanging fruit for any organization willing to implement "optimal positioning", which begs another question: how detrimental will the league-wide use of "optimal positioning" be to Jay Bruce's career?

Baseball is a game of adjustments. It'll be interesting to see if front offices, in response to "optimal positioning", start to place greater and greater value on hitters who use the entire field. If so, that's necessarily a move away from hitters like Jay Bruce.