Robert Stephenson ticks just about every box on the "premier pitching prospect" checklist. He has plus-velocity, strong offspeed pitches, good size, and intelligence. However, to date, the sum total remains less than the sum of the individual parts. It just hasn't all clicked into place to reveal a "#1 starter" caliber pitching prospect.

The lingering problem with Stephenson is command and control, which makes him inconsistent from start-to-start and occasionally from pitch-to-pitch.

In short, Stephenson is not in complete control on the mound.
2014 SEASON
For Robert Stephenson, 2014 was a clear step backward, especially when compared to his "three minor league stop" 2013 season.

The jump to double-A is commonly considered the most difficult in the minor leagues and it certainly gave Stephenson his fair share of trouble. The overall numbers mask some stretches where Stephenson was very, very good. It's something of a plus that it was a season of peaks and valleys rather than consistently underwhelming performance.

On April 5th, Stephenson started the season on a massive peak, posting one of the most dominating performances in all the minors in his first 2014 appearance. It was technically a relief appearance, as Jonathan Broxton started the game to get in some rehab work. Broxton threw the first inning, then Stephenson took care of the next five. In his five innings, Stephenson struck out 11 batters, gave up 1 hit, walked 1, and gave up no runs. So, of the 15 total outs he recorded and 17 batters he faced, 11 were strikeouts. Furthermore, the process looked exactly as dominant as the outcome. It wasn't a fluke. The hitters were simply overwhelmed by Stephenson and frankly had no chance that day.

Unfortunately, the first valley came on April 16th, a game against Montgomery in which he tossed 4.1 innings, gave up 3 hits, 5 runs, and tallied a 3/7 K/BB ratio. Stephenson walked 2 in the first, 3 more in the fourth, and the final 2 in the fifth inning. As easy as he made it look in his first appearance, he made it look equally difficult in this game. He just lost control of the strikezone.

That was the type of season it was for Stephenson, but unfortunately the valleys were a bit more prominent and prevalent than the peaks. One particularly worrisome note, Stephenson had three games in which he walked 7 batters! When his command was off, he missed in every direction, but it seemed like he missed both up and up-and-in to a greater degree.

One thing I've noticed with Stephenson is that he didn't look quite as comfortable or fluid out of the stretch as he did out of the full windup. It was difficult to pinpoint and we'll look at it in greater detail in the pitching mechanics section, but the leg kick seemed inconsistent and the delivery more rushed. After noticing that, I thought it would be interesting to see if the stats supported my observation.

With that in mind, here are Stephenson's walk and strikeout rates for situations where the bases are empty and any situation (Runner on 1st, Bases Loaded, etc) where there is a runner on base for both 2013 and 2014:

Again, there's a decent amount of fog in those numbers, but it does support my observation that he doesn't look as comfortable out of the stretch. The fact that the walks, especially in the 7 walk games, seemed to come in bunches also supports the idea that he simply isn't as comfortable or effective out of the stretch. Once the first batter reaches base via the walk, it's more likely that the batters after him will draw the walk.

While many pitchers, young and old, probably perform better out of the windup, It's something that bears watching in Stephenson's continued development.

Stephenson has good size and athleticism, giving him the look of an impact pitcher.

Here's a look at Stephenson in action for the Pensacola Blue Wahoos, courtesy of RedsMinorLeagues on YouTube:


Stephenson stands tall on the mound before beginning his windup. He starts his windup with a small rocker step, allowing him to unweight his right foot and pivot it down onto the rubber. He then brings his left leg up into the leg kick, which, at apex, involves some coil and bringing his knee all the way up to his chest. The high leg kick allows him generate maximum force and effectively direct that force towards the plate.  At apex, he does a nice job of gathering himself and then utilizes a forward lean to drive to the plate (see photo below). This forward lean is a tilting action that sets the hips in place. Leading with the hip creates leverage by setting a small uphill angle of the shoulders on the way down the mound.

Up to this point, Stephenson's mechanics are very strong. The higher a pitcher loads while remaining in balance, the stronger he will unload. Stephenson is in a very strong position at apex, but his mechanics after apex aren't quite as strong.

The first concern on Stephenson is the minimal differential between his hip rotation and shoulder rotation. The photo below seems to show the maximum differential in his delivery, by and large the hips and shoulder unwind at similar rates. The lack of differential limits the efficiency of the kinetic chain in both creating force and transferring that force to the baseball. The force that bleeds out of the kinetic chain due to this inefficiency has to subsequently be made up by the arm, which then bears an increased burden.

Originally I thought a longer stride would help Stephenson get better and fuller hip rotation, but his current stride length is probably the longest that his athleticism will allow him to effectively utilize, especially in light of my next concern: Extension/Follow-through.

Stephenson doesn't seem to get his upper body completely out over his stride leg. The causes and/or effects of which include not having sufficient athleticism to utilize his current stride length, an upper body that remains a bit upright in the delivery, a strange glove-side hand movement, and occasional difficulty in finishing off his pitches.


Proper glove-side action involves a number of components, including closing the glove to give the pitcher a firm side to work against in throwing the ball, the glove turning and becoming suspended as the chest thrusts towards it, and the glove finishing in "the box", which is the area between the sternum and the armpit and from the belly button to the waist. In the below photo on the left, Stephenson is close to having his glove in the box, but then drops it down and under as his pitching arm crosses over (as seen in the photo to the right). 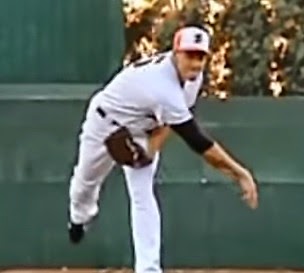 Ideally, the throwing-side and glove-side should, by mirroring and counterbalancing each other, load the arm for pitching. It's possible that that is occurring here with Stephenson, but it's also possible that his unusual glove movement blocks him off from getting his upper body more effectively out over his stride leg. That might account for his occasional misses up-and-out of the strikezone.

Stephenson's motion out of the stretch frequently utilizes a lower, quicker leg kick that gives him less time to gather himself at apex before driving to the plate. The lower load means that his unload will be weaker, which arguably means less momentum to drive his upper body out over his stride leg. The more difficulty he has in getting out over the stride leg, the more difficult it will be for him to effectively finish his pitches, resulting in more misses up out of the zone and and up-and-in to the hitter.

Overall, Stephenson has solid pitching mechanics, which is important to note because sometimes simply mentioning potential red flags can overshadow the overall quality of the mechanics. So, to cleanse the palate, here's a slo-mo view of Stephenson pitching for the Bakersfield Blaze in 2013, courtesy of "Big League Futures" on YouTube:

Stephenson features largely a 3-pitch mix. A mid-90s fastball that can touch 100 mph, but also seems relatively straight. A plus power-curveball that has big, sharp break, which works as both a chase pitch and an in-the-zone pitch. Finally, Stephenson works with an average changeup.

Stephenson's repertoire is good enough to project him at the top of an MLB rotation. Of course, he'll need to be able to command it, which is especially true since his fastball relies on velocity rather than movement.

I don't love the movement on his fastball or changeup, so the ability to hit his spots will be paramount. In fact, it makes me wonder if he'll eventually need to evolve at the major league level by adding a 2-seam fastball. That said, not many hitters have an answer for a well-located 95-mph fastball, but if it drifts into hitter happy zones, then he'll wish that it had a bit more movement to it.

Stephenson has the attributes to be a #1 starting pitcher at the MLB level. His upside is undeniable. However, I've never had him ranked him as the #1 overall prospect on my lists. All of the individual parts of his game are very impressive, but I've had just enough minor questions about each area to make me downgrade him. And, to date, he hasn't yet figured out how to pull together those individual parts in such a way as to become a complete pitcher. Still, the potential is undeniable and if he refines his command, continues to polish his changeup, and improves his performance when working out of the stretch, then it's easy to envision him becoming an elite starting pitcher.

Stephenson has some question marks to his game, but his attributes and upside land him comfortably in the #2 slot on the list.