This offseason, the Reds decided to address the impending departure of three-fifths of their starting rotation after the 2015 season. They did so largely by trading away Mat Latos, whose value has fallen due to an injury plagued 2014 season and declining fastball velocity, to the Miami Marlins. Not as many pundits as I would have expected are making the connection between those two factors, but it seems highly likely that they are interrelated. Regardless, the central piece coming back to the Reds in the Latos deal was Anthony DeSclafani.

Right out of the chute, DeSclafani takes the title for worst name on the 40-man roster. A brutal blend of consonants and dissonance. Fortunately, others in his life must have struggled with it, because someone bestowed the nickname of "Disco" upon him.

The general pundit consensus is that the return for the Reds in the Mat Latos deal was rather light. Disco, as the key piece of that return, will have a chance to prove them wrong. There are certainly a number of things to really like about Anthony DeSclafani, even if he still needs to conquer a few lingering issues before he evolves into a viable MLB starting pitcher.

Disco spent three years at the University of Florida, where he split time between the rotation and the bullpen. Overall, his collegiate career fell somewhat short of stellar:


The peripheral stats were more encouraging than the overall stats, but it wasn't an elite performance level by any means. It's also interesting to note, since the Reds have tabbed him an early favorite for a rotation spot, that he spent more time working out of the bullpen in college than the rotation. Still, his performance combined with his pitching tools was enough for the Blue Jays to draft him with the 199th overall pick in the 6th round of the 2011 draft.

Disco was eventually dealt to the Marlins in the Reyes/Buehrle/J.Johnson deal and then on over to the Reds in the Mat Latos trade. He has bounced around quite a bit in his young professional career, including stops at three different levels in 2014.


2014 SEASON
Disco split time between double-A, triple-A, and the majors in 2014. The initial assignment to double-A was a return engagement and he handled it well, showing a nice blend of walks and strikeouts that would be the defining positive characteristic of his season.

The walk and whiff rates are what stand out, but, in light of his largely two-pitch mix, it's worth wondering how well those rates will translate to the majors. It's possible that he gets away with leaning heavily on the fastball/slider combo when facing younger hitters, but that he'll struggle to maintain that level of success when facing big league hitters on a consistent basis.

To find out, I went back and watched all five of Disco's starts for the Marlins in 2014. I watched those starts cold, without any prior research, because I wanted a clean first impression.
Disco's first start was both his MLB debut and his best effort. He faced the Dodgers on May 14 and tossed 6.0 innings of 2 run ball, allowing 7 hits and posting a 7/1 K/BB ratio. His debut was noteworthy for two reasons: (1) it included his best velocity as a starting pitcher, and (2) with the exception of a single changeup, he relied on only two pitches (fastball/slider).
I don't know if his veins were coursing with adrenaline as a result of making his Major League debut, but his fastball was popping the mitt, averaging 94.4 mph. That level of velocity, when coupled with an above-average slider, was enough to confound the Dodgers. The one changeup that he threw was not a good one, getting hammered by Yasiel Puig for a double. Not only was that pitch outcome bad, but the arm action he used on the changeup looked materially different than the one he used on his fastball and slider. So, the deception was poor, which isn't a good sign going forward.
After his debut start, the results were decidedly poor and the fastball velocity a notch slower, sitting more 91/92/93 than 93/94/95. He gave up, respectively, 5, 4, 7, and finally 2 runs in an abbreviated 3.0 inning start that he had to depart after getting plunked by a comebacker. After those five starts, he returned later in the year to work out of the bullpen. So, what can we glean from those starts?
Well, first and foremost, his fastball is vastly more interesting and effective when it sits 93/94/95 than when it sits 91/92/93. Unfortunately, the latter is more common than the former. Second, his changeup isn't ready for prime time. Third, there might have been a smattering of bad luck obscuring a true performance level, as his BABIP and Strand Rate were both worse than might have reasonably been expected. In short, he gave up more hits than normal and those hits were bunched in more damaging clusters than expected. So, he has that going for him. Finally, his control could become a real value-driver for DeSclafani, as he has the ability to limit the number of baserunners he allows via the free pass.

As for pitching mechanics, Disco's are strong without any obvious red flags. His balance and tempo remain strong throughout. His leg kick comes up well past parallel at the apex and he stays over the rubber to effectively gather himself before driving to the plate. 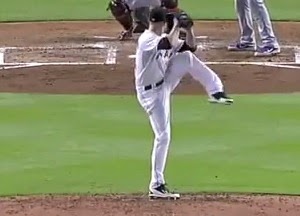 The defining characteristic of his mechanics is his stride. After he unpacks his leg kick from the apex and strides forward, he actually straightens out his front leg, leaving him in an unusual position.


While the stiff stride leg looks unusual, it serves to effectively lengthen his stride, which can increase the force generated by the kinetic chain and allow for easier and more complete clearing of the hips to transfer that force to the baseball. For Disco, straightening the front leg seems to serve the same purpose, namely maximizing the stride length, as Tim Lincecum's "step over the banana peel" move at the very end of his stride.
In the photos above, his back leg is flexed, while his stride leg is straight. As he continues to drive to the plate, it reverses, as his back leg straightens, while the front leg flexes. In the photos below, you can see this happen, giving him a longer stride and the appearance of almost jumping off the mound toward the plate.

I'm a big proponent of a lengthy stride, or at least a stride as long as a pitcher can comfortably utilize, as it has real kinetic chain benefits. However, one of the things I like most about the longer stride is that it allows for the possibility of a greater differential between hip rotation and shoulder rotation. A delayed shoulder rotation allows the pitcher to more effectively throw with his entire body, which reduces stress on the pitching arm. Disco has a good differential (photo below), even if it isn't quite all it could be. As a result, his kinetic chain is effective, but it isn't quite as efficient as it might be, potentially reducing the generation of force and/or increasing the effort required to generate that force.


Overall, I like Disco's mechanics, which are strong, but for a pitcher whose stuff is straddling the line between starter and reliever, any added or lost force might make a substantial difference in career path.
As for his arm action, he throws from a high three-quarter arm slot, maintains good position relative to his shoulder, gets the arm up into proper throwing position at foot strike, uses good pronation, and has a solid deceleration phase. All of which should work to minimize his injury risk.
Here's a look at him in action, courtesy of MLBProspectPortal on YouTube:


I like Disco from a pitching mechanics point of view. His fastball, at least when it averages 94.1 mph, is a legitimate weapon and his slider can be a plus-pitch, but his changeup remains a real work in progress.
If the velocity remains inconsistent on his fastball and the changeup remains little utilized and ineffective when it is, then it's difficult to see how Disco will find consistent success in the starting rotation. And, it's difficult to see how the Reds can win this trade if he's relegated to the bullpen.
The real problem is that while Disco's fastball and slider combo might be enough for him to consistently handle righthanded hitters, it's much harder to see how he can effectively neutralize lefties. His slider is a good pitch, but he doesn't throw it with enough power to utilize it as a back-foot slider to lefties. The slider averages 81.7 mph, which makes it difficult to generate enough depth and movement to break it down-and-in under the swings of lefties. During his starts, I saw him back-foot only one slider, an 83-mph pitch that struck Anthony Rizzo out swinging. But, by and large, it's a pitch that's likely to be more effective against righties, leaving him without an out-pitch to lefties.
The numbers bear this out, as Disco posted the following splits in 2014 (obviously, small sample size caveats apply):

vs R: .273/.301/.409/.710
vs L: .333/.362/.530/.893
The performance against righties certainly isn't great, but the performance against lefties is truly ugly. In light of his limited repertoire and struggles against lefties, a move to the bullpen might be inevitable. He might be able to stave off such a move if he can either significantly improve his changeup or increase his fastball velocity, but neither seems to be lurking on the immediate horizon.

Clearly, Disco was aware of the problem, as he was experimenting with a curveball in the Arizona Fall League and early reports were promising. Granted, it was a small sample size against varying levels of hitters, but it's possible that the curveball will replace the changeup in his arsenal and give him a more effective offspeed pitch to use against lefties. Odd as it may sound, curveballs frequently have reverse platoon-splits, so he could deploy it against lefthanded hitters. So, maybe it's this new curveball that will ultimately unlock Disco's potential and make him a viable MLB starting pitcher.

The overarching goal of the Mat Latos trade was to swap a pitcher with one year of control for players under multiple years of control. Part and parcel of such a trade is trading experience for inexperience. Fortunately, DeSclafani still has time to develop, but the Reds seem ready to toss him right into the fire, as he's penciled into the rotation for 2015. However, he'll need to find a way to take his performance level up a notch in 2015 if he's going to find consistent success in the rotation.

Disco has strong mechanics, but unless he has more and better stuff in his arsenal, it's difficult to see him emerging as an impact starting pitcher. His current arsenal would probably make him a viable reliever, but the Reds obviously have their sights set higher than that.

There are a lot of things to like about DeSclafani, including clean mechanics, good command, and enough stuff to generate strikeouts at a good clip. Further, he's still young enough to take the needed step forward and he'll get that chance in 2015. For now, he clocks in at #7 on the list.
Posted by Lark11 at 8:45 PM