The key to the Reds off-season is Max Kepler.

That simple fact makes the following blurb rather exciting:

Twins general manager Terry Ryan said Wednesday that the plan is for Miguel Sano to play right field in 2016.

Sano mostly served as the designated hitter during his rookie season, but the Twins plan to use the newly-signed Byung-ho Park there in 2016. There has been some speculation that the Twins would trade Trevor Plouffe to make room for Sano at third base, but Ryan said Wednesday that they have talked to the young slugger about playing the outfield and that he's on board with the plan. Byron Buxton is penciled in as the starting center fielder while Eddie Rosario will play left.Dec 2 - 1:14 PM

Just to recap, the Twins are planning on filling out two-thirds of their outfield with potential superstars in Byron Buxton and Miguel Sano. That doesn't leave much room for Max Kepler, especially since face of the franchise Joe Mauer is manning first base and new Korean acquisition Byung-ho Park holding down the DH spot. Add in the fact that the Twins have been impressed enough by Eddie Rosario to hand him the left field job and if you squint hard enough then Max Kepler starts to look like a surplus asset for the Twins.

In short, it's starting to feel like the music has stopped and Kepler is still looking for a chair. Fortunately, the Reds have chairs for days and days. It feels like there might be a legitimate fit here. It doesn't hurt that the Twins and Reds are passing each other on the win-curve, moving in opposite directions. The Twins are ready to add pieces to put them over the top, while the Reds are hoping to slough off win-now pieces for future value. The Reds and Twins lineup nicely for a trade.

I first noticed Kepler in the 2014 Arizona Fall League, just prior to the 2015 season, and wrote a comment about what I saw on John Sickels' MinorLeagueBall website:


I’ve seen Kepler in a few AFL games this year and came away really impressed with how calm he is at the plate. He seems very comfortable tracking pitches, to the point that it seems like he slows the game down a bit. I was surprised, because I was expecting him to be a bit more raw in his approach, as I would imagine a player born and raised in Germany would have seen far fewer total pitches in his amateur career than the comparable American born prospect.

It remains to be seen whether he has the swing mechanics to develop into an impact hitter, but he seems like the type of hitter of who can recognize pitches, generate count-leverage, and be disciplined enough to draw a walk. Now, he just needs to learn how to drive the ball when he works the count in his favor.


Maybe he never pans out, but he’s more interesting than I thought he’d be.

Watching Kepler, his comfort level at the plate is astounding. He seems to identify and dismiss pitches faster than his contemporaries. Knowing in advance what the pitches are going to do gives him the appearance of owning the batter's box. Not only is his pitch recognition superb, but he uses it in conjunction with a very patient and disciplined approach. In his first 7 MLB plate appearances in 2015, Kepler saw a total of 37 pitches, good for a 5.3 pitches per PA. Obviously, that's an absurd degree of patience that will regress over more PAs, but that kind of patience in his first MLB stint is fairly remarkable. But, he's much more than just a patient approach.

In 2015, interestingly enough, he learned how to drive the ball after working the count in his favor. In essence, his swing mechanics caught up to his plate approach, making him a complete and dangerous hitter.

There is a tremendous amount to like about Kepler's swing mechanics.

In these photos, you can see how he loads the back shoulder, creating real differential between the rotation of the hips and shoulders. His hips fire first before the shoulders rotate open. He stays compact and upright to maximum the rotational force generated by his body. A key to high level hitting is generating maximum force and delivering it to the point of contact. Kepler's swing mechanics generate the force and his hand-eye coordination helps him deliver it to the point of contact. 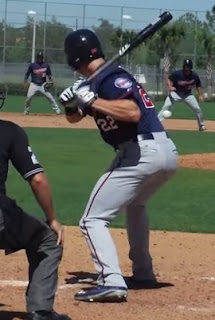 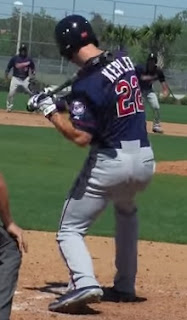 I already loved Kepler's pitch recognition and disciplined plate approach. Now, I'm a big fan of his swing mechanics, too. It's all coming together.

For me, I'd do what it takes to land Max Kepler. If the Reds want to shallow out this down cycle, then adding Max Kepler would go a long ways towards accomplishing just that. If you add Max Kepler to Jesse Winker and Joey Votto, then fully 1/3 of your MLB lineup will be made up of hitters with plus-plus pitch recognition skill and very disciplined approaches. These are the types of hitters the Reds need. These are the offensive profiles that they should target.

Over the next half-decade or more, the Reds will have to face a Cubs team featuring Anthony Rizzo, Kris Bryant, Kyle Schwarber, Addison Russell, and more. The Cards are never short on disciplined, professional hitters, in fact it's practically part of The Cardinal Way. It would serve the Reds well to build their own core of impact, disciplined hitters to keep pace.

The Reds have a lot of talent (Aroldis, Frazier, Bruce, etc) to dangle in front of those teams looking to make a hot stove splash. If they play their cards right, then they could land the type of talent they need and ensure that the down cycle they are entering is as short as possible.

Max Kepler is the key.