Dunn and New Approach at the Plate 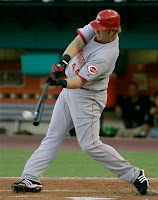 (written at the end of April)

Well, I think it's time to seriously worry about Adam Dunn. I thought it was wise to trade Dunn this past offseason, because I subscribe to the theory that young players who survive solely on Old Player Skills (Power and Patience) tend to peak and decline earlier than young players who utilize a myriad of skills. Intuitively makes sense, as if you start at the bottom of the acceptable spectrum for speed and defense, then when you lose a step due to age you immediately fall below the acceptable floor for a Major Leaguer player. It's going to be much easier for Jose Reyes to continue to be successful when he loses a step, then it is for Adam Dunn.

I still believe that this is a crucial year for Dunn's career, as if he declines yet again then I think it's obvious that he's on the down slope of his career. He really needs a bounce back season, but at this point I'm not encouraged.

At this point, I think it's possible that Dunn peaked in 2004 and is declining. If he is in decline, then he may have lost a bit of bat speed. And, seeing his production decline, I think he has begun to change his approach in an attempt to offset the slower bat speed.

Both his on base skills and his power have been in decline.

Now granted, 2007 has a long way to go, but I'm not overly impressed with what I've seen from Dunn thus far. We've heard a lot about Dunn's new physique and the approach Brook Jacoby helped him develop at the plate. Thus far, I don't think the results are very encouraging. It seems like Dunn is getting more aggressive in an attempt to increase his batting average, but in doing so he's losing the power and patience that make him a special hitter.

There is a great new feature at BaseballReference that provides all the pitch data for each player and Adam Dunn's is fairly interesting. It provides clues to the type of approach that Dunn is using in each At Bat.

Whether it's because of a slowing bat or a new approach, that seems to be what Dunn is doing. Here's a breakdown of Dunn's ABs by pitches.

He is taking fewer called strikes (31% --> 28%) and getting more swinging strikes (19% --> 24%). So, despite the complaints about Dunn not swinging often enough, he's actually swinging much more often.

Year: % Pitches Swung At / % Time Contact made when Swinging

Dunn is swinging at more pitches (39% --> 42%), but making contact much less frequently (72%-->66%). And, sadly, his new approach isn't helping him reduce his strikeout rate. He is putting himself in fewer good hitting counts, because he is getting more aggressive. He seems to be flailing about in an attempt to make up for his declining production.

He's also swinging at more first pitches than in years past:

Year: % of Time Swinging at First Pitch of PA

So, again, he's getting more aggressive and moving the conclusion of the At Bat up earlier in the count.

It seems like the "new Adam Dunn" has managed to increase his average, but he is seeing a decline in plate discipline, power, and strikeouts. And, if the strikeouts are increasing, then it seems unlikely that he'll be able to maintain any gains in batting average.

To me, it seems that if Dunn has to start swinging more often because his production is in decline, then it's the beginning of the end. If he can't wait for his pitch and crush it when he gets it, then he's not going to be a very valuable player. To me, it seems like Dunn is at the absolute bottom of the acceptable spectrum for making contact. If his contact rate declines even a little bit, then he may cease to be an effective ballplayer and he lacks any other baseball skills to offset the decrease.

Dunn seems to be trying to force a conclusion earlier in the AB, which could reduce strikeouts, but will also likely decrease his power and walk rate. Whether it's just a new approach or an attempt to make up for a slowing bat, something is changing his approach. And, given his limited skill set, any drastic change in approach at the plate seems ill advised. His strengths are diminishing and his weaknesses aren't improving much.

Dunn may be able to increase his batting average, but if it comes at the cost of his power and patience, then the price is just too high. It's still early in 2007, but he needs to take a big step forward this year, not a step backward.

If he declines again this year, then this may be the beginning of the end for Dunn.