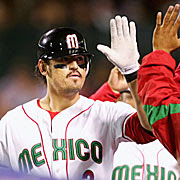 Well, the Reds made their long anticipated splash before the trade deadline, but it came in the form that few could have expected. The Reds acquired Jorge Cantu, Shaun Cumberland, and cash for Brian Shackelford, Calvin Medlock, and future considerations.

Oddly enough, I like the deal itself more than I like Jorge Cantu. The Reds acquired a hitter with some upside, but gave up little of note to do so. Shackelford spent some time in the majors, but had some legal trouble last year and never seemed to regain his composure. Medlock had a very nice year at AA, but doesn't have the kind of upside that may make the Reds regret giving him up.

This type of deal is where Reds GM Wayne Krivsky seems to thrive. These low risk/high reward deals have been very good to Wayne Krivsky. He has acquired several undervalued players who have paid huge dividends. Krivsky acquired Brandon Phillips, Josh Hamilton, and David Ross at a very low cost. These deals cost little to make, but have the potential for a substantial payoff. The acquisition of Jorge Cantu is just such a deal.

While I like the nature and type of deal, I'm not wild about Jorge Cantu. Cantu has more potential than the players the Reds gave up, but he's far from certain to be a viable MLB player. He's the type of player that the Reds really don't need. He is an undisciplined hitter who lacks speed and is a liability with the glove.

Cantu's glove prevents him from being a viable option in the middle of the infield, while his bat prevents him from being a viable option at a corner infield spot. As such, he's really nothing more than a bench player and a spot starter, especially when you consider that the Reds have top prospect Joey Votto as the future at first and Brandon Phillips entrenched at 2b. Accommodating Cantu as a starter would require some heavy duty roster reworking and potentially playing players out of position. If the Reds envision Cantu as being a utlity player and bat off the bench, then this is a solid acquisition.

Much is made of Cantu's performance in 2005, as he hit 28 homeruns and had 117 RBI. That said, he also posted a less than inspiring line of .286/.311/.497/.808. His counting stats were good that season, but his ratios weren't great. Not to mention, he had a strikeout to walk ratio of 83/19. That kind of free swinging approach can be exploited by pitchers as they become more familiar with a hitter and word of his weaknesses spreads around the league.

Earlier this year, Cantu lost his roster spot on the Devil Rays. In the process, he didn't comport himself very well. He openly campaigned for a trade and displayed a generally poor attitude. Rather than work hard to improve his game and reclaim his spot at the Major League level, Cantu instead seemed to sulk and pout.

At AAA Durham this year, Cantu hit a paltry .244/.303/.356/.659, indicative of a poor skillset, a poor attitude, or both. Maybe the change of scenery will be just what he needs, but at this point his performance and attitude are cause for concern.

Krivsky seems to be much more adept at trades that bringing in undervalued talent than he is at executing winning trades that involve giving up value. Krivsky's stated asking price for Adam Dunn, a proven pitcher, an infielder, and a top prospect, did little more than scare off potential trading partners. Krivsky seems to be better at spotting undervalued talent than he is at understanding the market valuation for established players.

However, time will tell if the acquisition of the undervalued Jorge Cantu will be yet another winner for Krivsky. At the very least, Cantu should be a nice bat off the bench, but he'll need to prove that he is deserving before being given a more substantial role.
Posted by Lark11 at 11:04 PM