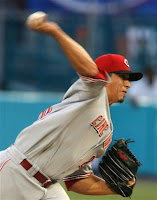 Well, the Reds traded Kyle Lohse to the Phillies for LHP Matt Maloney. To me, that doesn't seem like a good deal at first blush, but if we dig deeper it may actually be the best deal we could have cut. While originally I had hoped to see Lohse net compensatory draft picks for the Reds after leaving via free agency, but I'm no longer sure that would have been possible.

Here is Maloney's scouting report from the 2007 Baseball America Prospect Handbook, in which he ranked #9:

Maloney was worn out from pitching Mississippi to the NCAA super regionals when he turned pro in 2005, so the Phillies didn't see him at his best until 2006. His best was very good, as he was named South Atlantic League pitcher of the year after leading the circuit in wins, innings, and strikeouts while finishing second in ERA. Maloney attacks hitters by throwing four pitchs for strikes. His stuff is average across the board, but his advanced feel makes it play up, and he creates good deception with his easily repeatable delivery. His 86-88 mph sinker is his best pitch because of its late movement. His changeup isn't far behind and he'll throw it in any count. He also has an 11-to-5 curveball and a slider. Maloney's lack of velocity leaves him with little margin for error, and his secondary pitches need work to translate at the upper levels. his curveball has good downward spiral but can flatten out at times, and his slider needs to be tighter and harder if it's going to remain in his arsenal. On the high end, Maloney could be a No.4 starter. Without better breaking stuff, he could be a middle reliever. Considering his savvy and that he'll be 23 in 2007, he could skip a level and head straight to Double-A.

At the very least, he's a southpaw whose best pitch is his sinker and also features a nice change-up. He's not great, but not a bad return on Lohse. Unfortunately, given that Lohse did not even qualify as a type C pitcher in 2006, it hardly seems likely that he'll be qualified as a type A or B free agent after this year. So, compensatory picks may not have been a realistic option after all. Given the choice between letting Lohse walk for nothing and adding Maloney, it seems like a rather nice trade for the Reds.

Here is an explanation from Baseball America of the rules for ranking players for Free Agent Compensation:

Every offseason, the Elias Sports Bureau compiles rankings of all major league players, based on the previous two years' stats. The players are ranked by position groups: catchers; designated hitters, first basemen and outfielders; second basemen, third basemen and shortstops; starting pitchers; and relief pitchers. The players are then broken down into Type A, Type B and unranked free agents.

When a team loses a free agent who is ranked in one of the two categories, it receives compensation as follows (if and only if it offered the free agent arbitration before he signed with his new team):

If a team doesn't offer arbitration to its free agent, it gets nothing when he signs with another team. This brings up the next question of why don't the teams always offer arbitration? The answer is, they might simply be afraid he'll accept it. It's a gamble some teams aren't willing to take, even if it seems likely the player is heading out of town.


That ranking was based on his 2005 and 2006 seasons, in which his total combined stats were:

Those stats are eerily similar to his 2005 & 2006 stats and a case could be made that they are a bit worse. In order for the Reds to have received compensatory picks for Lohse, he would have to climb up around 15 places in the 2007 rankings, which would have made him a type B pitcher. However, his combined 2007 & 2006 stats do not represent a substantial improvement over his combined 2006 & 2005 stats, so he may not move up high enough to warrant compensatory picks. Anything less than an improvement of ~15 spots in the rankings would result in him being classified as a type C player or not even ranked at all, and, of course, neither of those two designations would have garnered the Reds compensatory picks.

Basically, the Reds made a calculated gamble that Lohse wouldn't have brought in any draft picks after the season, so they made the only logical decision. They brought in value rather than end up with nothing after the season. Given that Lohse's agent is Scott Boras, there is very little chance the Reds would be able to re-sign him, even if they wanted to do so. So, all in all, it seems like another solid move by the Reds, as "something" is still more valuable than "nothing".
Posted by Lark11 at 8:04 PM