Can Chris Dickerson Possibly be for Real?

While Chris Dickerson continues to have the biggest Whiskey Tango Foxtrot season in all of baseball, it may be time for us to get a bit of perspective on his chances for continued success. While I didn't rank Dickerson among the top 25 Reds prospects this past offseason, I'm sure that he has exceeded the expectations of everyone who isn't Chris Dickerson's mother. I'd love to believe that this is the real Chris Dickerson, but unless he's Babe Ruth reincarnated, then he's due for a regression. Of course, the $25,000 question is just how far will he fall? 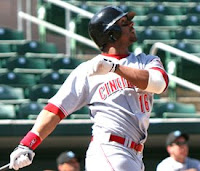 Unfortunately, we wasted a ton of playing time on Corey Patterson, which is time that should have been given to Dickerson. At this point, I still don't think we can be sure that he actually is more than a 4th outfielder.

If we had given him a longer look, then we'd have a better idea of what we've got. At this point, pitchers haven't gotten a book on Dickerson yet, so he could still be enjoying the fruits of anonymity. Sadly, the bumbling ways of the Reds front office likely means that we won't get to see if Dickerson can adapt to the adjustments the pitchers are inevitably going to make.

So far, Dickerson has been outstanding, but there are some evident "Red" flags. Dickerson is striking out once every 3.2 ABs, his BABIP is an unsustainable .420, his AB/HR is 13.7, and his HR/FB rate is likely unsustainable at 22.2%.

For comparison, over his career, Adam Dunn strikes out once every 3.1 ABs, has an AB/HR of 13.9, and has an HR/FB of 22.8%, so Dickerson is currently hitting a homer at a rate better than Dunn and is seeing a higher percentage of his flyballs leave the yard than Adam Dunn.

I love what Dickerson is doing, but it's probably wise to remain somewhat skeptical. He's performing at such a high level right now that he can afford to regress, but I think we are all fooling ourselves if we don't expect a regression. He's very unlikely to hit .300 over any appreciable amount of time when he is striking out that much. And, I think it's clear to everyone that he isn't going to continue hitting homeruns at a "Dunn-ian" clip.

While Dickerson seems to have turned the corner and made significant strides from his minor league level of performance, I'm still taking a bit of a wait and see approach. Kevin Maas looked pretty good at one point, too. I just wish the Reds had had the foresight to "see" about Dickerson much earlier in the season.

Still, even if Dickerson isn't the next Babe Ruth, he can still afford to slide quite a ways from his current level of offensive production and be a productive big leaguer. His tremendous late count hitting and on-base skills, very strong defense, and good speed means that he doesn't need to hit all that much to be an intriguing player. He's off to a good start to his MLB career and if he continues to establish himself as a solid hitter than he could really help offset the loss of Adam Dunn in 2009, but (WARNING: Understatement Alert!!) despite all that he's unlikely to continue to produce at his current level over any extended period of time.