Baseball Deity for a Day

Well, after a long season of highs and lows for our Redlegs (we'll take a look at those later), I've decided to focus on some changes that I would make if I was the all-knowing, all-powerful baseball deity.

Baseball is a great, great game, but I think it could be better with a tweak or two or, in this case, nine. And, without further ado, here is my 9 step plan to a better national pastime:

Baseball is a timeless game, but breaking up the flow to have the umps call for instant replay just doesn't work. Also, one has to wonder why MLB choose to phase it in midseason, which would seem to raise fairness questions. Not to mention, baseball is almost a game of failure. Great hitters fail 7 out of 10 times, pitchers frequently miss on location, baserunners get caught stealing, fielders make errors, and umpires miss calls.

When the rest of participants eliminate errors from their games, then we can hold the umpires to a mistake free standard. Mistakes, by players and umpires, are part of the legacy and tapestry of the game. After all, was the game REALLY harmed or diminished because Don Denkinger blew the call in the 1985 World Series?

2) League Division Series Will Be Increased to 7-games

Right now, it hardly seems fair to settle a season that runs 6 months and 162 games with a measly 5 game series. In a five game series, one bad bounce or one ill-timed injury and an entire season of hard work and effort is down the tubes. The point of the playoffs, by and large, is to crown the best team the champ. From where I stand, it is much more likely to happen in a 7 game set than a 5 game set.

Now, this isn't QUITE as easy as it seems. As it stands, the season already comes close to running into November, which is problematic for the cold weather organizations. It hardly seems realistic to start the season earlier, as spring training begins in mid-February with pitchers and catchers and the regular season kicks off right around April 1st.

In addition, it's not really realistic to shorten the season, as the owners aren't going to want to lose the additional revenue from the lost games. So, how do we add potentially two more games without running the World Series into November?

3) Scheduled Double Headers Once a Month

Yes, I think it's time for baseball to embrace the beauty and fun of the doubleheader. For the hardcore baseball fan, is there anything better than a sun soaked doubleheader on a summer Saturday?

By having one scheduled doubleheader a month, the season could be shortened up enough to allow for a 7-game League Division Series. Now, one final note, I would expect the scheduled doubleheader to cost only the single game price. None of the cheap, you have to buy tickets to for each game, so the owners WOULD have to tighten their belts a bit, but at least they'd still get the concession revenue for both games. Still, it improves the experience of going to regular season games and shortens up the season enough to allow for a better, more fair playoff structure.

This is a simple tweak, but a necessary one. The World Series was recently changed to begin on a Tuesday night, so as to maximize the revenue. It's time to put Game 1 back where it belongs...on a Saturday. However, I would make one additional change to the schedule.

As it stands, it is difficult to schedule night games that work well on both the East Coast and West Coast. During the week, the games have to be late enough to allow the fans on the West Coast to get home from work, but early enough to allow the fans on the East Coast to get to bed at a reasonable hour. However, this problem doesn't (or, at least shouldn't) apply to weekend games.

It seems like an obvious solution to showcase the championship in daylight on the weekends. I understand the desire to play the Series in primetime for revenue reasons, but there are other factors to consider. The most obvious is that the younger fans, who are vital to the future of the game, can't stay up late enough to watch the game (in truth, a lot of hard working adults can't either). So, why not play the weekend games during the day to allow everyone to enjoy the game at a reasonable hour?

It's a simple fix that could improve the World Series experience for fans of all ages and showcase the game in the bright sunlight.

5) Cut Down on Commercials During the World Series 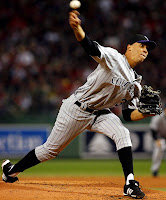 This is more pet peeve than anything else. The games in the last World Series seemed to stretch on into eternity. The Red Sox v. Rockies series was compelling, though a bit one sided, but it was difficult to even watch the games due to the length of the telecasts. A large part of the length was the sheer number of commercials wedge into every break. Time to speed up the game!

6) Eliminate the Wild Card and the Central Division

Personally, I think going back to the days of the West and East divisions would be for the best. And, while I'm advocating the elimination of the Wild Card, I would still want to have 8 total teams in the postseason. However, I'd want to have the two top teams from each division advance, which I think could reinvigorate the long extinct pennant race while not reducing the number of teams that make the postseason.

Draft pick compensation was a good idea at the time, but by now it is doing more harm than good. The main reason why Major League Baseball cannot implement signing bonus restrictions on draftees is due to compensatory draft picks. The signing bonus demands also prevent smaller market organizations from drafting some of the players they want. 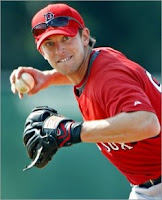 The MLB Player's Association is an organization that was created to represent the best interests of Major League Baseball players. Drafted amateur players and minor league players are NOT MLB players, so they are not covered by the MLBPA. The only reason that the MLBPA can fight off the attempts of MLB to impose signing bonus limits is because an arbitrator ruled that draft pick compensation affected the interests of MLB players. So, if MLB eliminated draft pick compensation, then it follows that MLBPA would no longer have an interest to protect and MLB could impose whatever salary structure they desired on draft picks. This would enable smaller market teams to select whatever player they want without worrying about signing bonus demands. The point of the MLB draft is to distribute talent and impose a degree of parity to the system.

Another problem with draft pick compensation is that it has been completely factored into the cost of doing business by the marketplace. At one time, it was a weapon for small market teams to rebuild their farm system at the expense of high revenue organizations. However, the Boston Red Sox have co-opted this philosophy and used it to build an organization with a $100M farm system. At this point, the Red Sox have built a budding dynasty, as they are using Billy Beane's Moneyball philosophy and supported it with a higher revenue stream. At this point, it is difficult to imagine smaller market teams being able to compete with a $100M farm system.

Personally, I don't like the idea of a salary cap. I never have and likely never will. It seems to be anti-capitalistic and far too artificial. Granted, professional sports leagues are anti-competitive by nature, as they require cooperation among the competitors for the league to survive. However, I'm just not a fan of the salary cap, but there are other things that can be done.

That's why I'd allow for increased revenue sharing among the teams, so the wealth would be redistributed a bit more. More equality in base revenue would put the teams on a more even playing field. However, it's not realistic to expect other teams to share their revenue if small market owners are just going to pocket the revenue, rather than plow it back into their organizations. So, we need a salary floor to ensure that revenue sharing is spent to improve the small market organizations.

While it would come at the expense of the amateur players, the changes would provide roughly equal benefits and burdens to both the players and owners. And, to top it all off, there would be an improved product on the field. 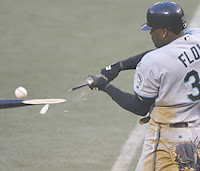 Sadly, it seems inevitable that someone is going to get seriously hurt by the shards of a shattered bat. The barrells on some of these broken bats are sent flying in all directions with terrifying speed. Unless something is done, it seems only a matter of time before a player or a fan is seriously injured. New safety standards are needed and needed quickly.
Posted by Lark11 at 9:15 PM