Chris Dickerson, cousin of former NFL great Eric, has long been the best athlete in the Reds' farm system. However, prior to 2008 it looked like he would never translate his massive athletic skills into functional baseball tools. Nowhere was this truer than at the plate, where he just never made enough hard, consistent contact to be a productive hitter.

Despite his struggles, Dickerson's tremendous athleticism made him a candidate to "flip the switch" and instantly become an impact player. It's still too soon to tell, but that may be exactly what happened in 2008.

The Reds sent Dickerson back to triple-A Louisville to start the 2008 season. He didn't start out very well, posting a lackluster .241/.347/.349 slash line in 98 plate appearances in April. He followed it up with an even less inspiring .242/.290/.339 line in 69 plate appearances in May. However, at that point, his entire career changed.

The Reds have been incredibly patient with Dickerson's development due, in no small part, to his tremendous athleticism. However, until June of 2008, he had consistently underwhelmed. His raw tools never translated into baseball skills or quality production. In June, something seemed to click and his production finally began to match his raw tools.

The real question is was it for real or just the result of a small sample size?

Here are his minor league line drive rates and BABIP by month:

Obviously, Dickerson's BABIPs jumped significantly in the final three months, but that's not unexpected given that he was hitting line drives at a much higher clip. The type of ball in play determines how often they fall in for hits and no type of batted ball results in a hit more frequently than a line drive. So, while there is undoubtedly some luck in those BABIPs, they were driven to significant degree by his improved performance.

However, what remains unclear is how much was the result of Dickerson being "locked in" and on a white hot tear? What strikes me as interesting is that if it was merely a hot streak, how did he manage to carry it with him to the Major League level? Can you carry a hot streak up the ladder with you despite facing more advanced pitching?

The Reds called Dickerson up in August after the departure of Adam Dunn. Dickerson's first Major League game was August 12th, in which he went 1-for-4 with a walk. It wasn't long until Dickerson was racking up multi-hit games at the MLB level. He only played in 31 MLB games, but had 7 multi-hit games. In those 31 games, he had 102 ABs, six of which resulted in homeruns. All told, Dickerson posted a slash line of .304/.413/.608/1.021 during his MLB stint before being shutdown with a stress fracture of the ankle. Even so, Dickerson was the only reason to watch the Reds in the dog days of summer. While his time in the majors was undeniably minor, his impact was unquestionably massive. 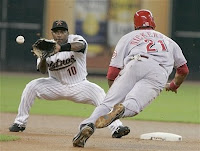 Obviously, Dickerson isn't Babe Ruth reincarnated, so it would be unreasonable to expect him to post anything close to a 1.021 OPS over the long haul. In addition, Dickerson posted an 18.5% line drive rate, but a .410 BABIP, so more balls fell in for hits than is to be expected. However, the great thing about a player like Dickerson is that his secondary skills are so strong that he only needs to hit ~.260 to be very valuable hitter. His stellar walk rate means that if he can hit just .260, then his OBP will be ~.360. On top of that, his power will generate a significant number of home runs and his speed will allow him to swipe him quite a few bases.

For 2009, the two pertinent questions on Dickerson seem to be:

2) If he does hit .260, will the Reds be smart enough to see just how valuable that will make him?

Not only did Dickerson put up massive production in 2008, he did it with a sweet swing.

Dickerson has a quiet stance at the plate. He stands tall at the plate and when the pitcher is in his windup, he bounces the bat off his shoulder a couple of times as a timing mechanism. He has a very small stride, which is really just him rolling up on his toes and putting his foot back down. He has a quiet lower body and very strong balance throughout his swing.

Dickerson has a smooth, flowing swing that you only see in lefthanded hitters. He fires his hips well, which generates significant rotational velocity. Rotational velocity of the hips is a key factor in the amount of power generated by batters. The more rotational velocity you can create, the more momentum you will produce. The greater the momentum when you contact the ball, the greater the force you impart on the baseball. Dickerson has strong hip action, which creates substantial rotational velocity and allows him to impart substantial energy to the baseball. He can really drop the head of the bat on the ball and when he does it usually travels a long distance. He gets good extension, but his swing does have a tendency to get too long, which can exacerbate his problems in making consistent contact. 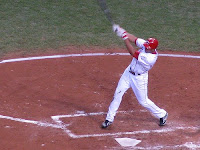 Dickerson has a tremendous set of tools, but what makes him all the more intriguing is that he plays a premier defensive position and plays it very well. One of the things I've come to appreciate is the value of players who combine plus defense and plus on-base skills while playing premier defensive positions. That's why both Paul Janish and Chris Dickerson intrigue me. By now, everyone understands the importance of on-base percentage in the game of baseball, but you usually only find the players with plus on-base skills at the corner positions. It's not hard to find a first baseman or leftfielder with above average on-base ability, but you don't often see players who combine the requisite defensive skills to play a premier position with the ability to control the strike zone needed to post high on-base percentages.

In the Reds organization, both Dickerson and Janish have these attributes, which is why they deserve a longer look to see if they can be productive enough at the plate to hold down starting jobs. If everything breaks right, Dickerson could be a gold glove caliber centerfielder with power, speed, and strong on-base skills.

Clearly, Dickerson's 2008 level of performance is not sustainable and an expectation of that is not what earns him his spot on this list. Even so, no one climbed higher on this list in the course of one year than Chris Dickerson. The big question remains whether he will make enough contact to post a respectable batting average. However, he has such a diverse set of skills that he really only needs to hit ~.260 to be an impact player at the MLB level. Dickerson is older than most of the other prospects on this list, but his upside remains considerable and in 2008 he took a big step towards reaching it. It will be very interesting to see how he performs in 2009 and, frankly, I think he's a big key to the Reds' chances in 2009. For now, Dickerson's massive tools and increased polish land him at #6 on the list.
Posted by Lark11 at 10:08 PM