Drew Stubbs continued to demonstrate tremendous athleticism and a well-rouned skill set in 2008. After being very conservative with his development and keeping him at low-A Dayton for the entire 2007 season, the Reds seemed to reverse course by aggressively moving Stubbs up the ladder in 2008. Ultimately, Stubbs made three different stops in the minors in 2008, finishing up at triple-A Louisville. It was disappointing not to see Stubbs get a September call-up to the majors, but considering that he made a three level jump in the minors it's understandable. Even though he didn't make it to the majors, Stubbs certainly solidified his status as one of the top prospects in the system.

The Reds sent Stubbs to high-A Sarasota to start the 2008 season. For Sarasota, Stubbs posted a slash line of .261/.366/.406/.772 with 5 homeruns in 358 plate appearances. Perhaps most impressively, his K/BB ratio improved to a stellar

82/50 mark. He cut down on his strikeout rate and increased his walk rate from his 2007 level of performance. In addition, he posted a stellar line drive rate of 26%. Given that Sarasota is a difficult hitting environment, his homerun total really isn't all that disappointing. He also found time to swipe 27 bases in 35 tries, which was good for a 77% success rate.

The Reds advanced Stubbs up the ladder to double-A Chattanooga. At double-A, Stubbs piled up 106 plate appearances and posted a slash line of .315/.400/.402/.802 with 0 homeruns. He also posted a 21/11 K/BB ratio. Double-A pitching didn't slow him down much, as he continued to make hard contact, evidenced by 23% line drive clip.

The final of his three minor league stops landed Stubbs at triple-A Louisville to finish out the 2008 season. He had 84 plate appearances and posted a .293/.354/.480/.834 with 2 homeruns and a 20/6 K/BB ratio. Once again, his solid 20% line drive rate demonstrated his ability to center the ball on the bat.

Stubbs has the type of tall, lean, athleticism that intrigues scouts. He's tall and lanky, but explosive, possessing both plus power and speed. Stubbs' problem has been his inability to make consistent contact, which is almost to be expected given his height. He has a larger strike zone and longer arms to get through his swing. While he has been plagued by strikeouts in his professional career, he seemed to turn the corner when he was required to choke up on the bat during the tail end of his 2007 stint at low-A Dayton. After choking up, Stubbs exhibited increased bat control, which enabled him to drastically cut down on his strikeouts. Not surprisingly, his offensive production improved as a result. Of course, the question was whether his improvement was real and would carry over into 2008 or merely the result of a small sample size that would prove illusionary over the course of the 2008 season. 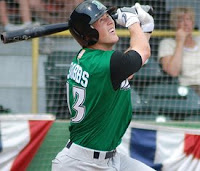 In 2007, Stubbs struck out once every 3.5 ABs for Dayton. In 2008, he struck out once every 3.7 ABs for high-A Sarasota, every 4.4 ABs for double-A Chattanooga, and every 3.8 ABs for triple-A Louisville. Obviously, Stubbs was improving even as he climbed the ladder to face a more challenging level of competition. However, it would be inaccurate to say that it was simply the result of choking up on the bat a couple of inches. In actuality, Stubbs has made more substantial changes to his swing.

During his professional career, Stubbs has worked to shorten up his swing. Perhaps not surprisingly, he has also adopted a wider stance at the plate. His setup is not as extreme as the one utilized by Chris Valaika, so he still utilizes a traditional stride to effectuate his weight transfer. The wider than shoulder width stance gives him a bit more stability at the plate and reduces some of the lower body action in his swing, which improves his economy of movement. His stance is fairly quite and includes a high back elbow and a small bat waggle. He has also shortened up his swing path both to and through the ball. 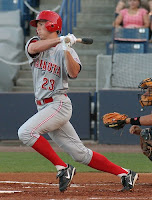 Once in a while his swing seems to get a bit top-hand heavy. Instead of pulling the knob of the bat at the ball and exploding out through it, he extends his arms too early by letting his top hand seemingly push the swing to meet the ball. Overall, Stubbs has a simple and fundamentally sound swing. Obviously, when trying to cut down on strike outs, length and wasted movement are the enemies. Through his efforts, Stubbs has managed to reduce his strike outs, but that improvement has come at a cost.

In his quest to cut down on the strikeouts, Stubbs has reduced his power output. Stubbs has very impressive raw power, but it really isn't translating into homerun numbers. At this point, Stubbs' efforts to limit his strikeouts and improve his contact rate have robbed him of some power. However, if Stubbs can improve his contact rate, then the power should eventually follow. He also has to get comfortable with the changes he has made, which should only help him rediscover his power.

As you can see in the following video clip, even with the shorter, more contact oriented swing, Stubbs can still absolutely launch the ball.


For video of Stubbs at the plate in the Arizona Fall League, click here.

As intriguing as his offensive game may be, Stubbs' calling card is still his defense. Stubbs was already a Gold Glove caliber defensive centerfielder when he was drafted out of the University of Texas.

Stubbs is a very valuable combination of plus defense at a premier defensive position. His speed and instincts allows him to cover a massive amount of ground in center and he also has enough arm strength for the position. The Reds have long struggled to develop prospects who can legitimately handle the premier defensive positions. However, this is obviously beginning to change. In the best case scenario, Stubbs joins Chris Dickerson and Jay Bruce to give the Reds the best defensive outfield in baseball.

Statistical analysis has begun to focus more on defense in recent years with the result that defense is more important than commonly realized. As new defensive metrics are developed to translate defensive performance into run value, defense is being valued much more highly. Fox Sports' Dayn Perry recently took a look at common attributes of World Series winning teams and one common thread he found was that they often had two legitimate centerfielders starting in their outfield. If Dickerson and Stubbs continue to develop, then they could really transform the future of the organization.

At this point, the worst case for Stubbs seems to be that of a bottom-of-the-order MLB hitter with Gold Glove caliber defense. He has managed to cut down on his strikeouts, but the emerging question is whether his power will return. If it does, then Stubbs will be an impact player with 20/20 potential at the MLB level. If it doesn't, but his contact rate stays strong, then he has the on-base skills to be an effective MLB tablesetter. It's not a question of whether Stubbs will be a quality regular at the MLB level, but rather just how good he'll be at the plate when he arrives. He has tremendous athleticism and a diversified skill set, but ultimately it will come down to whether his power translates into homerun production. For now, Drew Stubbs checks in at #4 on the list.
Posted by Lark11 at 9:11 PM