The more I see of Jackson, the more I like him. He's a strong, athletic outfielder for UC Berkeley. He's got a sweet lefthanded swing that drives the ball from foul pole to foul pole. His swing is compact, which allows him to be quick to the ball. There are some questions as to his power ceiling, but he is a pure hitter and his swing should translate well to the professional ranks.

On defense, Jackson uses his good speed to cover a lot of ground. As he continues to fill out, scouts fear he may have to shift to a corner outfield spot. Obviously, his value improves if teams can plug his bat into an up the middle defensive slot. In addition, Jackson has a strong, accurate arm that plays well in center and left, and would likely be at least adequate in right.

Jackson is the type of player I'd love to see the Reds grab in the supplemental round. He is currently projected as a late first round pick and most mock drafts seem to have him going to the Yankees. That said, I don't see the Yankees as a likely destination, as they will probably try to select any prospect who slides purely because of signability concerns. If things break right, Jackson could slip to the supplemental round, where the Reds would be wise to pounce on him and his well-rounded game.

Here is Jackson at the dish:

Spence is rapidly becoming a personal favorite. He's the kind of guy that is fun to root for and difficult not to like. Spence doesn't project as an early round prospect, but he might be an intriguing pick in the middle rounds. 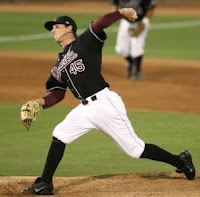 Spence is an Australian who decided that he wanted to attend Arizona State University in part because of research he did on the internet. He pitched in junior college before joining ASU and helping to pitch them into the 2009 College World Series in Omaha.

Unfortunately, Spence lacks plus velocity. In fact, he lacks even average velocity. His fastball doesn't touch 90, but he has managed to have very good success with good command and a quality array of breaking balls.

Despite his lack of average velocity, his performance at ASU has been stellar.

In 2009, Spence has posted a 2.33 ERA, 1.16 WHIP, and a stellar 109/25 K/BB ratio in 88.2 innings. In addition, Spence has given up only 3 homers in 2009. Scouts don't rate him highly because of his poor velocity, but Spence gets the most out of his gifts and could be the type of crafty lefty that defies expectations in the professional ranks. His lack of velocity will leave him with little margin for error in the professional game, but good control and a strong understanding of how to pitch can make up for a lot of sins.

Spence is a bit of a long shot, but he's a fun prospect and could be a sneaky good value.

Kipnis, an ASU teammate of Spence, is a very good hitter. In 2009, he has a slash line of .385/.496/.729 in 221 ABs. His on-base skills are elite and he has the ability to post an OBP that is .100+ higher than his batting average. He doesn't have much power, but could profile well as a table setter, especially in light of his ability to draw more walks more often than he strikes out.

Here is a look at Kipnis at the plate:

Unfortunately, the knock on Kipnis is that he may not be able to hold down centerfield in the professional ranks, which would leave him at an outfield corner where his lack of power doesn't play very well. Kipnis is an overachiever who performs at a higher level than his tools. He could ultimately be a player who doesn't fit into any well-defined role, but he's a professional hitter whose approach at the plate would be an asset in any organization.

Kipnis was selected in the 4th round of the 2008 draft by the Padres and should do better than that this time around. Kipnis is another player I'd love to see the Reds select.
Posted by Lark11 at 10:07 PM