What's Up with Jay Bruce?

Thus far, Jay Bruce's season would have to be considered a disappointment. On the season, he's hitting .216/.294/.474/.768 with a 45/19 K/BB ratio and 14 home runs. Outside of the power production, his total production is unimpressive. Still, there are reasons for optimism as his component stats are actually improved over 2008. 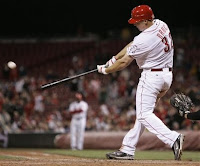 Despite his lower level of production, there are a number of positives in his 2009 plate approach. His walk rate has improved by 1.7%, while his strikeout rate has fallen 2.9%. Overall, he's drawing more walks and taking fewer strikeouts. He's also seeing more pitches, as his #P/PA is up to 3.98 from 3.76.

Obviously, his approach is better in 2009, not worse. So, obviously the problem isn't in his approach at the plate or his contact rate.

Here is his ball in play chart:

The obvious difference is that he's hitting ground balls to the rightside 15% more often than he did in 2008. Extrapolating just from the numbers, it looks like Bruce is rolling over on outside corner offspeed pitches resulting in a lot of weak ground balls to the right side. He needs to get back to driving the ball the other way and going with the pitch. Also, judging by the rate at which he is hitting fly balls, I wouldn't be surprised to discover that he's dropping his back shoulder during his swing. That's the typical flaw when excessive fly balls are involved.

At this point, veteran pitchers are taking advantage of Bruce's lack of experience. Sophomore slumps are common because pitchers begin to "get a book" on young hitters as they make their way around the league for a second and third time. However, Bruce has so much talent, it's just a matter of time before he gets back on track.

Fortunately, on the defensive side of the game, Bruce has taken a step forward. He was reputed to be a good defensive player in the minors, but he wasn't all that impressive in 2008. However, he's covering more ground in 2009. According to UZR/150, which measures defensive runs above average per 150 games, Bruce is 8.8 runs above average in right field this year. According to John Dewan's +/- system, Bruce is a +1 and ranks 13th among MLB right fielders.

Most impressively, Bruce's arm ranks #1 among all MLB rightfielders. He currently has 6 kills and is allowing runners to advance only 47.7% of the time.

Bruce's biggest problem is his age. He's only 22 years old and he's still learning to handle MLB pitching. At this point, it seems likely that pitchers have made some adjustments to exploit perceived weaknesses. Bruce just needs to adjust back to those adjustments.

Overall, Bruce's game is improving and eventually his overall stats will come more in line with his component stats. Unfortunately, his swing isn't locked in right now, so he'll need to get back on track. I wouldn't be surprised if he's pressing trying to offset the loss of Joey Votto and any other semblance of offense on the roster.

Realistically, it's only a matter of time, as Bruce's skill level will win out in the end. The Reds may have to ride it out a bit longer, but a hot streak should be just around the corner.
Posted by Lark11 at 8:19 PM