Draft Musings: Leake and Boxberger sign on the dotted line

Well, the card carrying members of the Reds nation can rest easy today. This weekend, the organization inked their top two picks from the 2009 draft, both of whom could provide a nice boost to the farm system.

It seems that every year fans get up in arms and worry that the draftees won't sign, but every year the negotiations drag out to the last hour. Players electing not to sign and heading back into the draft the following year is mostly definitely the exception, rather than the rule. Agents use the paranoia of the organizations and fans to drive up the asking price, so it's not necessarily in the players' best interests to sign early. This year, the Reds got it done with a day or two to spare.

The Reds signed RHP Mike Leake to a contract that includes a $2.27M signing bonus, which was ~$200,000 over his MLB slot recommendation. The Reds reeled in RHP Brad Boxberger for $857,000. 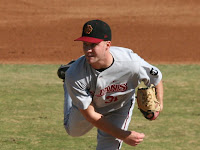 Given that Leake signed for only ~$200K above MLB's slot recommendation, it's easy to wonder why the deal didn't get done earlier. It hardly seems like he was making unreasonable demands or driving a hard bargain. One possible reason for the delay in the signing could be the strategy of MLB of not approving contracts that exceed slot recommendations until right before the deadline.

Before the draft takes place, MLB establishes recommendations for signing bonuses for draft picks. This tactic is designed to keep costs down and was implemented by the commissioner in 2000. According to Baseball America, first round signing bonuses rose 23.3% in the 1990s, but only 3.9% in the 2000s. So, at least in the big picture, it's a strategy that has worked. However, it's also a tactic that has rewarded teams willing to run afoul of MLB by exceeding slot recommendations. So, the benefits and burdens haven't necessarily fallen on all teams equally, which is a problem given that the amateur draft is designed to remedying competitive imbalance.

It'll be interesting to see how the Reds handle Mike Leake for the rest of 2009. I've heard conflicting reports that he'll pitch in 2009 and that the Reds will shut him down. If the tendinitis he was battling has completely subsided, then I'd like to see him pitch a few professional innings in 2009.

Given how conservative the Reds are with their prospects, I'd expect both Leake and Boxberger to start out in the Pioneer League or low A-ball.

The Nationals find themselves in a rather interesting conundrum in regard to their first round pick, Stephen "best pitching prospect ever" Strasburg.

First, it must be said, that it's in the best interests of BOTH Strasburg and the Nationals to get a deal done. 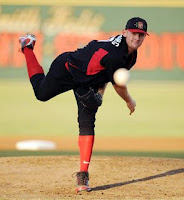 The Nationals are a recent transplant to Washington, D.C. and it hasn't gone well. They have a new ballpark, which means that they will be in D.C. for the long haul. However, the Nationals are in dire need of a shot of legitimacy. They "won" the right to draft Strasburg by losing the more games than any other team in 2008. They are on pace to "win" the first pick in next year's draft by again dropping more games than any other organization.

As for Strasburg, he was picked first overall, so he's not going to improve his draft status by returning to the draft in 2010. In fact, unless he would be willing to sign a "redraft approval" to allow the Nationals to draft him again in 2010, Strasburg would be selected no higher than 3rd. The Nationals will likely get the #1 overall pick on merit and they would be awarded the #2 overall pick as compensation for not signing Strasburg.

It's difficult to envision anyone giving Strasburg significantly more money when he is the 3rd overall pick in 2010 than when he was the 1st overall pick in 2009. In addition, given that he is such a polished prospect, Strasburg would likely spend the entire 2010 season in the Nationals' rotation. That would give him an entire year of service time, which would move him one year closer to free agency. If Strasburg sits out the entire 2010 season, then he will not earn any service time. Instead of hitting free agency in 6 years, he will instead require 7 years. And, that extra year will cost one season of "prime of his career" salary. By sitting out, Strasburg will cost himself one year of free agent level earnings (maybe ~$15-20M) that he'll never get back.

To make sitting out a year worthwhile, Strasburg would have to get ~$10M more from the team that drafts him in 2010 than what he would receive from the Nationals. Obviously, there is an argument to be made that Strasburg should hold out for more because he could get injured during the course of his career and never reach free agency. However, that argument would seem to be countered rather effectively by the chance that Strasburg could get injured pitching in independent ball while waiting for the 2010 draft and never get a big pay day at all.

In short, Strasburg and the Nationals need each other.

However, there are long-term considerations at play that may derail the deal.

Clearly, uber-agent Scott Boras is trying to use Strasburg to completely redefine the established benchmarks for MLB signing bonuses. If he can get Strasburg significantly more money than any previous draftee, then that will have a significant trickle down effect on all high draft picks in the future. And, of course, on Boras's bank account. For Boras, Strasburg isn't simply another player, but rather a significant opportunity. Strasburg is the best chance Boras has had to explode the draftee pay scale in MLB.

As for the Nationals, they too have future considerations to take into account. The Nationals are bad enough that they will likely receive the 1st overall pick in 2010. Fortunately for the Nats, they will likely again have the opportunity to draft a "once in a generation" talent in catching prospect Bryce Harper.

Ultimately, it makes too much sense for both sides not to get a deal done, but it'll go down to the final minute. Regardless, given the escalating cost of the #1 overall pick in both the NFL and MLB, expect each league to address the issue in the next round of Collective Bargaining. The draft is a mechanism for addressing competitive imbalance, but it has to be considered broken if the worst teams cannot sign the best prospects.
Posted by Lark11 at 10:02 AM