Well, we are at that all too familiar point in the season. The point at which Reds fans reflect on everything that went wrong during the season and try to figure out what what needs to be done to contend in the following season. This post will focus on the latter, but posts will undoubtedly return to the former in the not too distant future.

After a disappointing season, the pundits have turned on the Reds. After being hailed as the darkhorse in the NL earlier this year by many in the media, they are now being buried just a few months later. It's a bit surprising that there is such a massive swing in media opinion. Ideally, they would take the time to form an objective opinion about the health of the organization, rather than being so swayed by the 2009 W/L record.

Personally, I think it's difficult to look at what the Reds have done as of late and not see an improved squad. You can certainly argue that the Reds overpaid for Scott Rolen, but you can't argue that he's not an upgrade over Edwin Encarnacion. The emergence of Drew Stubbs in centerfield represents a clear upgrade over Willy Taveras. At the bare minimum, Stubbs and Rolen represent a significant upgrade in run prevention, but both are also likely to be substantial upgrades on offense. Add in a healthy and improved Jay Bruce and a potential big step forward for Homer Bailey and the Reds could be a solid team in 2010.

Still, to me, the biggest determining factor to the success of the Reds next year will be what they do with Yonder Alonso.

Yonder Alonso is currently the biggest chip the Reds possess, but they need to figure out how to maximize the value of that particular asset. The ability to extract the most value from Yonder Alonso may well determine the organization's success in 2010.

The purpose of an MLB farm system is to support the success of the Major League team. There are two ways for an organization to use its farm system to support the MLB team. A perfect example of the differing ways to utilize prospects are the Oakland A's and the San Francisco Giants over the past decade. 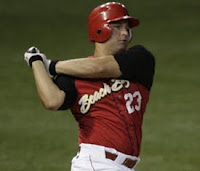 The Oakland A's have focused on developing prospects and making use of them at the big league level. They extract the value of the first 6 years of cost-controlled production from their prospects and then deal them when they get expensive for more young prospects.

The San Francisco Giants took the opposite approach. They traded away prospect after prospect to acquire establish veterans to round out the roster around Barry Bonds. The Giants wanted to win while Bonds was still on the team and their philosophy removed the inherent risk of prospects and allowed them to acquire players who were already past the growing pains stage of their MLB careers. Since Bonds has retired and the Giants have suffered through some lean years, they have switched their focus to developing homegrown talent.

The general sentiment in the Reds nation seems to be keeping Yonder Alonso and shifting Joey Votto to left. Personally, I'd rather seem them trade Yonder for a player that better suits their needs.

A few years ago the Atlanta Braves promoted Jarrod Saltalamacchia to the majors and were left with a catching conundrum. They already had Brian McCann entrenched behind the dish, but Saltalamacchia was one of the more promising young prospects in the game. Still, there wasn't room for both behind the plate. There was talk of shifting Salty to first base, but the Braves elected to deal him to the Rangers instead. The Braves were smart enough to recognize that Salty's value was largely tied to being a catcher, which made his trade value higher to his actual value. In short, his value as a catcher for another team was higher than his value as a first baseman to the Braves. When trade value outpaces actual value, then a trade is necessary for the organization to maximize the value of the asset.

Now, obviously, the loss of positional value from a shift from first base to leftfield isn't as significant as a shift between catcher and first base. Still, moving Votto to left to accommodate Yonder will result in a significant downgrade on defense. The presence of Joey Votto at the MLB level may well mean that Yonder's value to other teams is higher than his value to the Reds.

Overall, it seems like there is better total value (offense + defense) to be reaped from trading Yonder than there is in keeping him.

The obvious holes on the Reds 2010 lineup are at shortstop, catcher, and leftfield. If the Reds can flip Yonder to get an impact bat at one of those positions or fill two of those slots with solid players, then a trade would be the better course of action.

The Reds have the makings of a solid lineup in 2010, but they need to start utilizing the farm system to support the major league team. They have value in the farm system, but it may not be the type of value that they can easily plug into the MLB lineup. The better option at this point would be to trade it for an asset that better fits the organization's needs.

The Reds aren't too far off from being tough to handle, but they need to use the value in the system to support the MLB team. Over the past few years, it seems that the Reds are not extracting the maximum amount of value from their developing farm system as they should. This would be a good offseason to change all that, as a shrewd move or two will put the Reds in good position to compete in 2010.
Posted by Lark11 at 9:12 PM