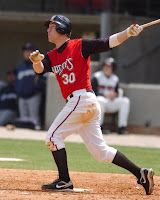 system. Oddly enough for one of the top prospects in the system and the game, he is still also something of an enigma. The Reds have yet to really lock Frazier into a position, which gives him an impressive bit of versatility, but also makes him more difficult to value. Positional value and defensive prowess are large components of prospect valuation, but it's difficult to know what to do with Frazier. Do you compare him to second basemen, third basemen, or outfielders? How does he perform defensively at each position? The sample size just isn't large enough to know.

Still, there is no denying Frazier's talent or value, regardless of the position he plays. He should play a central role for the Queen City home 9 for years to come.

Frazier spent the 2009 season splitting time between double-A Carolina and triple-A Louisville. He opened up the campaign at double-A, where he hit .290/.350/.481/.831 in 119 games and 451 ABs. He boasted a 67/42 K/BB ratio, 40 doubles, and 14 homeruns. He ripped line drives at a 24% clip, but performed poorly in the basestealing department, as he was success only 7 out of 15 times. The 14 homeruns were impressive, but the 40 doubles were really impressive and indicate additional power projection in his game. Additionally, his production was legitimate, as his BABIP was .316, which may have even been a bit unlucky in light of his very high line drive rate. His solid overall production earned him a late season promotion to triple-A.

Overall, it was a very productive and successful season, as he handled the highest levels of the minors without much difficulty. His linedrive swing enables him to post high averages, should help him avoid lengthy slumps, and also helps explain his massive number of doubles. He can hit the ball with authority and effectively drive it from gap to gap.

Frazier has one of the most unorthodox swings in the system. Fortunately, it is also one of the most effective. The defining characteristic of Frazier's swing is the complete extension of his left arm before the pitch arrives. For comparison sake, below there is a photo of Frazier sandwiched between photos of two of the best right-handed hitters of the modern era. 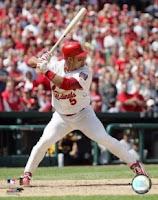 Edgar Martinez and Albert Pujols are two of the best right-handed hitters of all-time and, not surprisingly, have swings that are very fundamentally sound. On the left, Edgar has just completed his stride and has begun to fire his hips. However, for our purposes, the important thing to look at is his left arm, which is bent at the elbow. On the right, Albert Pujols is in the middle of his stride, which is largely just picking up the front foot and placing it back down. However, as with Edgar, you can see some bend in Pujols' lead elbow. If you look at the photo in the middle, then you can see Todd Frazier in mid-stride with a completely extended lead arm. There is no bend in his lead elbow, as he is basically using an "arm bar" type swing. He's managed to reduce it a bit at the professional level, but it is still very pronounced in his swing.

In addition, his hand position is both lower and farther back than the other two. In order to counteract his different hand position, Frazier utilizes more shoulder and lower body in his swing. His swing is certainly not aesthetically pleasing, but he has the skills to make it highly productive.

Frazier starts with a shoulder-width stance and a small crouch. He holds his hands up by his right ear with the bat almost parallel to the ground. To stay loose while waiting for the pitch he utilizes a small bat waggle. His stride involves a small step forward towards the pitcher. He then breaks down his front leg by rotating up on his toe and significantly turning his knee back in towards the catcher. After the knee is drawn back, he rolls down off his toe and back down onto his foot, which helps move his knee towards the pitcher and transfer his weight to meet the pitch. So, while the plant foot stays grounded after landing from the stride, his front knee is moving significantly, first back towards the catcher and then forward towards the pitcher. It gives him a lot of unique leg action in his swing.

The leg action Frazier incorporates into his swing is done in part to work around his arm-bar and the hand position it creates. To get from his hand position into the hitting position, Frazier has to take a slightly more circuitous approach. The arm-bar makes it difficult to properly fire the swing with the hands and arms, so Frazier has to trigger the swing with lower body action and by pulling the bat with upper body rotation. As a result, Frazier has a more active lower half and more rotational action in his swing than is to be expected.

Once he does trigger the swing, his hands work effectively and enable him to consistently get the barrel of the bat on the ball. He has good hand-eye coordination and strong wrists which help him consistently square up the ball.

The obvious question on this type of swing is whether it prevents the hitter from handling the inside pitches. If the hitter's arms are already extended before contact, then it becomes much more difficult to turn on inside pitches. Good fastballs or biting breaking balls running in on the hands could potentially cause problems for this type of swing. This has been the concern with Frazier since his professional debut, but he continues to defy expectations by having little difficulty with pitches on the inner half. He obviously understands his swing and what he needs to do to make it work for him. Despite the "arm bar" and the work around swing mechanics it necessitates, Frazier continually gets himself into good hitting position in the contact zone, which is the only thing that really matters.

Here is a look at Frazier in action:


Again, comparing Frazier with Pujols (see: photos below), you can see a lot of similarities despite the differences in the early stages of their swings. In the contact zone, their lower bodies are in similar positions and they both keep their head down on the ball. In addition, their hips and shoulders have rotated similar amounts, though Frazier has opened up faster. One potential difference between the two can be seen by comparing the position of the right arm. Pujols is effectively utilizing both arms in his swing, but the position of Frazier's right arm indicates that his swing is driven more by strong shoulder rotation and pulling through with his lead arm. That's especially true on inside pitches, as his "arm bar" swing leaves him little option but to speed up the rotation of his shoulders and spin open to get the bat on the ball. 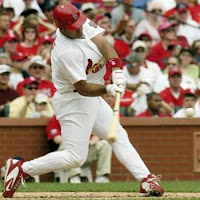 As of now, the concerns about Frazier's swing are being drastically outweighed by his non-stop production. It's undeniably unorthodox, but style always yields to substance. Frazier continues to get the job done. It's been that way since the Little League World Series all the way through to the professional level and there isn't any reason why it can't continue all the way to the majors.

This is where Frazier remains a bit of a mystery. Typically, versatility is viewed as a good thing. Here, however, it's difficult to properly value Frazier when the Reds have yet to lock him in at a position. Alternatively, the Reds have considered him for first base (37 games), second base (37 games), third base (22 games), shortstop (112 games), and leftfield (91 games). Frazier's impressive baseball acumen enables him to comfortably move all over the diamond.

Frazier has a good, accurate arm with a quick release which plays well both in the infield and the outfield. He doesn't have quick feet or first step quickness, which limits his range at shortstop. He has good speed when he gets underway, which should give him solid range in the outfield. He probably projects best at the hot corner, but Scott Rolen is there for the foreseeable future.

Obviously, the higher up the defensive spectrum he plays, the more value he brings to the table. His versatility is impressive, but it would be nice to see the Reds give him a set position. It would definitely help with his valuation, but his ability to play multiple positions will enable him to fit more seamlessly into the holes of the 25 man roster.

The most impressive part of Frazier's game is undoubtedly his feel for the game. His baseball instincts are tremendous, which is due in large part to playing the game non-stop as a kid and his upbringing in a family of ballplayers. He really understands the finer points of the game and it certainly shows in his play.

In short, Frazier is a ballplayer through and through, which is part of why he lands at #2 on the list.
Posted by Lark11 at 10:34 PM