The Reds selected Yonder Alonso with the 7th overall pick in the 2008 draft. When a team drafts a first baseman in the first round, they are doing it primarily for his bat. To justify drafting a player with minimal positional and defensive value, the player must have an outstanding bat to drive his value. Yonder certainly fit the bill coming out of college, but has yet to really establish that level of performance in the professional ranks.

Still, the Reds are in need of impact offensive talent and Yonder Alonso could ultimately fit the bill...if they can only find a defensive position for him to play.

Yonder spent the 2009 season bouncing around three levels of the minor leagues.

Yonder was holding his own at double-A when he offered at a pitch, but ended up with a fractured hamate bone instead. He missed roughly a month-and-a-half with the injury and when he returned he took his first hacks in the Gulf Coast League. He had 18 plate appearances in the GCL and posted a .133/.278/.133/.411 with 2 hits and no extra base hits.

Overall, Yonder posted a .292/.374/.464 in 2009. It was solid production, but for a collegiate prospect and one of the most polished hitters in the draft, it was mildly disappointing, especially in light of the performance of fellow draftees Gordon Beckham, Justin Smoak, and others.

Yonder is patient and utilizes a very effective approach at the plate. He controls the strikezone very effectively and shows the rare ability to work deep into counts. His ability to minimize the number of times he forces consequences to at bats on "pitcher's pitches" enables him to effectively tip the probability of success in his favor. He waits for a pitch he likes and makes sure that he doesn't miss it when he gets it. His pitch recognition skill is very strong, as indicated by his remarkably strong K/BB ratio. In addition, he has very good hand-eye coordination, which enables him to make consistent, hard contact. 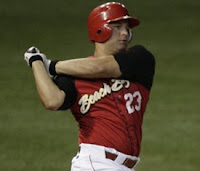 At the plate, Yonder utilizes a fairly quiet stance. He doesn't have much excess movement while waiting for the pitch. While the stance matters far less than hitting position when the pitch enters the hitting zone, I still prefer a quiet approach.

Yonder is another player who utilizes a very small stride. His stance is wider than shoulder width, so his stride doesn't entail much forward movement. However, it does involve movement towards home plate. Yonder uses a slightly open stance, so his stride operates to close up his body and get into better hitting position.

While waiting for the pitch, Yonder holds his hands a bit higher than most, actually up behind his left ear. This position results in the bat being essentially horizontal to the ground, rather than pointing to the sky like most hitters.

He also uses a high back elbow and utilizes a small bat waggle which raises the bat straight up from horizontal towards vertical. The combination of his higher hand position and his high back elbow gives him a bit of additional length to his swing, as it takes him slightly longer to draw his hands back into hitting position so he can properly fire his swing.

When coupled with his higher hand position, Yonder's stride in towards home plate makes him more comfortable driving pitches that are middle away. When a hitter steps towards homeplate to close up his stance, it's often possible for a pitcher to be successful working in on the hands, especially when the hitter has a bit of additional length in the early stages of his swing. Striding in towards the plate and the delay in getting his hands back into hitting position makes it difficult for him to be quick to the ball on pitches on the inner half.

If Yonder can shorten his swing path on inside pitches, it should help unlock his pull power. Regardless, his bat speed and slight uppercut swing generate substantial power. He fires the hips to generate power and gets good extension through the ball.

Yonder's well-rounded hitting skills made him one of the top talents available in the 2008 draft. You can access his draft video here.

Here is a video clip of Yonder at the plate during the Arizona Fall League:

Another thing evident from the video clip is Alonso's physical build. He has a stocky build with heavy, thick legs and something of a barrel chest. He lacks quickness and agility, which shows in his heavy feet and will preclude him from making an impact with his legs.

In drafting Yonder, the Reds selected the best player available, despite the fact that they already had a good young first baseman locked in at the MLB level. He was an interesting draft pick for the Reds in that they had focused primarily on the premier defensive positions in recent drafts, including Drew Stubbs and Devin Mesoraco. In drafting Yonder, they targeted an impact bat, despite lacking a position for him to play.

So far in his professional career, Yonder has played first base. While holding down first base, Yonder has consistently posted "Runs/150" numbers of between +1 and +3 at each stop, which rates him as an average first baseman.

Still, he will always be an "offense first" type player and he likely won't age well, as his body type will slow him down further as he continues to fill out and add weight. Overall, his range will always be limited and playing at any position other than firstbase will likely be unworkable.

Interestingly enough, the plan for Yonder in the 2010 season is for him to shift to leftfield for double-A Carolina. It's too soon for any early returns, but his body type and limited defensive abilities make it a somewhat dubious proposition. Ultimately, Yonder profiles best at firstbase and attempts to shift him to a different defensive position will cut into his total value.

For some reason, the Reds seem hesitant to trade Yonder for a player of similar value, but one who better fits the needs of the organization. If Yonder if forced to play out of position, then his defensive limitations will drag down the value of his bat. To justify playing Yonder in leftfield his bat would have to generate so much production that it would offset the runs given away by his shoddy glove work.

Overall, the Reds would likely be better off playing a better defensive player in left, even if his bat was somewhat less productive than Yonder's.

Alonso remains the most well-rounded hitter in a farm system suddenly flush with pitching prospects. His bat is intriguing and Alonso is just the type of hitter lacking in the Reds lineup. The Reds need more hitters who are disciplined and willing to work deeper into the count. Unfortunately, his main position is already occupied, which ultimately could necessitate a trade.

Given his likely struggles to play a competent leftfield, a trade is probably the best solution. However, that may have to wait until Yonder rebuilds his trade value after the hamate bone fracture sapped his power and production.

For now, his offensive skills are sufficient to land him at #1 on the list.
Posted by Lark11 at 10:22 PM