Byron Wiley has been released

Well, time to play a bit of catch-up on a few topics that have escaped mention on this blog.

I've been holding off a bit on writing about this particular topic in hopes of getting a bit more information that might serve as an explanation. Unfortunately, no such information has been forthcoming. In fact, it's barely been mentioned at all. So, let's just dive right in: 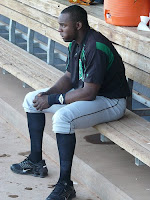 The Reds have released Byron Wiley.

Now, as I have previously written, I'm a fan of Byron Wiley, probably more so than most. I like his well-rounded hitting skills. He controlled the strikezone better than the vast majority of the prospects in the system and (I suspect) he has additional power projection to his game.

Admittedly, he was limited defensively and was likely to be relegated to leftfield. As a result, he would have to make it as an offense-first type prospect, if he was to make it at all. And, while there were legitimate questions revolving around whether his bat could bear that particular burden, there seems to be no obvious rationale for not letting him prove it one way or the other.

Nevertheless, the Reds elected to cut ties with Wiley just a short time after he was promoted to high-A Lynchburg. To start off the 2010 season, perhaps in a sign of his tenuous standing in the organization, the Reds made the decision to send Wiley back to Dayton for another unnecessary go around with low-A competition.

He had yet to really find his stride in 2010, but still managed to post an OPS of .787 for Dayton. He was promoted to Lynchburg where he racked up a grand total of 13 lackluster games played and 44 uninspiring at bats before he was handed his walking papers. Obviously, his OPS of .558 indicates that he wasn't producing at the necessary level, but the sample size was so small as to be essentially meaningless.

At this point, it's difficult to believe that the decision was based solely on performance, as the sample size is simply too small to be meaningful. If so, then it would be reasonable to infer that the Reds simply do not value on-base skills very highly. They would be rejecting the player profile that Wiley represents, rather than the player himself. And, quite obviously, you never want an organization to reject something as fundamentally important as "out avoidance" (aka: on-base percentage).

On the other hand, if the decision was not based on performance, then it is difficult to imagine what rationale could be underpinning the decision. You simply don't let value leave the organization without getting something in return. So, either the Reds simply don't view Wiley as having any value (which seems a troubling conclusion) or something else was driving the decision. Either way, it's a move I don't understand.

A bit more information and a bit more clarity might make the decision a bit more palatable, but regardless I am sorry to see Wiley leave the organization.
Posted by Lark11 at 10:34 PM