Chris Heisey has consistently managed to exceed expectations in the professional ranks. It seems the better the competition, the better he performs. In fact, he has managed to improve his OPS every year he has been in the farm system (.762 to .791 to .822 to .900), which is a rather remarkable accomplishment.

Heisey is one of the more well-rounded prospects in the system and has a baseball IQ that allows him to effectively utilize his tools.

Despite the lower level of competition, Heisey performed well enough to catch the eye of the Reds, who selected Heisey as a junior in the 17th round of the 2006 draft.

Heisey spent 2009 splitting time between the two highest levels of the minor leagues. 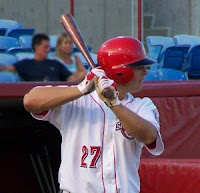 For double-A Carolina, Heisey broke through to a previously unattained level of performance. In 71 games and 314 plate appearances Heisey posted a slash line of .347/.426/.572/.998 with 13 homeruns and a 34/34 K/BB ratio. He actually earned the breakout, as evidenced by a robust 20% line drive rate, which supports his higher than usual .362 BABIP. His approach at the plate was impressive, as he managed to walk as often as he whiffed while still slugging .572. Typically, hitters have to sell out to generate good power production, which results in an increased number of strikeouts. Heisey, however, managed to limit his strikeouts while still generating substantial power.

His performance earned him a promotion to triple-A Louisville. The tougher level of competition slowed him down a bit, but he still managed to post a respectable slash line of .278/.322/.465/.787 in 270 plate appearances. The more advanced pitchers attacked him differently and found weaknesses to exploit, as evidenced by his 23/7 K/BB ratio. He still posted a strong line drive rate of 19%, which means his BABIP of .306 was probably a bit lower than it should have been. Ultimately, Heisey had some growing pains as he adjusted to the more advanced competition, but his play was solid and with the wisdom from his new found experience he should be fine.

Heisey has a well-rounded game and possesses 5 legitimate tools. While he doesn't have one standout tool, he does everything rather well. His tools also play up a notch due to his baseball savvy and instincts. He has a good feel for the game and it shows up in his production.

In his setup, Heisey uses a slightly wider than shoulder width, but stands up quite tall. He holds his hands up high, by his right ear, and uses a high back elbow and a small bat waggle to keep his body loose and free of tension while waiting for the pitcher. As the pitcher delivers the ball, Heisey takes a small stride forward to transfer his weight to meet the pitch. His stride also helps cock the hips and generate load to power the swing. However, before he can fire the swing, he has to drop the back elbow down into hitting position.

Heisey has a fairly uncomplicated, fundamentally sound swing, but it's not the most aesthetically pleasing swing in the system. At times, his swing is a bit top-hand heavy and he uses a bit more upper body rotation than usual to compensate and pull the swing through the hitting zone. This action gives his swing more of a rotational look than a strong drive forward directly towards the pitcher. In essence, Heisey seems to transfer some of the energy generated by his swing around his body, rather than directly towards the pitcher. Regardless, he still manages to generate solid bat speed and work effectively from gap to gap.

Heisey's swing path involves a slight uppercut and he gets good extension out and through the ball. On his follow-through, Heisey keeps both hands on the bat. His more active top hand and added rotational action can result in a somewhat lower than normal finishing hand position and bat wrap.

Here are a couple of different angles of Heisey in action:

Heisey has above average speed that enables him to cover quite a bit of ground in the outfield. He also has average arm strength and good accuracy to his throws. While Heisey can capably handle all three outfield spots, he profiles better in the corners. His range is stretched in center, which makes him average at best out there. However, he projects as a potential plus defensive outfielder in left and right.

In 2009, Heisey played exclusively centerfield for double-A Carolina. In 68 games, Heisey made 142 outs, had 3 assists, and 4 errors. His Runs/150 mark was a 0, which grades out as an average fielder.

Ultimately, the sample sizes are too small to reveal much, but he has the tools to be a solid defensive outfielder. Unfortunately, he seems a bit stretched in center, as he has less positional value in center and his bat won't play quite as well in a corner spot.

Heisey is an intriguing, well-rounded prospect. In a farm system that is loaded with interesting talent, Heisey is one of the rare prospects who is greater than the sum of his individual parts. In recent memory, it seems that the vast majority of Reds prospects promoted to the majors underwhelm and looked overmatched, but Heisey could be the type of prospect who performs up to his projection. He won't ever have the highest ceiling, but Heisey could be an intriguing value at the major league level. His max projection is probably that of a league average outfielder, and it remains to be seen if he'll ever reach it, but if the right opportunity presents itself he could carve out a few years as a starting outfielder in the majors. For now, his combination of well-rounded skills and baseball instincts is enough to land him at #5 on the list.
Posted by Lark11 at 9:45 PM