Well, a few final thoughts on the Reds draft class.

1) First, Yasmani Grandal. I touched on Grandal before the draft and 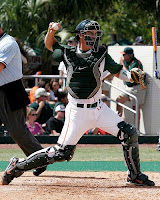 my position remains unchanged. He simply didn't seem to be the best value on the board at that point. The main reasons are related to both his performance and his position.

When determining a player's value, you have to have a basis of comparison, then you can determine how far above or below that established benchmark a player may be. Typically, you see a player compared to league average or replacement level. Regardless of the specific benchmark, an above average catcher cannot have the same impact as an above average player at another position, as the catcher position has inherent playing time limitations.

In the NL, catchers are going to play only ~135 games, at most. In the AL, where teams have the benefit of the DH, a catcher with a plus hit-tool can contribute at DH on days when he isn't behind the dish. But, in the NL, if you have a catcher who is 25% above replacement level or league average, then he is undeniably valuable. That said, the playing time limitations mean that he won't have the same impact as a player at another position who is 25% above above average or replacement level. The other player will simply be able to provide his +25% production over many more games.

Additionally, the development path for catchers is significantly more perilous than for other positions. Catchers have more to learn on both sides of the game and can also get nicked up more easily than other players. As a result, there is more inherent risk in the catcher position than other non-pitching positions. So, I think you have to factor in the higher level of risk in making your first round selection.

Grandal has some impressive attributes, including switch hitting ability, plus on-base skills, and a potentially solid hit tool. However, when you factor in the inherently lesser impact of the catcher position, the higher level of development risk, and the lingering questions about both his bat and glove that I touched on in my pre-draft write-up means that Grandal is unlikely to be the best option at that point in the draft.

Personally, I have a hard time justifying passing up both college lhp Chris Sale and high school outfielder Josh Sale, both of whom were still on the board when the Reds selected Grandal. Chris Sale was one of the leaders in the nation in both strikeout rate and walk rate. He had a strong combination of stuff and polish. As for Josh Sale, Baseball America rated him as having both the best power and the best plate discipline in the entire high school draft class. One scout was quoted as saying that Sale had the best bat speed he had ever seen in an amateur. Josh also has plus make-up and a strong work ethic. Josh Sale might be the type of bat that, in hindsight, makes everyone wonder how he slipped so far down in the draft.

Grandal certainly has value, but from where I sit there were other players on the board that provided better value and more upside. Unless you have a catching prospect of the Joe Mauer, Matt Wieters, or Buster Posey class, then I'd have a hard time selecting a catcher with a first round pick. It's difficult to add true impact talent to the system, but the first round pick represents the best opportunity to do just that. I'm just not sure Grandal is the best option for doing so. 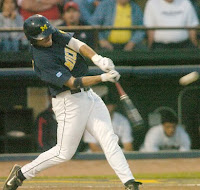 2) While I'm not wild about Grandal in the first round, I love LaMarre in round 2. LaMarre was someone I wrote up in my pre-draft list of guys the Reds should target. I'm quite surprised that LaMarre slid to the Reds in the second, but I'm ecstatic that he did. LaMarre has potentially five above-average tools, a high baseball IQ, and a hockey player mentality.

LaMarre signed quickly and has already made his debut for low-A Dayton. Some question whether LaMarre can stick in centerfield, but I think he has the speed and instincts to handle it just fine. To me, LaMarre represents very good value in the second round. For better or worse (probably for better most of the time), it's unusual that the Reds actually draft someone I'd like to see them draft, so LaMarre is a pick that I really liked.

3) In rounds 3 and 4, the Reds nabbed a couple of collegiate middle infielders. They selected junior Devin Lohman in round 3 out of Long Beach State. Lohman bats right and throws right, also stands 6-2 and 195 lbs. For the Dirtbags, Lohman hit .404/.471/.550 with 1 homer and and 7 steals in 15 attempts in 40 games. On the season, he hit only 1 homerun, but did manage to collect 17 doubles. Still, it is questionable how much power he'll have in the professional ranks with wood bats.

In round 4, the Reds grabbed Brodie Greene out of Texas A&M.

Greene was a senior in 2010, bats right, throws right, stands 6-1 and weighs in at 195 lbs. Greene had very strong production for the Aggies, posting a .395/.462/.673 with 14 homeruns, 23 steals in 28 attempts, and a 31/24 K/BB ratio in 65 games. He has played both secondbase and shortstop at the collegiate level, but he obviously gets a boost in value if he can stick at shortstop. However, the bat has potential for a middle infielder.