"In the 10th round of the 2010 Rule IV draft, the Cincinnati Reds select Kevin Arico, pitcher, University of Virginia."

Arico stands 6-4, weighs in at 215 lbs, and throws from the right side. He's got a good, strong build and room for additional physical projection.

The Reds selected him as a junior, but Arico still had enough time to put together a nice collegiate career for the Cavaliers.

His performance helped the University of Virginia get deep into the Super Regionals. I had the opportunity to watch him work in the deciding game against the Oklahoma Sooners.

In that game, Arico worked exclusively with a fastball that sat in the 88-90 range (though, I'm not sure he even got into the 90s in the Sooner game) and a slider that sat in the low 80s with downward bite to it. He leaned heavily on the slider, which is easily the better of his two offerings, but that may ultimately speak more to the quality of his fastball, than the impressiveness of his slider. Still, the slider is a good pitch. It sat in the 80-83 range with downward tilt to it and Arico consistently worked the outside corner with it. 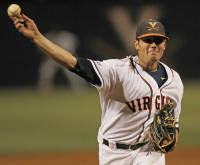 The Sooners made a lot of contact against Arico, even if it wasn't consistently hard contact. The Sooners had a few seeing-eye singles and Texas Leaguers, but they did hit a couple balls hard. Arico's fastball didn't have enough velocity or movement to keep anyone honest, so they focused on the slider. As a result, Arico didn't get many swing-throughs on his pitches. He did get a called strikeout on a well placed fastball on the inside corner to a righthander. He was ultimately chased from the game on a three-run homer to lefty Cody Reine after runners had reached on an error and a hit by pitch.

Mechanically, Arico is sound. He's a bigger guy, so he's got longer limbs to keep in sync. The longer limbs also gives him some length to his arm swing and delivery, but also a bit more leverage to his arm action. He also uses a slower tempo in his delivery. He has a nice high leg kick and little wasted movement. He gets his arm up into proper throwing position at the right time and uses a high three-quarter arm slot. The lower arm slot negates some of the benefits of a being a taller pitcher, but overall Arico has a nice combination of physical build and clean mechanics which should give him additional projected upside. Overall, Arico seems like a solid value in the 10th round.

In the limited action I've seen, 11th rounder Drew Hayes and 10th rounder are similar prospects. Kevin Arico undeniably had the better collegiate career, but Hayes seems to have the better stuff. As a result, Hayes might be the better professional prospect. Regardless, both are going to need to improve their respective levels of performance to find success at the MLB level, whether it's through increased velocity, a new pitch, or improved command. But, that's what the minor leagues are all about, developing players.
Posted by Lark11 at 7:02 AM