Well, I was going to write this last night, but ran out of time. And, now that I've got the time, it's no longer timely. Even so, here are a few quick thoughts on Sean Gallagher. 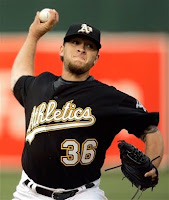 The San Diego Padres recently designated Sean Gallagher for assignment. Unfortunately, earlier today, the Pirates acquired his services at a very reasonable cost. The Pirates didn't even have to cough up a mid-tier prospect, rather just collect the cash lying around between the cushions of the clubhouse couch. For that cash, the Pirates landed an intriguing pitcher with good upside.


Obviously, Gallagher is someone I've been high on for a while. To me, he's a pitcher with a fastball that averages 92 mph and touches 94 and a curveball with true plus potential. If you want a glimpse of the quality of his curveball, then check out the yakker he drops on Chone Figgins for the strikeout. Also, here's another look at his good fastball and curveball combo.


Perhaps the most intriguing part of Gallagher is his age. He seems like he's been around forever, but in actuality he's only 24-years old. His birthday is December 30th, which means that he is younger than the competition he frequently faced coming up through the amateur ranks. And, playing against older, more mature players can aid in a player's development. Additionally, in the minors, his performance frequently earned a bump in value for "age vs. level". Obviously, age plays a big part in a prospect's value and, despite bouncing around the majors a bit, I don't think it's inappropriate to view Gallagher as a prospect.


His Major League career has been characterized by instability, in location (Chicago, Oakland, San Diego), job responsibilities (Starting, Relieving), and health (Knee Injury). When put in this context, I think you have to refer back to the minor league track record to supplement the projection of Sean Gallagher. At this point, I'd love to see what Gallagher can do in the rotation over a much larger sample size.


Gallagher seems like the perfect buy low candidate. A young pitcher with strikeout stuff and a potential plus swing-and-miss pitch. Additionally, given the absurdly low cost to acquire him, the risk/reward balance on acquiring him was tilted massively in our favor. There was very little to lose and quite possibly a great deal to be gained. Given that the Reds will potentially cut ties with both Bronson Arroyo and Aaron Harang after the season, there could be a need for a player matching the description of Sean Gallagher. In essence, he was free talent and the Reds failed to capitalize on the opportunity.


With respect to the value of Sean Gallagher, either the powers-that-be in Major League Baseball see something I don't, or I see something they don't. Whatever the case, Gallagher is now off to his fourth organization. Unfortunately, that organization is not the Cincinnati Reds.
Posted by Lark11 at 9:46 PM