Well, the trade deadline is approaching and the Reds are running neck-and-neck with the St.Louis Cardinals. There are a lot of rumblings about the Cardinals making a big move, perhaps even reeling in big fish Roy Oswalt. If that happens, then the Reds could be moving backwards simply by not moving forward. As the old saying goes, if you aren't improving you are just standing still.

That said, what move should the Reds make. Obviously, the one that provides the most bang for the buck. And, the obvious weaknesses in the 25 man roster are 1) leftfield, 2) shortstop, 3) #1 starter, and 4) high leverage reliever. So, the million dollar question is which one should they target?

First and foremost, we can scratch number 1 starter off the list. Truth be told, the Reds are in fairly good shape in the rotation due to the emergence of Travis Wood and Mike Leake. The return of Edinson Volquez hasn't gone as smooth as hoped, but the potential is there for him to have an impact. At the moment, the Reds may not have a true #1 starter to anchor the rotation, but they have a lot of quality arms with good upside.

If they actually were interested in acquiring a #1 starter, then they should have gone after Danny Haren, who went to the Angels for the unbelievably low price of Joe Saunders, Patrick Corbin, Rafael Rodriguez, and a PTBNL (rumored to be Tyler Skaggs). With Haren off the market, the price is likely to be too high on any of the remaining pitchers who would represent an improvement.

So, what about shortstop?

Well, I'm still not a Orlando Cabrera fan. In fact, he's about as bad as I expected him to be, but at this point it's difficult to imagine being able to acquire a shortstop that represents a significant upgrade. The Reds need an impact player and those are tough to come by at the shortstop position. Improvements in the Reds' W/L record will follow improvement in team Run Differential. Accordingly, the Reds need to focus on trades that will significantly improve the team Run Differential, which will be difficult to accomplish simply by acquiring a new shortstop.

That said, if I was the GM, the one shortstop for whom I'd make a strong play is Jed Lowrie, who could be a legitimate impact bat at either shortstop or second base. Not to mention, he could also spell Scott Rolen when he needs a breather from carrying the entire team on his back. Still, Lowrie may not be quite ready to step into full-time duty after missing most of the season with mono, but he would be an asset both this year and well into the future.

If it's not Lowrie, then maybe it needs to be a high leverage reliever...

I'd love to see the Reds add a high leverage reliever who can work some quality innings, but the volatility of relievers always makes me nervous. One of the worst trades in recent organization history illustrates the problem of dealing for relievers. The Reds shipped Felipe Lopez, Austin Kearns, and Ryan Wagner for a package including a couple of relievers. Obviously, that deal didn't turn out very well. The price was high, but the production was not.

Like most Reds fans, I have fond memories of the 1990 squad that featured the Nasty Boys. The value of having 3 elite, shutdown power arms working high leverage innings cannot be overstated. That said, it's simply not easy to find those guys in this day and age. It's unlikely to be worth it to pay the price necessary to get relievers of this type when they are already established, but the inherent volatility of the position would make trying to identify them before they are established at the MLB level would be equally problematic.

If the Reds were to head in this direction, I wouldn't mind Brandon League of the Seattle Mariners. He has a big arm and very heavy groundball tendencies.

All of which leads us to leftfield...

Leftfield is commonly referred to as an "offense-first" position. While it's true that the lesser defensive demands of the position lends itself to hiding sluggers, the fact remains that, regardless of position, a player's value is a function of his runs created and runs prevented. So, the rules of baseball value don't cease to apply simply because conventional wisdom holds that leftfield defensive doesn't matter. Defense matters....everywhere. 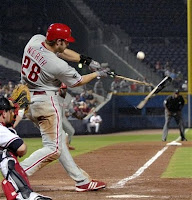 That said, Jonny Gomes, who conventional wisdom holds has been a significant asset to this team, has actually been dragging the team down. If the Reds want to make a push for the postseason and be serious contenders, then they need to remove Johnny Gomes from full-time duty. Plain and simple. Cut and dried.

Gomes certainly has value, but he needs to be used appropriately to bring out that value.
I was high on Gomes when he was first signed and I still like him now, but that's dependent on using him correctly. First, his glove is so poor that it completely drags down the value of his production. It's hard to believe, but his glove really IS that bad. Gomes would be most valuable used as the righthanded portion of a platoon and a power bat off the bench.

During his time in Cincinnati, Jonny Gomes has quickly stepped into the shoes of the faithfully departed Adam Dunn. Gomes isn't just taking the over the 7th position on the lineup card, but also the role of the lightening rod that was inadvertently filled by the Big Donkey.

For years, Dunn straddled the divide between the sabermetricians and the traditional scouts. Sabermetricians used more advanced metrics to value Dunn, while the more traditional scouting valued him based on his tools and how he went about his production. Obviously, depending on what you use to evaluate him, he grades out very differently.

Despite the accolades he receives from some quarters, the truth is that as of now Gomes is producing at almost exactly a replacement level. In essence, the Reds are getting almost no production out of the leftfield spot.

On offense, Gomes is hitting .274/.326/.461/.787, which is hardly inspiring production for an "offense-first" position. Of course, his 13 homeruns and 64 RBI are used as evidence of his "strong production." In truth, even his offensive production hasn't been strong, as evidenced by his 2.0 Park Adjusted Runs Above Average. For comparison sake, Brandon Phillips (7.5), Ryan Hanigan (4.9), Ramon Hernandez (3.2), Joey Votto (35.4), and Scott Rolen (15.3) are all significantly better in Park Adjusted Runs Above Average.

Obviously, his offense isn't really driving his value, which is problematic because we haven't gotten to the disturbing part of his game. Whatever offensive production that Gomes generates above the norm, he then gives right back on the defensive side.

Not surprisingly, Jonny's total run production grades out poorly. His Runs Above Replacement is a meager -0.1. In essence, Jonny is replacement level, which is stunningly bad production. The type of production you would expect from the 25th man on the roster when called into action off the bench.

When you translate his total run production into Wins Above Replacement (WAR), Gomes grades out as 0.0 wins. He provides zero wins above what a replacement player would provide.

If the Reds truly want to upgrade, then they need to get better total run production from leftfield. The best acquisition would be Jayson Werth, who over the past few seasons has been roughly 5.0 Wins Above Replacement. Obviously, acquiring Werth more than halfway into the season would limit the amount of games he would get to play for the Reds, but he would still represent a roughly 2 win improvement over the remainder of the season.

By going from Gomes to Werth in leftfield, the Reds could ultimately be going from 85-86 wins to 87-88 wins. That could be the difference between the postseason and another uneventful October.

If the Reds cannot or will not acquire Jayson Werth, then they need to consider internal options. In fact, Chris Heisey or Chris Dickerson might be the better option as the full-time starter. Or, using Jonny Gomes only against southpaws. Or, maybe even a Chris Heisey/Danny Dorn platoon, which personally I'd love to see.

Whatever they do, they would be hard pressed to get worse total production than what is being provided by Jonny Gomes. It would also allow Dusty to use Gomes in a role that better utilizes his skills and enables him to provide better overall run production.

If the Reds want to make a serious postseason push, then they need to look hard at areas of weakness and figure out ways to improve them. The Reds simply aren't good enough to succeed with replacement level production at an offense first position.

I like Jonny Gomes, but he has to be used correctly. The Reds need to get better production from leftfield, plain and simple.
Posted by Lark11 at 10:54 PM