Addison Russell stands 6-0 and tips the scales at 215 lbs. He bats right, throws right, and was last seen holding down the shortstop position for Pace High School in Florida. Last summer, Russell's weight ballooned up and questions emerged about whether he would be able to stick at shortstop or have to move over to the hot corner. However, Russell rededicated himself in the weight room, shedding 20 lbs and adding muscle. At this point, the consensus has shifted back towards Russell being able to stick at shortstop. Obviously, staying at short would increase his value, but his bat will play at either position.

As for signability, Russell seemingly has a strong commitment to Auburn University. In fact, he verbally committed during his sophomore season and has said "I am wanting to be the first member of my family to go to college and graduate from college. I am also looking to be a good role model and example for my brothers and sisters." That said, his baseball talent may require him to put his collegiate career on hold for a while.

Russell was part of the under-18 U.S. National team that won the gold medal at the 2011 COPABE 18U/AAA Pan American Championship in Columbia. Russell hit the only home run, a grand slam in the championship game, for the U.S. squad in the tournament. He earned all first-team honors by hitting .393 with 11 hits (3 2bs, 1 3b, 1 HR) with 9 RBIs and 11 Runs scored.


Here's a look at Addison in action courtesy of BaseballFactory:

Russell moves well in the field. He doesn't possess elite range, but he has soft hands and good fielding actions. When coupled with his above average arm strength, he can make the plays he can reach. He's not silky smooth and his arm action is unusual, but he may be able to hold down the position as he climbs the ladder.

At the plate, Russell has a tendency to tinker with his swing mechanics, but ideally he'll find his optimal mechanics and stick with them. In the first part of this batting practice session, he utilizes a slightly wider than shoulder width stance and a bat waggle in his pre-pitch stance. As the pitcher delivers the pitch, Russell turns his front knee back and inward by rolling up on his toe, which effectively cocks his hips. This move allows him to load up for the swing despite not using a significant stride. Later in the batting practice session, Russell uses a higher leg kick instead of turning his front knee inward. He picks his foot up off the ground and strides forward to begin the weight transfer. When he commits to the swing, he fires the hips to generate power, which gives him impressive bat speed. His hip rotation is explosive. There is, however, some length and looseness to his swing, which could create holes to be exploited or throw his balance off on offspeed pitches, so he may need to tighten things up. 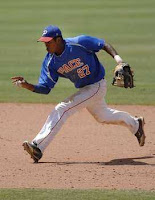 To me, Russell is a prime candidate for the Curtis Granderson treatment. When Granderson joined the Yankees, hitting coach Kevin Long worked with him on refining his swing. One of the things that he did was to dump the one-handed follow-through in favor of keeping both hands on the bat throughout the swing. Edwin Encarnacion is another hitter who has credited this change with helping him unlock his offensive potential. By utilizing a two-handed follow-through, the hitter should realize advantages from increased bat control and a shorter swing, both factors may also lead to improvements in balance. Further, Encarnacion believes it keeps him from pulling off the ball too soon and too aggressively, problems which occasionally plague Russell as well.

When I look at Russell and his bat speed, I see a guy who could easily shorten his swing without losing much in the way of power. If Russell can shorten up his swing and become more adept at driving the ball to the opposite field, then he could become a more complete hitter and be well on his way to a special career. At the very least, it's easy to dream on his swing and bat speed.

Russell is another prospect near the top of  my very short draft list. While there certainly is a risk that he'll have to slide down the defensive spectrum to third base, his offensive potential largely negates that concern. There seems to be little doubt that Russell can stick on the left side of the infield and he has more than enough bat to be an impact player at either shortstop or third base.