Buttrey is a righthanded pitcher from Providence Sr High School in North Carolina. He has a good physical frame for a pitcher, standing 6-5 and tipping the scales at 205. He has a good fastball that can touch 94/95, but sits in the low 90s. In addition, he has shown the ability to cut it or run it, which is impressive polish for a high school pitcher. He features a big breaking curveball with sharp bite that has good potential and a fringe changeup. He'll need to refine his secondary offerings, but he has good upside and room for additional projection.

Here's a look at him in action:


Buttrey uses his height very well, both to generate velocity and throw on a downward plane. He uses a very strong, high leg kick and an aggressive and long stride. He works at a fast tempo and has a clean arm action. He definitely needs to refine his command and his secondary offerings, but he has all the makings of a impact pitcher.

Light is a righthanded pitcher for Monmouth University. He stands 6-6 and weighs 215 pounds. Despite his height, Light features very good control, walking only 12 batters and striking out 87 batters in 86 innings. He also features very good stuff, including a fastball that sits in the low 90s and reaches 96. He also features a slider and changeup that are inconsistent, but show promise.

As for his mechanics, he works from a high three-quarter arm slot. His arm action is long in the back, which occasionally makes it slow to get up into proper position, but the arm action is clean overall. He has a high leg kick with good coil and makes a strong, aggressive move towards the plate with a long stride. Despite the long stride, Light manages to consistently get out over his plant leg in his delivery. Despite the strong move towards the plate, he maintains good balance throughout the delivery and he finishes up in proper fielding position. 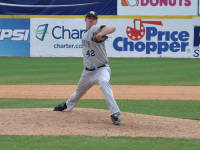 Light is an intriguing combination of stuff and polish. His size gives him room for additional projection, but his command gives him a measure of polish not usually seen in taller pitchers.