Admittedly, this one strikes me as being rather unlikely and really doesn't address an area of need for the Reds, but if the following comes to pass, then the Reds would be foolish not to pounce:

MLB.com's Jenifer Langosch lists Marc Rzepczynski as a non-tender candidate. Rzepczynski made $504,000 in 2012 and is arbitration-eligible for the first time this winter. Langosch believes that right-hander Kyle McClellan is also a non-tender possibility.

Personally, I just can't see the Cardinals cutting Rzepczynski loose, as I suspect the Cardinals recognize that his value will likely outpace even his arbitration award. Even if they didn't feel he was worth, it seems likely that they would trade him rather than non-tender him, but crazier things have happened so we'll consider it for a moment.

I was intrigued by Rzepczynski the first time I saw him work in Toronto. He combined good stuff with a lot of polish, but we'll get back to that after a quick detour through his pitching mechanics. Rzepczynski has solid mechanics, which are largely defined by an unusual arm swing that I can't recall having seen seen in any other pitcher...except one. Curiously, that other pitcher also made his MLB debut in 2009. If you compare Rzepczynski with Madison Bumgarner, the mechanics are pretty close.

Both pitchers utilize high leg kicks with coil at the apex to build up momentum to impart on the baseball. Each also maintains good balance at the apex of the delivery, while being fairly deceptive with the ball. 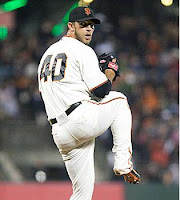 As both unpack the leg kick and start to drive towards the plate, they incorporate an unusual arm-swing to bring the ball up into the pitching position. Most pitchers use a far less severe arm-swing, but Bumgarner and Rzepczynski both swing their pitching arm directly out towards third base.

I can't imagine anyone teaching such an arm-swing, as not only does it seems like an unnatural motion, but it also eliminates any deception in the delivery. The ball is right there for the hitter to pick up. Even so, it's likely the way both pitchers naturally threw the ball when they first climbed up a pitching mound. It certainly works for them.

After they use the arm-swing to bring the ball up into position, they use similar stride lengths and throw with similar high-three quarter arm slots.

Personally, I think Rzepczynski is being wasted in relief, though his stuff undoubtedly plays up out of the bullpen. Still, I could see him as a solid mid- to back-of the rotation starting pitcher. Given that the Reds are short in the southpaw department, both in the rotation and in the bullpen, adding another lefty would have value.

For his career, Rzepczynski has ratios of 3.97 BB/9 and a 8.13 K/9 to go along with a 4.04 ERA and a 1.38 WHIP. One other factor would make him a good fit for the Reds, as he has heavy ground ball tendencies. On his career, he has a 56.1% ground ball rate, which was even better over his last two seasons (64.8% and 58.9%, respectively). To put it in perspective, his career rate is better than that of the Reds two biggest ground ball starters, Johnny Cueto and Mike Leake, who each chimed in with a rate of 48.9%.

The acquisition of Rzepczynski wouldn't address an area of immediate need, but adding value is always a good idea. The Reds lacked a southpaw starter in 2012 and, unless they move Aroldis Chapman into the rotation, that will likely be the case in 2013 as well. Further, given the impossibility of relying on the man of glass, Bill Bray, the Reds could use Rzepczynski as a second or third lefty out of the bullpen.

If the Reds learned nothing else from the loss to the Giants in the NLDS, they should at least recognize the advantage that having three lefties in the bullpen afforded Bruce Bochy. By having Javier Lopez, Jeremy Affeldt, and late season acquisition Jose Mijares, Bruce Bochy could use a very aggressive approach to running his bullpen. Frankly, that, and his willingness to actually manage aggressively, gave him an advantage over Dusty Baker.

Adding an lefty arm like Marc Rzepczynski is a good value play, regardless of whether they would utilize him in the rotation or out of the bullpen. Now, all they need is for the Cardinals to do something foolish to make him available. I probably won't hold my breath.