Now that the Giants have salted away the 2012 season and added their second title in three years (seriously, what universe is THIS???), it's time to look at the Reds' needs for 2013. The obvious needs are (1) table-setting, (2) bench depth, and (3) finding a replacement third baseman or leftfielder.

I was blown away by the caliber of the At Bats in the NLCS. Both the Giants and Cardinals featured a number of professional hitters who combined a disciplined plate approach with an all-fields hitting style. These hitters seemingly never gave away an AB and were difficult to beat. Particularly, Buster Posey and Marco Scutaro for the Giants; Carlos Beltran and David Freese for the Cardinals. I would love to see the Reds add another professional hitter with a disciplined approach, the obvious need being the top of the order spots.

There is simply no way the Reds can head into the 2013 season with the same sub-sub-sub-standard table-setters they featured last year. It's almost inconceivable just how putrid the Reds were in the 1st and 2nd spots in the order. And, it's indefensible, especially when you have the best hitter in baseball in the third slot. The number one job for the Reds this offseason is to ensure that Joey Votto has more ducks on the pond in 2013. Given how much the Reds have invested in Votto, the offense will and should revolve around him, which means that putting him in a position to do as much damage as possible is a must.

Anyway, avert your eyes, as here are those numbers for posterity sake:


It's almost literally impossible to do worse in 2013.

There is an unspoken, and occasionally spoken, idea that the Reds should just ride out 2013 because Billy Hamilton is on the horizon for 2014 and beyond. The first problem is that you simply can't count, or rely, on the great Hamilton to pan out. He's an exciting prospect, but exciting prospects, especially those with questionable hit tools, flame out all the time. Second, there's simply no way the Reds can afford to wait another season without addressing the top of the order.

Given how close the Reds came to winning it all in 2012, it's imperative that they seize the opportunity. The time is now. The Reds very easily could have won a championship in 2012. As a Reds fan, it's absurd and surreal to even write the prior sentence, but it's true. For the first time in seemingly forever, there was no huge revenue, dominating AL team lurking in the shadows. No Yankee or BoSox team waiting to club the NL pennant winner into submission. Not even the Rangers, who, while never getting over the hump in 2010 or 2011, were certainly a much more well-rounded team than the 2012 Tigers. The AL was weak this year.

While the Reds' flame-out was somewhat understandable, given the loss of Johnny Cueto and the power-sapped Joey Votto, but it's not easy to get over. That's especially true because the Rangers are only getting wealthier, the Angels are likely to be better, the A's more experienced, the Tigers still strong, the Rays lurking, and the BoSox and Yankees will reload to some degree. And, that's just the AL, so the 2013 season will be no cake-walk.

I can't support the idea of sitting on our hands and waiting/hoping for Billy Hamilton to be the savior, especially since even if he becomes the next Rickey Henderson we could still slot our 2013 table-setter into the second spot in the order behind Hamilton. I could make the argument (and I probably will later this offseason) that the Reds should  make a Mat Latos-type trade for an established, legitimate leadoff hitter. But, for now, I would target an undervalued player who could address a few areas of need. 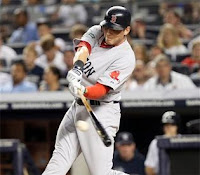 If I was Walt Jocketty, I would definitely make a play for Boston Red Sox outfielder Ryan Sweeney. In the past, I haven't been that high on him because the power never developed. That may preclude him from being a true impact bat, but he can still be a nice complimentary player. And, the boxes he does tick happen to be areas of need for the Reds.

As I mentioned above, the Reds need more disciplined, professional hitters and more tough ABs at the top of the order. While Sweeney has had some volatility to his performance, his offensive profile certainly fits the bill. Frankly, I think one area of roster construction where the Reds deserve some criticism is in their failure to bring in players with the right offensive profile for the top of the lineup.

It's certainly understandable that they haven't managed to land a legitimate leadoff hitter. They are rare. In fact, I'm not convinced that it isn't more difficult to find a legitimate leadoff hitter than it is to find a number 1 starter. On the other hand, the Reds failure to buy any "leadoff hitter lottery tickets" is less understandable. Maybe it's Dusty's influence that has seen the likes of Corey Patterson and Wily Taveras sprint through the revolving door at the top of the lineup. Maybe it was Walt. Regardless, the Reds have rarely even brought in players who possess the right offensive profile for the leadoff spot.

As a result, they have not only lacked a legitimate leadoff hitter, but have never given themselves a chance to catch lightning in a bottle. A good example of lightning in a bottle can be found in the San Francisco Giants championship history. Two times. The Giants are not an organization known for valuing late-count, disciplined hitters, but in both of their championship seasons they won the leadoff hitter lottery with players who fit that offensive profile.

In 2010, the Giants got significant contributions from Andres Torres, who hit .268/.343/.479 out of the leadoff slot. Torres wasn't projected to be the full-time leadoff man, but he had the right offensive profile, including two minor league seasons where his OBP was .80+ points higher than his batting average, when his performance peaked. The peaking performance made him a valuable contributor to the Giants' championship push.

The same thing happened in 2012, as the Giants once again hit the lottery with Gregor Blanco. They didn't need him in the leadoff slot (rather using him as a second leadoff hitter in the 7th spot), but he had that type of profile and his performance peaked. When Melky Cabrera was nabbed for cheating, Blanco slid comfortably into the starting lineup. Blanco hit .244/.333/.344 on the season after having some hot streaks during the season. Blanco had a strong walk rate and rarely chased pitches outside the zone. While a larger sample size caught up to him, he was a significant contributor for the Giants during the season and in the postseason. The Giants, in both championship seasons, benefited from taking a chance on a hitter with a leadoff hitter profile. The performance level wasn't there going into the season, but the offensive profile was.

Sweeney has the offensive profile the Reds desperately need. On his career, Sweeney has a slash line of .280/.338/.378 and has seen an average of  3.99 pitches per plate appearance. However, in his four years with the A's he had OBPs of .350, .348, .342, and .346 in a very tough park for hitters. Further, his disciplined approach seems to be improving, as in 2011 with the A's Sweeney saw 4.34 pitches and in 2012 with the Red Sox he saw 4.31 pitches, which made him one of the most disciplined hitters in baseball over the last two seasons. Given that the Reds, as a team, saw 3.80 pitches per plate appearance in 2012, good for only 19th in all of baseball, adding more disciplined plate appearances should be a priority. Further, while Sweeney's power is still underwhelming, that could play up in a hitter's park like Great American Ballpark.

Sweeney can also hit, as evidenced by his 21.6% career line drive rate. In fact, his line drive rate hasn't dipped below the 20% mark since his last season (2007) with the White Sox. And, he also makes contact at a very high clip, 88.4% contact rate for his career, which would be good for third on the Reds behind Ryan Hanigan (90.6%) and Miguel Cairo (89.6%).

So, Sweeney sees a lot of pitches, draws a good number of walks, makes a lot of contact, and hits a lot of line drives, which gives him the offensive profile the Reds need. And, while his current level of performance is already enough to be a significant improvement for the Reds at the top of the order, there remains a decent possibility of an uptick in performance level to "impact player" for our 2013 championship push.

The final reason Sweeney makes sense is that he is a very good defensive player who can handle all three outfield spots. That gives him three possible roles as the roster develops this offseason. He could be the starting centerfielder, if the Reds want to turn the page on the Drew Stubbs era. He could be the starting leftfielder, if the Reds decide Ryan Ludwick is simply too expensive. Or, he could be a 4th outfielder/platoon mate, if the Reds bring back both Ludwick and Stubbs.

In addition to the lack of power, Sweeney's other drawback is his durability. In 2012, Sweeney missed time with separate issues, including a mild concussion, a toe injury, and a broken pinkie finger from punching a door after being robbed of a hit by Omar Infante. His 2012 performance level was disconcerting, as he hit a paltry .260/.303/.373, but it's hard to imagine anyone succeeding in the Bobby Valentine tornado of despair. Further, I wonder if concussions have a tendency to linger longer in baseball player performance than in other sports, as hitting is such a highly reactive process. So, that might be at play as well, but the larger point is that a fresh start in hitter friendly park would likely give him a performance boost.

As for his availability, the BoSox were reportedly looking to trade him right before he broke his pinkie last season, so he is likely both available and affordable.

All in all, Sweeney seems like the right player at the right time for the Reds. To recap, Sweeney (1) has the offensive profile the Reds need, (2) has the defensive ability and position to address the Reds problems, (3) is affordable in terms of salary ($1.75M in 2011), and (4) is likely available at a reasonable cost from the BoSox. Unless the Reds are looking to make a Latos-type move for a legitimate leadoff hitter, Sweeney is definitely worth considering.
Posted by Lark11 at 12:25 AM