It's been a while since the Reds had two legitimate southpaw starting pitching prospects, but Ismael Guillon joins Tony Cingrani to give the organization just that. Guillon is younger and less polished, which gives him significantly higher development risk than Cingrani, but his current performance level is strong and his future upside is considerable.

The Reds signed Guillon out of Venezuela back in 2008 for $220,000. A subsequent physical exam revealed an elbow injury requiring Tommy John surgery. The Reds voided the original contract and re-signed him to a second contract for less money (a point well worth remembering as we move through this write-up). Some organizations were considering him as a position player, but the Reds saw him as a pitcher and were content to wait out the rehab process. Guillon didn't take the mound until 2010, but immediately rewarded the Reds for their judgment and patience. He spent 2010 in the Arizona rookie league and 2011 with the Billings Mustangs, acquitting himself fairly well at both stops, though his control was problematic for the Mustangs. The Reds sent him back to Montana for a return engagement to start out the 2012 season.

In 2012, Guillon split time between the rookie Pioneer League Billings Mustangs and low-A Dayton. He was equally effective at both stops, maintaining a high performance level throughout the season.

Prior to the 2012 season, Guillon had already made some refinements to his mechanics to smooth out some of the rough edges, including reducing (though not entirely eliminating, see photo below) a wrist wrap that he previously utilized. 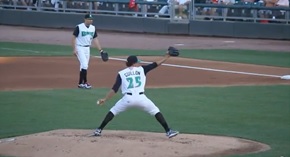 In his pre-pitch stance, Guillon stands tall on the rubber with his feet close together. His hands are up high in front of his face as he peers in for the sign. He starts his windup with a step back towards second base (for ease of reference, let's call it the "Rocker Step", a term I am borrowing from the excellent "The Physics of Pitching" by Solesky and Cain), while simultaneously bringing his hands up over his head. When his Rocker Step back towards second base finishes and the weight is fully transferred, the knee of his stride leg actually straightens and locks, which is unusual. The completion of the weight transfer allows him to shift his left foot down onto the rubber. He then brings the right leg up into the leg kick, which comes up past parallel and includes body coil from turning the front hip inward. His movements are effective in generating force to transfer to the baseball.

The modern trend in pitching mechanics is towards efficiency in movement. For example, you no longer see the extreme windmill arm action in the windup that was typical of the Satchel Paige era. Obviously, there was wasted movement in that extreme type of motion and there certainly are benefits to be reaped from economy of movement. These benefits include fewer moving parts to control and coordinate, as well as improved stamina from reduced physical exertion. However, I do wonder if we have now gone too far in that direction, possibly sacrificing improved generation of force in favor of more economical movements.

For example, the Rocker Step back towards second base (as opposed to a Rocker Step that simply shifts the leg-kick foot down in front of the rubber) and bringing the hands up over the head (as opposed to bringing them only up in front of the chest) are likely more effective in generating force than their more economical counterparts. A Rocker Step back towards second base and bringing the hands up over the head both operate to shift the center of mass of the body farther back, which creates a greater distance to travel when driving to the plate. The greater distance to travel means that there is a better opportunity to generate and gather force prior to the apex of the leg kick. There's a reason why cricket bowlers utilize a running start in their deliveries, as it enables them to more effectively create force through better incorporation of their bodies in the delivery. For my money, Guillon's Rocker Step and hands-over-the-head movements are more advantageous in the generation of force.

From the apex of the leg kick, he begins to impart the generated force to the baseball. He drives towards the plate with a solid stride, which is of good length and aggression. While his stride length isn't quite ideal, it's long enough to permit full and complete rotation of the hips. Further, any attempt to lengthen his stride to reap added benefits in force could potentially be undone by an inability to get out over his stride leg. He may already be using the longest stride that his athleticism can handle.


The differential between the rotation of the hips and upper body is a key to the effective and efficient generating and imparting of force. The differential used by Guillon is acceptable, but short of optimal (see photos below). He doesn't delay the upper body rotation quite long enough to maximize the force, which creates more work for the arm.

There are two potential issues with Guillon's stride. First, he lands in a closed off position, which causes him to throw slightly across his body. Second, he lands on the heel of his foot, which can cause instability and inconsistency. The ball of the foot cushions the impact in ways that the heel does not, as a result landing on the heel can lead to an erratic release point and problems with control. In addition, the combination of these two issues means that he frequently spins out on his heel in his follow-through, falling off to the third base side to finish (see photo below). Obviously, such a finishing position creates problems for properly fielding the position.

Guillon throws from an over-the-top arm slot with a quick arm action. His elbow maintains good position relative to the shoulder throughout the delivery. Further, his arm gets up into proper position by the time the stride foot lands, which keeps the arm in sync with the body. In his delivery, Guillon uses a quick tempo, which creates an appearance of both high energy and looseness in his movements. The quicker tempo may be unsettling to hitters and increase the deception on his pitches, but may also be part of his struggles to find consistency. At times, his quick tempo makes it appear that he is rushing his delivery and not consistently repeating his movements.

Overall, Guillon does a nice job in both phases of the delivery. He generates force well in the first phase and imparts it to the baseball efficiently in the second phase. Here's a look at Guillon in action, including a slo-motion view at the very end, courtesy RedsMinorLeagues on YouTube:


Guillon has already knocked some of the rough edges from his mechanics, which are now fundamentally sound and provide him with a solid pitching foundation, but he still has refinements to make. If he can tighten up a few aspects of his delivery, then he may be able to find the consistency he needs in order to achieve sustainable success.

Guillon features a three-pitch mix, including a fastball with minimal movement that sits 89-92 mph and touches 94, a legitimate plus-change-up, and a below average curve ball. His change-up is a legitimate swing-and-miss pitch and it helps his fastball play up. I am always encouraged when a pitcher features a plus change-up, as it's a pitch that requires both good feel and fundamental understanding of how to effectively change speeds. A lot of young pitchers simply want to throw hard, harder, hardest, but a change-up is evidence of a different mindset.

Currently, Guillon's repertoire is plagued by inconsistency, including in both fastball velocity and command of his curve ball. Unlike Tony Cingrani, who only has to develop an effective breaking ball, Guillon has to refine two pitches. While Guillon clearly needs to improve his arsenal, time may not be on his side.

Accordingly, from this point forward, sending Guillon to the minors will burn an option year. Players typically have three option years, though in some select circumstances a fourth option year is awarded. As a result, Guillon, who has four levels to master and only three years to do so, will have to pick up the development pace to avoid running out of option years prior to being polished enough for the majors. It's certainly feasible, but any setbacks could become very problematic. If his option years outrun his development, then the organization might be tempted to shift him to the bullpen to speed the development process.

The 2013 season will provide a telling data point for Guillon's career path. He's an interesting prospect with a solid current performance level and enough upside to project as an impact pitcher if all goes well in his development. At the same time, there is some development risk, a risk that's heightened by his injury history and truncated development period. In fact, he brings more risk to the table than I anticipated heading into this write-up.

So, the risk of flaming out is high, but the ceiling is considerable. If everything breaks right, he could be a #2/3 starter down the road. For now, Guillon's combination of upside projection and downside risk lands him at #8 on the list, though that combination also creates greater potential for rising/falling on next year's prospect list. It would be encouraging to see him both reach high-A in 2013 and log some quality innings.