Gelalich provides a very nice blend of tools and skills. Given the new spending caps imposed by MLB on both the amateur draft and international free agency, organizations, more than ever, need to be right in their draft choices. Commonly, "tools" drive a player's ceiling, while "skills" determine his floor. How many elite athletes (players who could run, throw, hit for massive power) have struggled to find baseball success because they struggled to make contact, recognize pitches, or be patient enough to dictate the terms of the At Bat? You can't get to elite tools if you don't possess underlying baseball-specific skills. For hitters, pitch recognition and plate discipline can significantly reduce the risk of flaming out.

Gelalich features both good pitch recognition and a disciplined approach, which should effectively raise his floor, while offering enough tools to give him a good ceiling. His combination of tools and skills makes him a good addition to the organization, especially in light of his significant college experience.

The Reds selected Gelalich as a junior out of UCLA with the 57th overall pick in the 1st round of the 2012 draft. He was previously drafted out of high school in the 41st round by the Philadelphia Phillies in 2009.

All in all, it was a successful collegiate career defined by a nice blend of consistent on-base ability and solid speed. As a junior, he flipped the power switch, resulting in a slugging percentage over the .500 mark for the first time and a climb up draft boards around the league. The Reds didn't let him slide into the second round.

Obviously, an inauspicious start and not the type of performance you'd expect out of a polished college prospect in a rookie-level league. Elite collegiate programs, of which UCLA is one, face competition that is widely regarded as being of significantly higher quality than what resides in rookie leagues. So, in theory, Gelalich was facing weaker competition than he faced in college.

On the plus side, he hit line drives at a 22% clip, which arguably supports a higher BABIP than the .337 mark he posted. On the downside is obviously the strikeouts, as he whiffed in 28.8% of his plate appearances, which is an alarming rate considering the level of competition. He simply shouldn't, in light of his experience, have had that much trouble making contact.

The sample size is too small to support any meaningful conclusions, especially since he was both (A) getting his first taste of professional baseball at the end of a long collegiate season and (B) playing through a variety of nicks and bruises, including a hand injury.

At the plate, Gelalich uses solid, fundamentally sound mechanics. He starts from a crouch with a slightly open, wider than shoulder-width stance. He uses a high back elbow and a small bat waggle in his pre-pitch stance, holding his hands in front of his back shoulder. The defining characteristic of his swing mechanics is an unusual stride.

Gelalich's stride is unusual for two reasons: 1) there is very minimal movement involved, and 2) at first glance it appears almost disconnected from the rest of his swing. He starts his stride early in the swing, lifting his foot off the ground a minimal amount and then, rather than falling naturally, jabbing it back to the ground. When he jabs it back to the ground, his heel frequently appears to touch before the toe, which gives the movement an awkward, jarring appearance. All of this motion occurs somewhat before the rest of the swing, which raises the question of how he can effectively sync the movements of the upper and lower body to generate power and avoid being a largely upper body hitter. To do so, Gelalich has incorporated a second phase to his stride.

After Gelalich jabs his stride foot back down into the ground, he immediately rises up onto the toe of that foot. In so doing, he also rises up out of his crouch, standing somewhat taller, and rotates his front hip inward to generate load. His stride almost looks like a quick jab step followed by a bounce up onto the toe. This second phase, rising up onto the toe, is more timely and more closely resembles the strides of other hitters.

Once he gets up on the toe, his weight has shifted towards the back foot, he has drawn his hands back into proper hitting position, his hips have cocked, and he's ready to drive forward to meet the pitch. As the heel of his stride foot returns to the ground, he fires the swing. 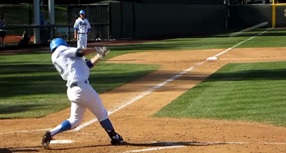 While the stride is unusual, the rest of the swing is not. Once he finishes the stride, the swing becomes very simple and very fundamentally sound. The hips fire first, generating good rotational energy driving him up onto toe of his back foot. He firms up the front side properly in order to effectively transfer that energy to his swing. He maintains good balance throughout and keeps his head still and on the pitch, both of which are benefits of using a wide-base. He does a nice job of consistently getting the barrel of the bat on the pitch and effectively utilizing all fields. He has become more adept at turning on inside pitches with power and driving outside pitches to the opposite field. After contact, his left hand typically comes off the bat, his body rotating to allow a complete follow-through which leads directly to his first step out of the box.

Some scouts feel Gelalich has a hitch in his swing, but I don't see it. When a hitter uses a hitch, it's frequently a movement of the arms that serves as a timing mechanism, but Gelalich's timing mechanism is his stride. The two-phase stride is somewhat unusual, but his upper body movements are smooth. He drops his back elbow as he completes his stride and drives forward to meet the pitch. He keeps his arms in close to the body as he brings the bat into the zone, which reduces drag on the rotational force generated by his body, but his arms have a tendency to drift too far forward to reach the contact point (see below photo). The drift occurs when he doesn't let the pitch travel deep, instead reaching to contact the pitch well out in front of the plate. 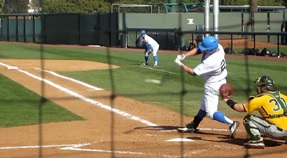 Consistently reaching for the pitch to make early contact could have negative consequences, including (1) acting as a drag on the force generated by the body and thereby reducing power generated by the swing and (2) leaving him susceptible to good offspeed pitches, as he could be caught out on the front foot much more easily and have less time for pitch recognition before firing the swing. More advanced pitching could exploit this tendency if Gelalich does it on a consistent basis going forward.

Here's a look at Gelalich in action during his 2012 junior season courtesy rkyosh007 on YouTube:


And, another look at Gelalich courtesy of rkyosh007 on YouTube:


Overall, Gelalich has simple, fundamentally sound mechanics. He maintains good balance and has a line-drive swing that enables him to drive the ball to all fields. His stride is minimal and unique, but he still gets into proper position to fire the swing. It's possible that his unique stride will impact his ability to hit for power, but the second phase of his stride is likely to sync up his upper and lower body to allow for sufficient power production at the professional level. The only other possible issue, which is more likely to prove problematic, is whether his arms consistently drift too far forward to accommodate an early contact point.

In addition, like Jesse Winker, Gelalich's on-base ability will give him a reasonably high floor. He has good pitch recognition, which should reduce his performance risk, while his intriguing power/speed combo gives him a potentially high ceiling.

For the Mustangs, Gelalich played in 35 games, including 34 in right field and 1 in left field. During his time at UCLA, he improved both his reads and routes. He has a solid arm that plays in rightfield, but could ultimately be better suited to left field.

Given his speed and athleticism, I wonder if giving him a look in center field would be worth the organization's time. It might be a stretch, but it would also take pressure off the development of his bat. College players aren't always slotted into the highest defensive position that they can handle on the defensive spectrum. For example, Jed Lowrie played primarily second base at Stanford, but was moved over to shortstop at the professional level. It might be worth a shot and it certainly wouldn't harm his development.

At the very least, defensively Gelalich should be a solid-average corner outfielder with the reasonable possibility that he'll provide even greater defensive value.

Gelalich has a lot to recommend him. For a college player, he has nice tools. Overall, I like his swing mechanics and his ability to consistently hit hard line drives. His disciplined approach is very encouraging, as is the organization's decision to select disciplined hitters with back-to-back picks in the 2012 draft. The organization is in good shape at the Major League level with significant young talent holding down key spots. However, at some point reinforcements will be needed and, ideally, when they arrive they'll bring a disciplined approach right along with them. If everything breaks right and he reaches his projected ceiling, then Gelalich would be a dual threat, solid power and solid speed, with the ability to get on-base at a high rate.

Gelalich's substandard debut raises questions that he'll need to answer with an improved second act, but there are enough mitigating circumstances (tired from long season, switched to wood bats, nicked up by injuries, first taste of pro-ball, etc) to warrant the benefit of the doubt. For now, his solid blend of tools and skills lands him at #9 on the list.