Sometimes a picture is worth a thousand words. That rings especially true when talking about the mechanics of baseball, as a visual frequently drives home a point more effectively than eight paragraphs of labored description.

So, I'll keep this short and sweet. The below Cingrani photo more effectively illustrates one of the key tenets of kinetic-chain pitching mechanics than I ever could.

I've written at length about kinetic-chain pitching mechanics and the benefits they can have on both performance and injury prevention. Part of the reason why I'm so high on Tony Cingrani is his mechanics. Since he's the flavor of the month, it's worth highlighting part of what makes him so effective.

Here's a look at Cingrani in action against the Marlins: 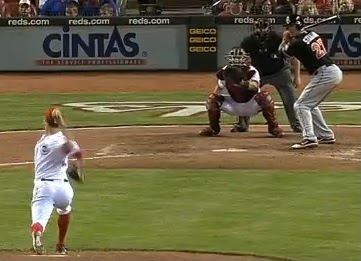 The earlier rotation of the hips creates significant tension in the spine. That tension creates energy that moves from the hips to the shoulders to the pitching arm as the spine uncoils. Cingrani's delayed shoulder rotation basically results in the pitching arm being pulled around by the energy of the body, rather than having to rely on the arm itself to generate that energy.

Cingrani's effective use of kinetic-chain mechanics is part of what makes his fastball so effective. And, it should have the added benefit of reducing the risk of arm injury.